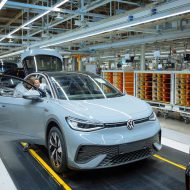 SpaceX just unveiled Starshield, a version of star link specially dedicated to governments. The company observes the potential of its Internet satellite network in the military sectorand intends to capitalize on it.

The use of Starlink has greatly evolved

The primary objective of the Starlink constellation was to provide a high-speed Internet network in the most remote areas of the world. For several months, however, satellites are used by Ukrainian soldiers to fight the Russian armed forcesdemonstrating the capabilities and possibilities of the network offered in a military context.

In the same category
Semiconductors and electric vehicles: Europe and the United States want to reduce their dependence on China

In addition, the US Space Force, branch of the US military established by Donald Trump, is a regular SpaceX customer to launch its satellites into orbit, while the US Air Force signed a $1.9 million contract with the company to deploy Starlink at its military bases in Europe and Africa. Last month, the Pentagon tested the network in the Arcticreports The Verge. The constellation’s link with the US government is such that China is concerned about it, and is thinking about a way to put him out of harm’s way in case of conflict.

Elon Musk’s company has decided to exploit the potential of its network, while the Federal Communications Commission (FCC) has just granted it the right to launch 7,500 additional satellites in low orbit.

How will Starshield work?

On his website, SpaceX now introduces Starshield, a network for government use. ” Starshield leverages Starlink technology and SpaceX launch capability to support national security efforts “, explains the firm. The network is based on three distinct axes: imaging, communications and hosted payloads »these will allow customers to customize the body of the satellite by adding the sensors and hardware they need.

If Starlink already offers end-to-end encryption of user data, Starshield will have additional security elements to meet ” to the strictest government requirements ». SpaceX also explains that inter-satellite laser communications, which it currently has to connect its Starlink satellites, can be added to satellites “ partners », so as to connect the government systems of other companies to the Starshield network. SpaceX will also be responsible for building the antennas on the ground, launching the satellites and operating the network in space.

For the time being, the company has not revealed the price of subscription to Starshield, but this new network demonstrates SpaceX’s ambition to diversify its Internet offer. As a reminder, she wants her networks to bring her, from 2025, 30 million dollars a year.

SpaceX unveils Starshield, an Internet network for military use