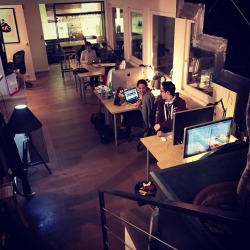 Thousands of high-speed internet satellites to be put into orbit in five years: it’s a space feast thatAmazon invited three launch companies on Tuesday, including Arianespace, which thus sees its order book for Ariane 6 almost triple. “the signing of agreements with Arianespace, Blue Origin and United Launch Alliance (ULA) for providing heavy-lift launch services as part of Project Kuiper, Amazon’s initiative to increase global broadband access through a constellation of satellites in low Earth orbit. »about 600 km above sea level.

“The contracts provide for up to 83 launches over a five-year period, allowing Amazon to deploy the majority of its constellation of 3,236 satellites”the company said in a statement, claiming “the largest commercial acquisition of launchers in history”. ULA won the largest share of contracts, with 38 launches. This joint venture between the American giants Boeing and Lockheed Martin, which operates from Cape Canaveral in Florida (southeast), will invest to have a second platform on this emblematic site of space history and which will allow “high-speed operations” for its Vulcan Centaur heavy launcher.

For its part, Blue Origin, which like Amazon was founded by the billionaire Jeff Bezos, was awarded 37 launches, including 15 as an option for its giant New Glenn launcher. But Blue Origin will also benefit from the ULA part of the contract since it builds the Vulcan Centaur engines. The only non-American player in these agreements, Arianespace, responsible for the marketing of European launchers, is entrusted with 18 launches, “a great moment in history” of the company, commented its executive chairman, Stéphane Israel, quoted in the press release. They will be carried out by Ariane 6, the new launcher manufactured like Ariane 5 at Les Mureaux in the Paris region, and which must carry out its first qualification launch at the end of the year from the Kourou space center in French Guiana.

The contract nearly triples the order book for Ariane 6, which so far stood at 11 shots. ” For the 18 of us, it was the right number, at the same time we wanted something absolutely massive and this is it, it is by far the most important contract that we have ever signed, and at the same time we wanted obviously keep our commitments and keep availability for other customers »in addition to the four annual launches intended for European institutions, explained Mr. Israel to AFP in Colorado Springs (Colorado, west) on the sidelines of a congress bringing together the major players in the space sector.

Neither the amount of the contract nor the start of its implementation have been specified by Amazon or Arianespace. But Mr. Israel said he expected “six (shots) per year over three years”. Each Ariane 6 will carry around 35 Kuiper satellites. Amazon had already said to invest “more than 10 billion dollars” in the project, an amount to be compared to the 14.3 billion dollars of net profit that the colossus of online sales has earned for the fourth quarter of 2021 alone. The company thus wants “to provide low-latency broadband to a wide range of customers, including individual homes, schools, hospitals, businesses, government agencies, rescue teams, mobile operators, and other organizations working in remote locations no reliable internet connection“.

Kuiper will rely, in addition to the cloud computing service Amazon Web Services (AWS), on “Amazon’s experience in producing low-cost devices and services, such as Echo and Kindle, to provide an affordable and accessible service for customers”, promised the Seattle-based firm in the northwest of the United States. Huge as it is, Amazon’s high-speed satellite internet project isn’t the first. The Billionaire Elon Musk, a rival to Mr Bezos, is rolling out its Starlink network, which claims more than 100,000 subscribers. The British company OneWeb, taken over after a bankruptcy, has already sent some 428 of the 648 satellites planned for its own service.

To communicate on FrenchWeb or the Journal des RH, please send us your emails to redaction@decode.media

The latest articles by the editorial staff (see everything)