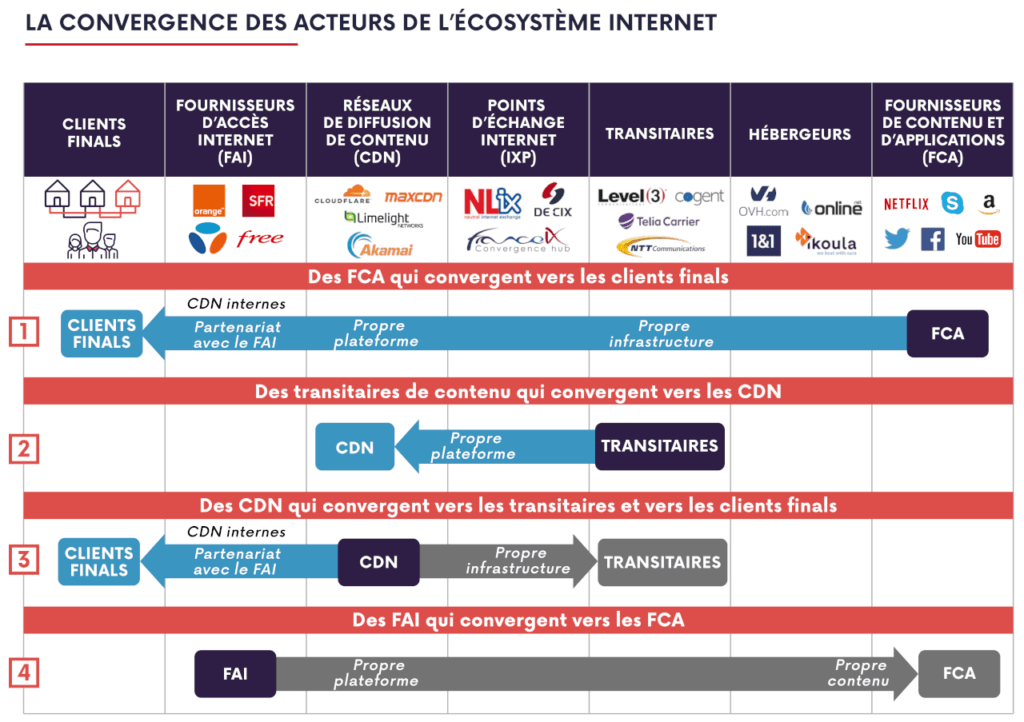 Cogent and Lumen: two names that mean nothing to the general public. However, these are two very important companies for the proper functioning of the Internet on a global level. They are, in a way, the “backbone” of the network. And they decided to cut themselves off from Russia.

Should the growing isolation facing Russia due to the war in Ukraine extend to the Internet? It is clear that this is a subject that has been growing for several days. Since the beginning of the invasion, reflections of this type have flourished, especially on social networks, to somehow imitate what has been done with the Swift banking network.

So far, the most visible actions in this area have taken place on the web: more and more Western companies (such as netflix, Facebook, TikTok, etc.) have for one reason or another stopped providing their services in Russia. The already long list companies taking action to protest against Moscow should stretch further.

But there is also excitement behind the scenes, far from the eyes of Internet users. And this upheaval could well lead to more serious problems over connectivity with Russia, if the movement continues to spread. Indeed, American companies specializing in network interconnection have decided to stop sending traffic to Russia.

Major internet backbones are distancing themselves from Russia

This is reported on March 8, 2022 on his blog Brian Krebs, journalist specializing in computer security. It reports the decision of the American company Lumen Technologies to no longer carry traffic for organizations that are based in Russia. However, Lumen Technologies is a company that is at the head of one of the most important “backbones” of the Internet.

The expression is intended to be very telling: the backbones of the network (or ” backbones in English) are like the backbone, the backbone of the Internet. They play the role of main support for telecommunications. In short, it is the framework around which the other players on the net organize themselves, such as operators (ISPs) and content providers.

It was the situation in Russia that led Lumen to halt its activities there, reads a statement shared by Brian Krebs. Lumen is one of the largest backbones: its group carries a significant percentage of global Internet traffic. It bought another freight forwarder, Level 3 Communications in 2016 for $24 billion.

Lumen evokes a risk to the security and integrity of its networks, those of its customers and more generally the Internet. ” We have decided to disconnect the network due to the increased security risk inside Russia “, we read, even if no disturbance was noted. But the environment is more and more uncertain and an escalation of the Kremlin is feared.

According to the company Kentik, Lumen is by no means a second-class player in the country: it is described as the leading international transit provider, with Russian telecom giants Rostelecom and TTK as customers, as well as the three main mobile operators ( MTS, Megafon and VEON). It is a major player, including among the backbones.

This is also what the French telecoms regulator points out. Lumen (which was called CenturyLink before 2020) is a first level freight forwarder (Tier 1), alongside major ISPs (AT&T in the United States, Deutsche Telekom in Germany, NTT in Japan, Orange in France, etc.) and specialized groups, such as Hurricane Electric, Cogent or Global Telecom & Technology.

Tier 1 freight forwarders, detailed the Electronic Communications Regulatory Authority, are ” players who have developed a long-distance network and have direct interconnections with other major operators worldwide. They do not use any transit service to access all the networks that make up the Internet. »

Global connectivity between these operators is based on “peering” agreements, i.e. interconnections ” allowing two operators to exchange directly the traffic they mutually send to their respective customers. Thus, each actor only gives access to its network, making this link mobilizable only for the traffic of its customers. »

It remains to be seen what real impact Lumen’s decision will have in Russia and, above all, if it will spread.

If other leading freight forwarders follow the same trajectory — Cogent already does, as reported The Register March 4 – Russian connectivity is expected to suffer. But the movement is not widespread: other Tier 1s continue to have a presence in Russia, like Hurricane Electric with this tracking tool for Rostelecom.

At washington post, the boss of Cogent also mentioned a security risk that justifies cutting his links to Russia. He didn’t want to stop Russian netizens from going online, but he raised the prospect of the Kremlin exploiting Cogent networks for cyberattacks Where spread propaganda targeting Ukraine.

On his blog, Kentik showed graphs illustrating the effects of Cogent’s disconnection using the example of VEON, a major mobile phone operator. We can thus observe the end of Cogent’s activities and a relative drop in overall traffic, given the fact that there are other active forwarding agents (Lumen, Vodafone, Arelion) at the time of the capture.

However, this does not mean that Russia is offline. Today, the Internet remains functional in the country. What this can cause in the short term, however, is a reduction in the amount of overall bandwidth available to circulate data with Russia, notes Kentik, if no freight forwarder is able to take the missing load at its account.

For the Russians, this could therefore translate into difficulties in connecting quickly and well to the services that interest them: in short, we could soon observe increased congestion of the networks on site – especially if other freight forwarders, starting with the American Tier 1s, follow the movement and decide not to route any more traffic between Russia and the rest of the world.

Will this happen? the fog of war makes any scenario uncertain, but each of them still seems plausible today — just look at the Swift case. One thing is certain, observes Kentik: For a backbone operator to disconnect its customers in a country the size of Russia is unprecedented in the history of the Internet. »

Russia loses part of its interconnection with the Internet