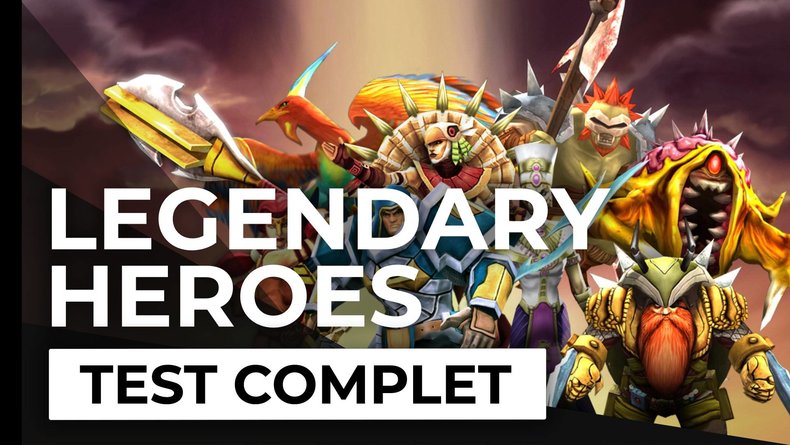 Legendary Heroes is a MOBA type game that has a particularity… It is played solo. Originally a mobile game, does this port to consoles turn out to be of good quality, or should we ignore it?

You can embody many heroes

The MOBA genre was popularized quite a while ago thanks to League of Legends, although it wasn’t the first of its kind. If you are unfamiliar with this style of games, these are quite simple to understand. Characters compete in an arena, and are usually accompanied by minions who allow you to advance through the map. The goal is to destroy the opposing buildings to achieve victory.

Legendary Heroes is no exception, and works exactly the same way…in its own way. The main concern of the game comes above all from the fact that it was originally a mobile game. We are dealing with a very similar port, and as much to say that the frustration will take precedence very quickly, as the maneuverability is not adapted to the support..

Unlike most MOBAs, here you will not progress directly in the game, but outside of it. Indeed, after each won game you will get a chest, provided you do not already have three being unlocked. First legacy on the mobile side, you have to wait 10 minutes in game time to be able to open one. Each of the chests will give you gold to buy various items before or during the game, and especially character cards.

You have to destroy the enemy base to achieve victory

These are the most important element of your champions. In order for them to level up, a certain number of cards must be obtained. For example, to go from level 3 to 4, it will take 5. And that’s where the shoe pinches. It is strictly impossible to improve other than by these cards, which are obtained completely at random when opening a chest, between all the different characters available, whether they are unlocked or not.

To give just one fairly glaring example of the problem, during one of the game’s sessions, our characters were still only at level 3 because all the cards were dispatched to all the champions. However, the enemies were already at least at level 13, making progress almost impossible. The only way is to go back to previous stages and farm for tens or even hundreds of hours hoping to get the right cards. All of this is certainly suitable for free-to-play mobile, but terribly exhausting in a paid console game, especially when there is no alternative to progress.

As we have just said, the game is not a simple MOBA where you can chain games. No, the goal is to succeed in getting rid of the different levels of the game each time with predefined enemies in front of you, making everything very repetitive, and once again frustrating because of the progression of the characters since you cannot advance through this system.

Levels are getting harder and harder

In addition, the title suffers from many other problems, starting with its just awful handling on the controller. Navigation in the various menus is abominable and it is sometimes necessary to press the triggers to go to other menus and this without any logic, making everything absolutely counter-intuitive to the controller.

Yes, menus are one thing, and you don’t spend your life inside. But when the title also has the luxury of playing very badly once in part, that’s another! Indeed, there is a kind of latency on the movements of the characters because they do not move smoothly. It’s very hard to explain, but it’s like our avatar moves from one square to another, and can’t change direction until we reach that square. A real heresy for a genre that requires you to move dynamically to dodge enemy attacks while dealing blows.

Yes, we can hit the opponents… when the game wants it. Because indeed, we also find problems to be able to show our opponents who is the boss. In easily half of the cases when you try to use your basic attack, the game will indeed indicate that you are going to launch a strike, but this will be canceled directly and this for no reason, including when we are glued to the target, be it a champion or a building… Simply incomprehensible!

Legendary Heroes still has a good idea, like leaving a limited time for each game. Towers destroyed and champions killed earn points and if the main building is not destroyed at the end of regulation time, the team with the most points wins.

You can use objects

However, as a general rule in MOBAs, towers are objectives that must be attacked with the help of his minions to avoid taking hits and dying stupidly. Nay, here the towers do almost no damage, and the projectile is so slow that it is possible to move without ever being hit. Go headlong and smash everything, it works!

And don’t rely on the AI ​​to stop you. This one has been coded so as to follow a specific path, to type what it crosses on its way and to eventually follow the target without conviction or motivation. Yes, it is quite possible to head towards the opponent’s main building to achieve victory without any reaction from the opponents, although destruction is almost impossible if you run out of levels due to lack of cards or money.

Test conducted on Xbox One.