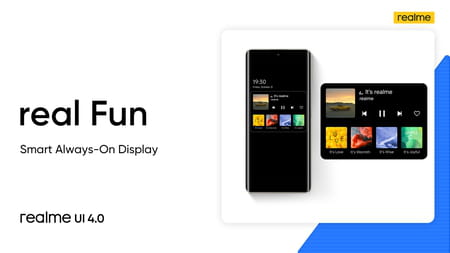 In full conquest of the market, Realme wants to mark the difference with UI 4.0, the new version of its house overlay with Android 13, which will arrive very quickly on smartphones of the 10 series, and the future 10 Pro and 10 Pro +.

Still relatively young, Realme has managed to make a name for itself in the smartphone market in recent years by focusing on the quality-price ratio and the seriousness of its products, a bit like Xiaomi. It must be said that this Chinese manufacturer was originally a subsidiary of the giant Oppo before flying on its own in 2018, while still belonging to the same group, BBK Electronics, just like OnePlus. In Europe, Realme has even managed to rise to fourth place among smartphone sellers, behind Samsung Xiaomi and Apple, which shows great dynamism. And the manufacturer intends to continue its momentum in 2023, both by offering new models and by developing what matters most on a daily basis: the software.

Thus, Realme has just announced the upcoming arrival of UI 4.0, the new version of its in-house overlay which is based on android 13, the latest version of Google’s mobile operating system. Proof of a desire to follow very closely the latest innovations in software. In fact, unless you have a Pixel smartphone from Google, it was often difficult to take advantage of major Android updates quickly. The new versions of the American giant’s system always take a little time to arrive on the telephones of manufacturers who must adapt their in-house software overlay so that it complies with the novelties induced by Android. However, for this year 2022, the situation is more encouraging than in the past. Where we often had to wait more than six months to see the latest version of Android appear, the deadlines seem to be getting shorter, especially among the big names in the field such as Samsung or Oppo which already have devices running Android 13. Xiaomi is only beginning to roll out this system, starting with one of its latest models, the 12 Pro, to Chinese audiences at the moment. The arrival of Android 13 at Realme for the spring of 2023 in France is therefore a good sign to quickly follow the trend.

Of course, Realme will take advantage of UI 4.0 to integrate the latest Android features. On the program, an Always On Display mode (screen always on) revised to accommodate a music player allowing playback control.

Realme also announces more fluidity in the handling of the interface and new functions to improve confidentiality. For example, it will be possible to automatically pixelate photos and names in screenshots. The interface also gets a slight makeover to adapt to the Android 13 era with neater icons and tiles.

To extend the movement to establish its notoriety, Realme will also offer two new mid-range smartphones in 2023: the Realme 10 Pro and 10 Pro+, which will immediately benefit from Realme UI 4.0 with Android 13 and which display a rather attractive technical sheet. for a price no less attractive (if it does not fly away upon arrival in our territory). The Realme 10 Pro+ in particular arouses curiosity with its 6.7-inch curved Amoled screen refreshed at 120 Hz.

The Realme 10 Pro, for its part, has a lighter technical sheet with a 6.7-inch LCD screen, a Snapdragon 695 Soc supported by 8 or 12 GB of RAM. The photo is entrusted to a main module of 108 Mpx and a secondary module of 2 Mpx for portraits. The battery is the same as its big brother but accepts a 33 W charge. Its price: 319 dollars (about 310 euros).