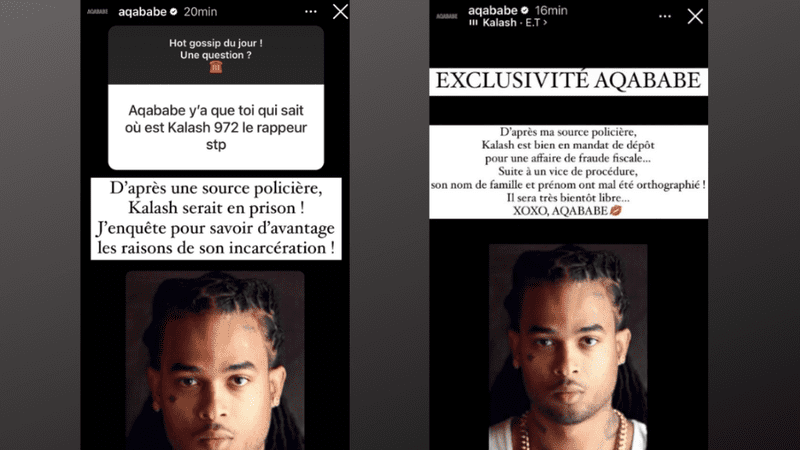 An Instagram account specializing in rumors assured this January 4 that the Martinican rapper Kalash was in prison. What cause a cloud of messages on social networks … and the reaction of the concerned.

“According to a police source, Kalash is in prison!” These few words posted at the end of the morning on an Instagram story of the Aqababe account, followed by 782,000 people, resulted in hundreds of messages on social networks. “If true, Kalash will be mentally destroyed”, “we thought he was sick”, “we don’t know at the moment, but he canceled two concerts for health reasons and didn’t post any stories or photos after that so let’s hope he’s fine”… So many messages, sometimes amused, sometimes worried, which poured in, placing the name of the Martinican rapper in French trends on Twitter.

The Aqababe account was responding to a question from a subscriber who was worried about Kalash’s whereabouts. The rapper has indeed recently canceled two concerts, scheduled in Lyon and Strasbourg on December 14 and 15. “According to my police source, Kalash is in custody for a tax evasion case”adds Aqababe around 2:30 p.m. “Following a procedural defect (…) he will be free very soon”specifies the account.

But a few minutes after this new post, Kalash’s official account shared a message from Specta, a rapper and YouTuber from Martinique, followed by the artist. In this one, with screenshots in support, Specta assures that Aqababe’s information is “a lie”, whose only source would be a message sent by an anonymous account, and not a police source, as indicated in the first place. He attaches to the tweet a video of Kalash playing a video game, filmed from what looks a lot more like his living room than a prison cell. “Yeah, January 4th, I’m in the gulag”comments, amused, the singer.

Since then, the stories from the Aqababe account have been deleted. Contacted by Outre-mer la 1ère, the owner of this account informed us of exchanges with Specta to defend himself from having relayed information without verifying it. “Yes, a fake account wrote to me, I replied “eh” and I asked my sources”, assures Aqababe, attaching screenshots. In these, we see that Aqababe asks at least two people for information about Kalash, stating his marital status. “He had a last case in November for tax evasion but impossible to get into it, it’s weird”, responds to one of “sources”.

“Stop believing all these blogs, even with so-called ‘sources’, be more suspicious”, posted Kalash. Discreet in the media, neither the artist nor his entourage responded to our requests.