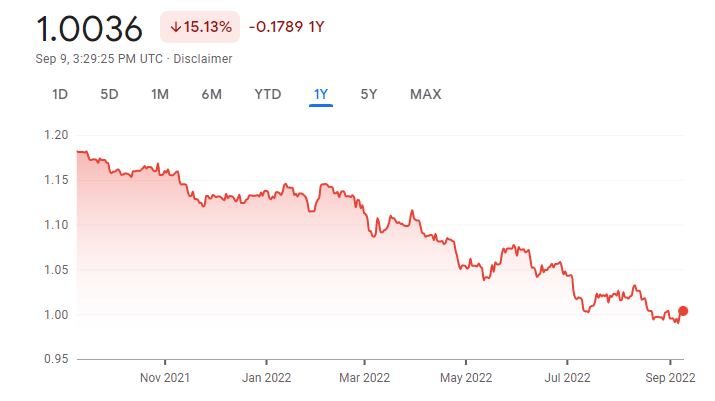 News hardware Price of the iPhone 14 in France: is it really 30% more expensive than in the United States?

During the Apple Keynote of September 7, 2022, hope was allowed for a few minutes when the dollar prices of the iPhone 14 were announced, to finally disappear in stride when the prices in euros were posted on the official website. . The rumors were true, the iPhone 14 does indeed exceed 1000€.

iPhone 14: is such a high price deserved?

This Wednesday, September 7, 2022, we had the right to the traditional Keynote back to school, a conference in which Tim Cook announced the novelties of the apple. Live from the gardens of Apple Park in Cupertino, the CEO has therefore lifted the veil on three new models of Apple Watch (Series 8, new SE and Ultra), on the new AirPods Pro model but also and mostly on the four new iPhones (iPhone 14, 14 Plus, 14 Pro and 14 Pro Max).

This Keynote was therefore an opportunity to see if the rumors of the last few months were good and very true, especially the one concerning the prices of the new iPhone 14 models, since according to the rumors of the pre-conference corridors, the value of smartphones was supposed to exceed 1000€. During the live presentation, Apple announced a price of $799 (tax-free) for the base model in the United States. Some may therefore have thought for a moment that the rumor was false, but… the hope was brief since a few minutes later the official French site displayed a price of 1019€ (all taxes included) for the iPhone 14.

Which gives us concretely:

As a result, it is now legitimate to ask whether this price is justified. Well difficult to answer, since this increase is not really related to the product itself. Of course, the iPhone 14 is a better smartphone than the iPhone 13but that price hike isn’t something Apple wanted to inflict on its brand new baby. In fact, it is rather the value of the euro against the dollar which is the major reason for the price increase of the smartphone.

Why such an increase?

Now that we know the main reason for this increase, we must ask ourselves what is behind this change. In fact, it’s quite simple, the main cause of this depreciation is the invasion of Ukraine by Russia, which had the effect of upsetting the European balance.

To better understand, the Public Life website gives us this explanation: “the euro-dollar parity means that, for one euro, you can only buy one dollar. This is a first since 2002. In 2008, for example, you could buy for €1 or $1.60. A weaker euro means a stronger dollar: anything imported from the United States or priced in dollars becomes more expensive”.

So is the iPhone 14 really 30% more expensive with us?

Once we have taken all these parameters into account, we can answer our initial question which was: “Is the iPhone 14 30% more expensive than in the United States? ». The answer is no, but the Apple smartphone is still more expensive in France than in the land of Uncle Sam. The difference, we owe it mainly to our tender and dear French VAT which is fixed at 20%, while in the United States it is on average equal to 5% (each US state has a different VAT).

Thanks to the calculation above, we can say that the price of the iPhone is more expensive in France by 21.45%. But rest assured, we are not the country where the iPhone 14 is the most expensive. In Brazil, for example, the smartphone is sold for €1,458. But this is not the worst, since in Turkey the latest Apple is sold 1700€. A price that is partly explained by the inflation currently affecting the country (more than 80%).

Price of the iPhone 14 in France: is it really 30% more expensive than in the United States?


Find here our social media profiles and the other related pageshttps://yaroos.com/related-pages/