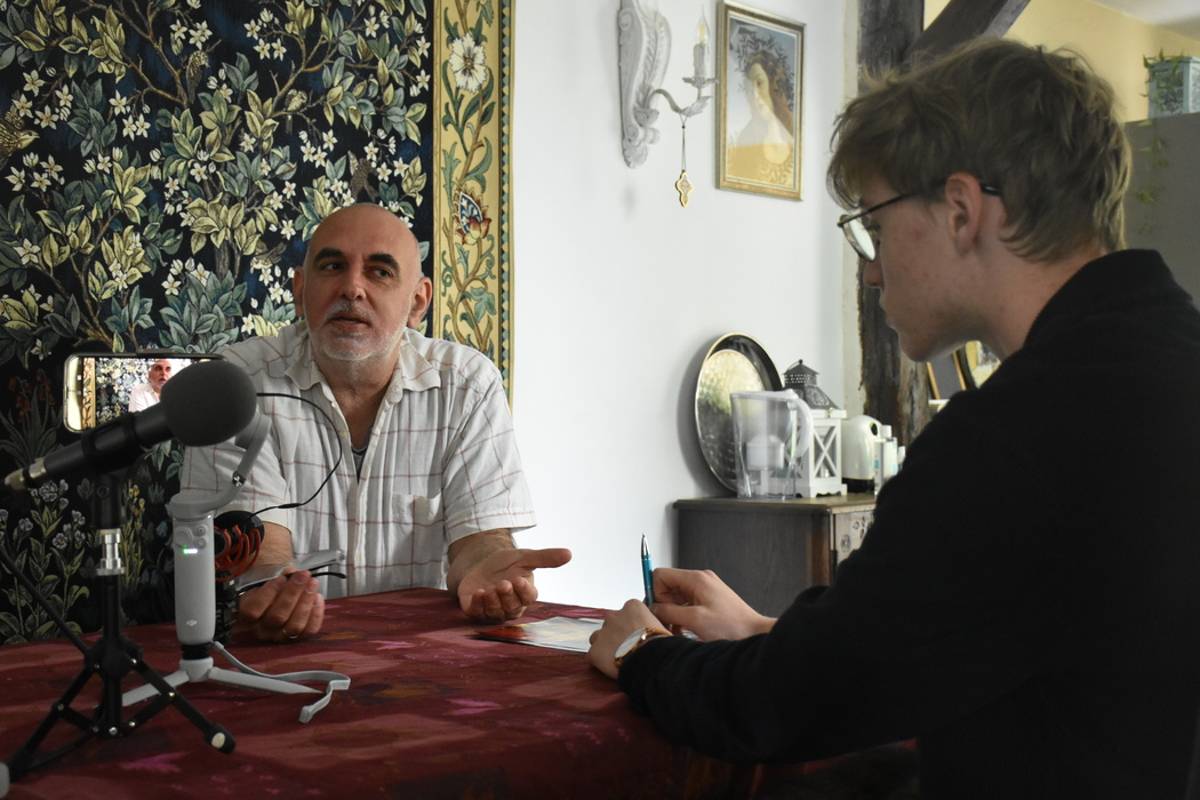 Can you be a teacher and do history without being a history teacher? The question does not arise for Xavier Collet, who teaches economics, management and finance at the Saint-François-de-Sales high school in Gien.

His website “Histoires de Gien” proves it, since it was notably hailed recently on social networks by a certain Michel Tissier, former president of the Historical and Archaeological Society of Giennois (Shag).

Last week, in the living room of his Gienne pavilion, the fifty-year-old teacher was recorded by Maxence Simon and Charles Copin as part of a short film on Anne de Beaujeu which will be screened on Saturday June 18 at 2:30 p.m. at the château.

Receive our leisure newsletter by email and find ideas for outings and activities in your region.

Far from his original field of study, but close to the heart. “I’ve always loved history, says Xavier Collet. Even if I had no interest in medieval when I was young.” He preferred the contemporary era and its echoes with current events, in particular the Cold War which fascinated him.

Why, then, did you not choose these studies? “Because I was venal!, he laughs. Historically, I only saw the profession of teacher as an outlet, which did not bring in much.” All this to finally embrace the teaching career, although in another field. A height that amuses him a lot today.

Coming from Alfortville, in the Val de Marne, Xavier Collet settled in Gien in 2004. Over the years, he became more and more interested in the history of the institution Saint-François-de-Sales. In particular, he co-organized with other colleagues an exhibition for his 160th birthday in the form of a slideshow.

The thirst for curiosity then pushed him to take an interest in many parts of the history of France, with a preference for religious wars. “I must have read a hundred books and thousands of articles,” he said.

With the new heritage and historical route, the city of Gien will have no more secrets for you

Then, he wanted to explore the Gien aspects of this vast history of France. As he read, he began to create a huge text file in which he lists everything he discovers about the town in the east of Loiretall accompanied by footnotes in order to navigate through all the sources used.

“It’s a very large bibliography, he confirms. The text file is now nearly 700 pages.“The creation of its website, last year, responds to an objective of transmission and popularization. It is divided into fourteen parts which are written as and when. “I see Gien as a living being”, underlines- he.

The first part deals with the rare elements giving clues on the territory during Prehistory, then Antiquity. He would also like to complete this still very nebulous part. “We don’t have a lot of sources. It clearly lacks information on the ancient Gien“, he admits. Which did not prevent him from gathering interesting elements on Gallo-Roman life or the first Christians of Gien.

After a little over a year, Xavier Collet is at the ninth part, on the industrial age. Each section has several thematic episodes. In the case of the industrial era, it can just as easily dwell on the Restoration as on the agricultural show, the quays of the Loire, or cars.

“Each article must not exceed 8 minutes to read, he stares. The idea is to arrive at an easily accessible documentary base. But more than that, it is to allow interested people to discover the history of Gien through anecdotes. The little story in the big story.“

The finalization of the site is progressing rapidly. If all goes well, the last parts could be completed by early 2023. He only has five left.

What was Gien’s position in the face of the Paris Commune insurrection in 1871?