The Nothing phone (1) continues to show itself at the moment ahead of its official launch on July 12th. After the presentation of its design, we are now entitled to the first video grip of the smartphone and it is signed by MKBHD.

The announcement of the Nothing phone (1) is not expected before July 12, but the smartphone does not seem to want to wait and already wants to come out of hiding to reveal itself to the whole world. We had already been able to observe its design for the first time and learn more in a behind-the-scenes video of the brand and since thendevice was even put up for auction (only the first 100 models).

Limited edition #the100 units, available now. Only on @stockx: pic.twitter.com/cMvr4TMGTC

However, the smartphone is now revealed in a first video of complete handling.

A little tour of the owner

It was the YouTubeur MKBHD who had the privilege of this first test of the famous transparent smartphone. The company therefore continues to use teasing as a weapon of choice in its strategy by letting information filter through by small touches until its event.

This video allows us to have a better look at the complete front and back design of the smartphone. We can see here that the Nothing phone (1) will have a screen with borders in all equal parts and a punch for the front camera which will be located in the upper left corner of the screen. Screen whose exact dimensions are not yet known.

A bright back well put to use

As for the pattern on the back made up of LEDs, Nothing gave it a nice little name: the “Glyph”. These LEDs seem to be designed in such a way as to offer very specific and controllable uses via a dedicated interface. Called “Glyph Interface”, this page offers a lot of customizations related to the pattern on the back. 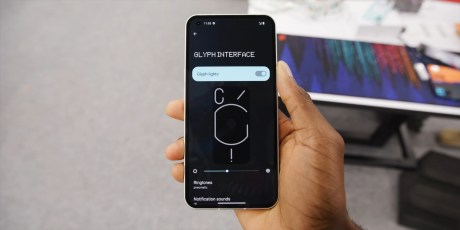 We will have, for example, light patterns that react differently to 10 types of ringtones. Each diagram can thus be associated with a particular contact. But also indications regarding phone notifications, the use of the Google Assistant, animations according to the user’s bedtime schedule, etc. The videographer specifies that at launch, we will be entitled to different types of light patterns for the notifications of certain applications.

The pattern can also react to more specific uses. The central part lights up when wireless charging, reverse or not, is in progress. The small exclamation point at the bottom is used to indicate the charging rate of the smartphone in real time. All you have to do is shake the phone to consult it.

The center of the pattern takes on a new utility when using wireless charging // Source: MKBHD

The same goes for the exclamation mark which turns into a charging indicator // Source: MKBHD

The smartphone’s LEDs can also light up in unison to serve as additional light for the camera, surpassing the power of a normal flash. A red LED is also placed on the back of the smartphone to indicate a recording is in progress.

It also has a red LED to signal a recording in progress // Source: MKBHD

The back of the phone can be used as a fill light // Source: MKBHD

A feature called “Flip to Glyph” also allows you to put the smartphone up to be able to use it in a less distracting way by receiving notifications and calls without light.

The “Flip to Glyph” function allows you not to use the LEDs of the smartphone to improve concentration // Source: MKBHD

The “Flip to Glyph” function allows you not to use the LEDs of the smartphone to improve concentration // Source: MKBHD

When you see all the uses that have been thought of here, it is clear that this pattern is in no way due to chance and that each detail can have its interest in use. It remains to be seen when and at what price it will be offered.

Nothing phone (1): here is the very first video of getting started with the smartphone