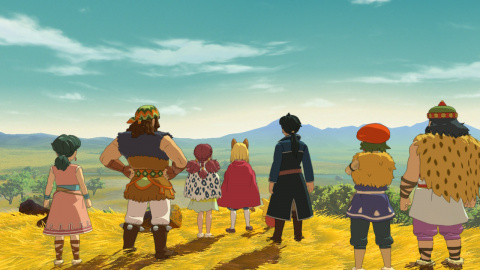 Game News Ni No Kuni: Cross Worlds is coming to mobile and PC sooner than expected

Initially announced in 2019 and expected in 2020, it took two more years for Level-5 and Netmarble to bring their mobile role-playing game to fruition. The good news is that it arrives early on mobile, but also on PC.

The universe of Ni No Kuni on mobile…

Ni No Kuni is best known for its first two role-playing games released on consoles.. First of all, the first, Ni No Kuni: Revenge of the Sky Witch, was released on Playstation 3 in 2013 at first then in a remastered version on PC, Playstation 4 and Nintendo Switch in 2019. In this opus, we played a young boy named Oliver while traveling through a magical world in which he tries to bring back his mother to life. A bit later, Ni no Kuni 2: Rise of a New Kingdom arrives in 2018 on PC and Playstation 4 and a little more recently on Nintendo Switch, in 2021, and whose plot takes place a few hundred years after the events of the first opus.

Ni No Kuni: Cross Worldswhich has been available for pre-registration and pre-order for some time, is billed as a massively multiplayer role-playing game on mobile. And if the App Store page indicated a release date set for June 30, 2022, it is through the brief trailer below that it is officially announced that the game will finally be released on May 25, i.e. a month earlier on iOS and Android, but also on PC.

Announced at the end of April, Ni No Kuni fans unable or simply unwilling to play on mobile will have the option of joining the adventure on PC. A cross-play feature will also be available to allow you to join other players, regardless of your gaming platform.

Remember that the game will have several character classes to choose from, enough to adapt to the fighting style of each. L’swordsman will delight fans of hand-to-hand combat while the witch will manipulate magic with his spear. The learned and the rebel, armed with a rifle or a bow respectively, will be ideal for players who specialize in ranged damage. Finally, the hammerer will allow us to move towards a more defense-oriented game.

Whether in PvP or PvE, the game offers an adventure with graphics made with Unreal Engine 4, all enhanced by the animations of the Ghibli studioand of which we can have a first glimpse in this music video on the You Tube channel of Ni No Kuni: Cross Worlds.

Note that additional rewards will be offered for any pre-registration on the App Store or on Google Play, it is a skin and more precisely a explorer outfitrecoverable via the in-game mailbox. Finally, players who also join the Discord server when the game is launched will be able to recover a Catarumpus hat and a special title via redeemable codes.

Ni No Kuni: Cross Worlds is coming to mobile and PC sooner than expected