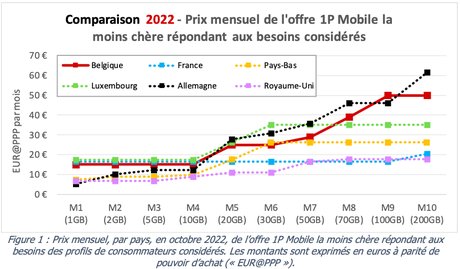 In France, strong competition in telecoms still allows consumers to benefit from prices that are among the lowest in Europe. Is that this confirms a study recently published by BIPT, the Belgian telecommunications regulator. Its services have compared the prices of mobile and fixed Internet plans in Belgium, Luxembourg, France, Germany, the Netherlands and the United Kingdom. Its results are clear: France crushes the competition in terms of low prices.

On the mobile front, French and British operators are the ones offering the cheapest deals. In France and across the Channel, it is possible to afford an extremely data-rich package for 20 euros per month. For this price, it is impossible to find better than an offer of 10 gigabytes in Belgium, Luxembourg or Germany… From 20 gigabytes per month, you have to pay, in these countries, nearly 30 euros per month. The bill is still soaring for high-end offers. In Germany, it takes at least 60 euros for a package with 200 gigabytes of data.

In fixed Internet, France, the country with the most fiber in Europe, offers the most attractive prices. And by far! In France, the price range of the offers (which range from the Internet connection alone, to those including television, fixed telephony and mobile) ranges from 20 euros to just over 40 euros. The price differences are sometimes huge with its neighbors. For an offer including very high-speed Internet (at 100Mbp/s), television and unlimited landline telephony, the cheapest offers are less than 30 euros in France, 40 euros in the United Kingdom, more than 45 euros in Germany, more than 50 euros in Luxembourg and 70 euros in Belgium. 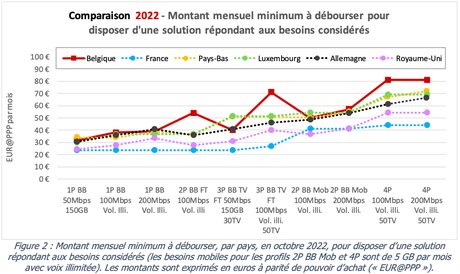 This study by the Belgian regulator will reassure French telecom operators, who generally believe that these low prices threaten the viability of the sector. On December 12, the French Telecoms Federation (FFT), the industry lobby, felt that this situation could no longer last. Especially in a context where Orange, SFR, Bouygues Telecom and Free are forced to invest massively in the deployment of fiber and the new 5G, while seeing their costs – and in particular those of energy – soar.

For a long time, Orange, SFR, Bouygues Telecom and Free sought to consolidate the market. A reduction in the number of players would, in fact, make it possible to reduce the intensity of competition, and thus easily raise prices… But all their attempts have failed in recent years. Now, most operators are looking to gradually raise their prices.

This is the case of Orange. As stated The gallery on December 14, the incumbent operator will increase the prices of all its offers from 1 to 2 euros from next March and April. The French telecoms leader considers that these increases are necessary in view of the economic context. Orange is “directly impacted by a sharp increase in its operating costs, particularly in terms of energy, procurement and materials”, he says. The operator expects, for example, to see its energy bill for the networks soar “by more than 120%” This year.