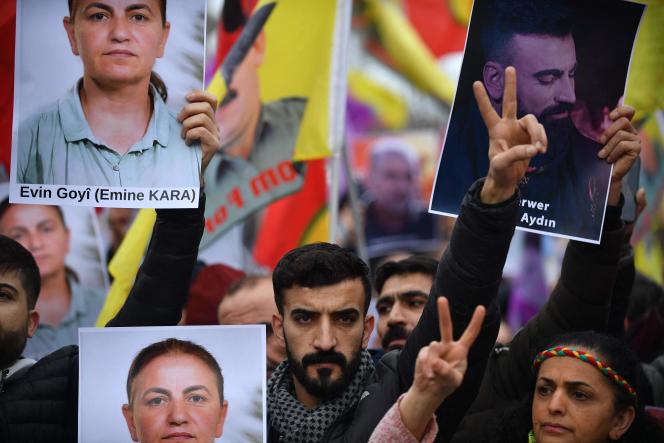 The custody of the suspected man of killing three Kurds with a handgun and injuring three others in Paris on Friday was lifted on Saturday, December 24, for health reasons, announced the prosecution of the capital. The man was hospitalized in the psychiatric infirmary of the police headquarters, the same source said.

“The doctor who examined the defendant this day at the end of the afternoon declared that the state of health of the person concerned was not compatible with the measure of police custody”underlined the prosecution. “The police custody measure has therefore been lifted pending his presentation before an investigating judge when his state of health allows it”he added, adding that the investigations were continuing.

Earlier in the day, the prosecution announced that the racist motive had been added to the investigation. Investigations now focus on acts of assassination, attempted assassination, violence with a weapon and offenses against the legislation on weapons of a racist nature. “The addition of this circumstance does not modify the maximum penalty incurred, which remains life imprisonment”also said the prosecution.

Read also: Article reserved for our subscribers The Kurdish community in shock and anger after the massacre in the rue d’Enghien

“France is in mourning”Justice Minister Eric Dupond-Moretti said on Saturday at the microphone of BFM-TV. “I wanted to recall the difference between a racist crime, by nature heinous, and a terrorist act: the difference is whether or not you adhere to a claimed political ideology”, continued the Keeper of the Seals, who met with a delegation from the Kurdish community. Eric Dupond-Moretti, by making this distinction, has thus justified that the National Anti-Terrorist Prosecutor’s Office (PNAT) has not, for the time being, taken up the investigation. On Friday, the spokesperson for the Kurdish Democratic Council in France expressed outrage at the fact that “the terrorist character is not retained” by investigators.

Shortly before noon on Friday, a man opened fire on rue d’Enghien, in the 10e arrondissement of Paris, in a shopping district popular with the Kurdish community. The suspect, aged 69, is a retired train driver of French nationality.

The facts took place in the Kurdish Cultural Center Ahmet-Kaya and in two neighboring businesses, including a hairdressing salon, also Kurdish. This center, a rallying point for the community in Paris, hosts the Kurdish Democratic Center of France (CDKF), which is the main emanation of the Kurdish nationalist movement in France and the legal front of the Kurdistan Workers’ Party (PKK), at war. against the Turkish state and considered a terrorist organization by the European Union.

Known to justice for three cases

Injured in the face during his neutralization, the suspect was immediately placed in police custody. He is known to justice for three cases. He had been sentenced for the first time, in 2017, to six months in prison suspended for possession of prohibited weapons. In June 2022, he was again sentenced, to twelve months in prison this time, for acts of violence with a weapon committed in 2016, a conviction which he appealed.

He was mainly indicted for acts of violence with a racist weapon which echo this killing. On December 8, 2021, he is suspected of having gone with a saber to a camp occupied by migrants, located in the 12e district of Paris. The man, who has not yet been tried for these facts, allegedly then injured two men with sabers and damaged six tents before being injured by the victims trying to disarm him.

Every morning, browse the main news of the day with the latest titles from the “World”

After a year in pre-trial detention, he was released on December 12, as required by law, and placed under judicial supervision, according to Paris prosecutor Laure Beccuau.

Read also: After the attack on a Kurdish cultural center in Paris, elected officials and politicians display their “astonishment”, the left denounces the far right

Three people, a woman and two men, were killed on Friday, a man was seriously injured and two men less seriously, according to a latest report.

According to Agit Polat, spokesperson for the CDKF, the woman is Emine Kara, head of the Kurdish Women’s Movement of France. She had fought and campaigned for thirty years in the four parts of Kurdistan, in Turkey, Iraq, Syria and Iran. According to Berivan Firat, another CDKF spokesperson, Emine Kara had taken part in the fight against the Islamic State (IS) organization, arms in hand, during the reconquest of Rakka by Kurdish forces supported by the international coalition. She had since requested political asylum in France and had been refused refugee status by the French Office for the Protection of Refugees and Stateless Persons (Ofpra), a decision which she had appealed.

The two men are Mir Perwer, a Kurdish singer and political refugee in France, and Abdulrahman Kizil, an old regular at the Ahmet-Kaya Cultural Center.

“These are political assassinations”

Emotion won over the Kurdish community, which spoke of an act “terrorist” and implicated Turkey. Incidents broke out Friday afternoon with the police.

The Paris police chief, Laurent Nunez, received officials from the Kurdish community on Saturday morning. The track of a terrorist attack has been ruled out at this stage of the investigations, arousing the incomprehension and anger of the CDKF. “The fact that our associations are targeted is of a terrorist and political naturesaid Mr. Polat after his meeting with Mr. Nunez. There is no doubt for us that these are political assassinations. »

The suspect wanted “obviously preying on foreigners”Interior Minister Gérald Darmanin said on Friday, adding that“it is not sure that the killer who wanted to assassinate these people (…) did it specifically for the Kurds”. The suspect is unknown to the files of territorial intelligence and the general direction of internal security (DGSI), and Mr. Darmanin also specified that he did not have information which would link the suspect to previous facts linked to the ultraright.

Several hundred people, including the mayor of 10e district, Alexandra Cordebard, were gathered on Saturday at midday, Place de la République in Paris, to pay tribute to the victims of the attack. A demonstration enamelled with violence, eleven people were arrested. In the crowd, many demonstrators waved PKK flags or the effigy of the three Kurdish activists murdered in January 2013 in Paris. Violence broke out between demonstrators and police on the sidelines of the rally. At least four cars were overturned, including at least one set on fire, and trash cans burned on Boulevard du Temple, near Place de la République. The security forces, targeted by projectile jets, responded by firing tear gas canisters.

Kurds killed in Paris: the suspect taken to psychiatry, his police custody lifted for medical reasons