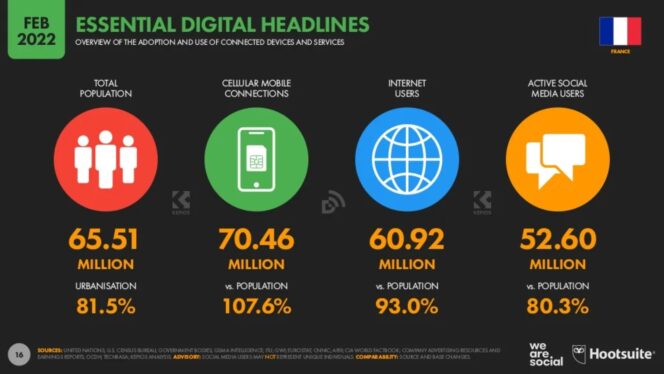 After unveiling their Digital Report 2022 reporting on the statistics of the use of the web and social networks on a global scaleWe Are Social and Hootsuite publish key figures dedicated to France.

According to the report, of the 65.51 million people in France, there are:

The French are more and more interested in connected objects

According to the ranking established by Similarweb, based on the annual traffic of websites in the year 2021, Google (29.3 billion visits), YouTube (9.32 billion) and Facebook (7.34 billion) are the websites the most consulted in France. Google.fr ranks 4th, Amazon 7th, Twitter 8th, Instagram 11th and Netflix 13th. Users spend an average of 11 minutes and 55 seconds on Google compared to 20 minutes and 51 seconds on YouTube.

The 20 most popular queries on Google

“Weather”, “Facebook” and “Google” make up the podium of the most formulated queries on Google. We also find “YouTube” in 4th position, “TV Program” in 5th position and “Translation” in 6th place in the ranking. Note that “Coronavirus”, which came in 3rd position in the ranking last year, is no longer part of it today. However, “Covid” ranks 7th in the ranking and “attestation” comes in 19th position (compared to 11th position in January 2021).

70.5% of French people use the Internet for information

The four main platforms of the Meta company top the ranking of the most used social networks in France. Thus, 73.2% of French Internet users use Facebook, while 59.5% use Messenger. WhatsApp closes the podium (55.7%) and Instagram comes in 4th position in the ranking (54%). YouTube ranks 5th and Snapchat comes 6th ahead of TikTok.

The report reveals the time spent per month on social media applications for French Android users. We thus discover that Internet users spend more than 21 hours per month on the TikTok application. It is the one that has seen the biggest increase: +22% compared to January 2021. In addition, the French spend 1 p.m. on Facebook, 11.9 a.m. on YouTube, 8.5 a.m. on Instagram and 5.4h on WhatsApp.

The potential advertising audience of the main social networks in France

The report gives an overview of the number of users that can be reached by a marketing campaign on the different social networks:

According to the report, French users spend 3 hours and 33 minutes on their smartphones every day. The number of applications downloaded between January and December 2021 is 2.08 billion. As for spending on mobile applications or in-apps, they represent 2.25 billion dollars, and are up 9%.

According to the ranking carried out by App Annie, here are the 10 mobile applications (excluding games) which bring together the most monthly active users in France:

As far as mobile games are concerned, FDJ, Candy Crush and Pokémon Go make up the podium of the most used applications in France.

Based on the App Annie ranking, established for the year 2021, here are the 10 most downloaded applications (excluding games) in France:

The We Are Social / Hootsuite report is very comprehensive. Discover all the information collected as part of this study in the document below: