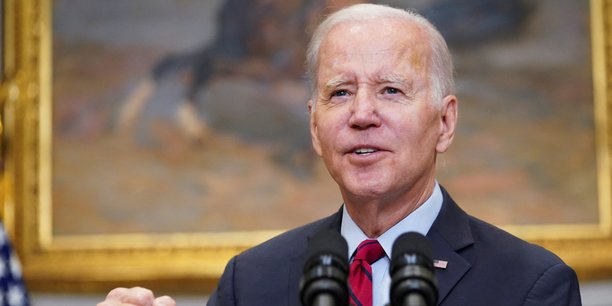 In a column published Wednesday on the site of the wall street journalthe American head of state called on elected officials on both sides to unite to strengthen legislation on the protection of personal data and minor users, as well as to fight against discrimination, “ sexual exploitation ” and the ” cyber harassment “.

The Democratic president said he was “proud” of what the tech sector had accomplished, but also ” worry », « like many Americans », « how this industry collects, shares and exploits our most personal data, empowers extremism (and) puts our children at risk (…) Millions of young people are struggling in the face of bullying, violence, trauma and “mental health” issues, the president insisted. ” We must ask for accounts to social networks on the experiments they conduct on our children, to generate profits “, he added.

On the front line of the social networks pointed out: Tiktok. The Chinese platform is criticized for the addiction it arouses in children and adolescents by elected officials and associations. This social network is the equivalent of “digital fentanyl”, said Republican Congressman Mike Gallagher, one of the leading anti-China voices in Congress, comparing the app to the drug that has caused many overdose deaths in the United States. ” It’s highly addictive and destructive and we see disturbing data on the devastating impact of constant social media use, especially on young American men and women. he told NBC News.

Read alsoSocial networks: do the successes of TikTok and Snapchat spell the beginning of the end for Mark Zuckerberg’s empire?

In the USA, a law prohibits its use on civil servants’ devices, elected officials accusing it of being a tool of espionage and propaganda in the service of China, against a backdrop of tensions between Beijing and Washington. Former President Donald Trump had even tried to ban the social network on American territory, accusing the platform of spying on Americans on behalf of the Chinese government.

But the American Meta, parent company of Facebook is also accused by the American President of being harmful to young people. In the fall of 2021, a former Facebook employee, Frances Haugen, leaked internal documents showing that the leaders of the platform were aware of certain risks for minors. To put out the fire and calm critics, from February Meta will no longer allow groups wishing to advertise to minors on these platforms to have access to data other than their age and location. This new measure should make it possible to ensure that the content of the ads is appropriate and useful, Meta explains Tuesday in a message on its site. The company led by Mark Zuckerberg, which has already stopped allowing advertisers to know the history of teenagers on other sites since the summer of 2021, has also decided to extend this limitation to its own platforms. Is equivalent to “ remove the ability for advertisers to target teens based on their interests and activities “indicated Meta in early January.

Insufficient efforts according to some: on January 6, public school officials in Seattle, in the United States, filed a complaint against several social networks accusing them of “harming” the mental health of minors. ” The increase in suicides, attempted suicides and mental health-related emergency room visits is no coincidence. (…) This crisis was already worsening before the pandemic and research has identified social networks as playing a major role in the emergence of mental health problems in young people “, they write in their complaint.

A new text soon to be examined by the Senate

The noose is also tightening for social networks that are not sufficiently protective of their users at the highest level of American institutions. Joe Biden recalled having encouraged, since the beginning of his mandate, Congress to legislate on the subject. The American president spoke of his government’s efforts to protect personal data, to fight against online discrimination and to strengthen the means of the American State to sanction anti-competitive practices. “ But our current prerogatives have limits “, he explained, calling on elected officials to expand the legal framework to which the technology giants are subject.

Antitrust: does the Biden administration still have the means to match its ambitions?

After decades of immobility, several initiatives in Congress have begun to move the lines. In September, a text on competition was adopted in the House of Representatives in order to strengthen the prerogatives of States to sue technology companies and increase the financial means of regulators. It has not yet been considered in the Senate. A bill aimed at protecting minors on the internet, supported by elected Republicans and Democrats, has also been tabled in the Senate.

Some of the elected Republicans are firmly opposed to a tougher fight against anti-competitive practices, on the grounds that the government does not have to encroach on the functioning of the private sector and that such measures could curb innovation.

ZOOM – In Europe, Tiktok is trying to appease legislators

Shou Zi Chew, the CEO of ByteDance, the parent company of Tiktok, met on Tuesday with the Commissioner for Competition, Margrethe Vestager, as well as his colleagues Vera Jourova, in charge of values ​​and transparency, and Didier Reynders, Commissioner for Justice , in Brussels. A meeting which aims to discuss the expectations of European regulators on the evolution of Tiktok’s practices. In 2022, the 27 adopted Digital services act to stem misinformation and hate speech. This text will force the largest online platforms from mid-2023 to be audited by independent bodies, to assess the risks associated with their use and to adopt measures to mitigate them. Social networks will also have to make great efforts not to be sanctioned in Europe.