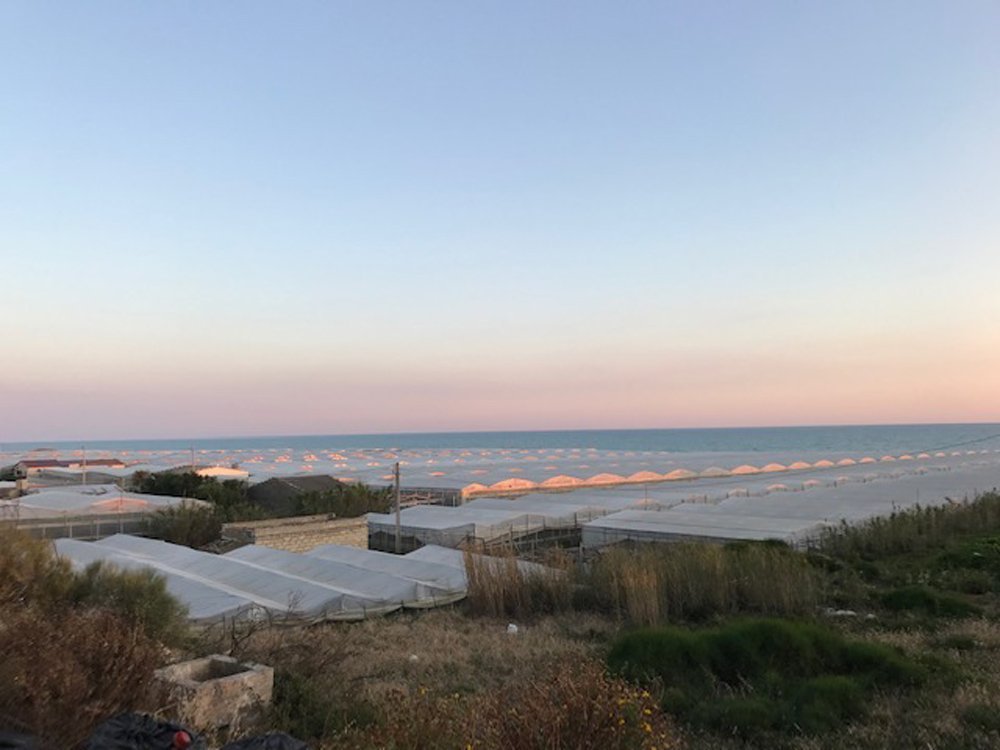 At the wheel of a small red van, a team from the organization Emergency travels the roads of Sicily to offer medical and psychological support to migrants on farms.

It is on the roads of southern Sicily, between Marina di Acate, Vittoria, Punta Braccetto and Santa Croce di Camerina that you can come across the small mobile clinic of Emergency.

“This area is really run down, many of the people who come to our clinic live right next to the greenhouses where they work,” says Ahmed, the clinic’s project manager.

Huge greenhouses cover the coastal area, as do old farm buildings and warehouses where many workers live. “Some of them live just under plastic sheeting, with very limited access to bathrooms and toilets. Sometimes whole families live in these buildings,” says Ahmed.

“There is no heating in winter, and no comfort that one is able to expect from a classic house. The workers here are for the most part excluded from the services offered in Italy. They live, work, sleep and eat in the same place, in the fields. If you live near the greenhouses, you can work longer hours and you do not need to pay for transportation from a nearby town, where there may be more services at your disposal, at your place of work.”

According to Ahmed and the latest information he has, at least 2,000 migrant workers live in such conditions in this part of Sicily. “The working conditions are very difficult.”

The word “Emergency” is written in white on the sides and on the back of the bright red van, parked in a parking lot in Marina di Acate, where a small queue of migrant workers has formed.

The team collects the needs of the patients, others are cared for inside the mobile clinic.

Magda works there as a mediator in the Ragusa region. She explains that the team has the advantage of speaking several languages. “Accessing health services, or even knowing your rights, can be very difficult if you don’t speak Italian,” she recalls.

Wounds in the fields

Most patients have injuries from working in the fields. “It can be small things, but they get worse due to lack of time to treat them and lack of hygiene.”

The mobile clinic was created to prevent workers from paying huge sums to the networks that exploit them to access health care but also social services.

Mediators are there to help some migrants to renew their health card, or to accompany them during their visit to the hospital and provide translations.

“It’s a rural area. In the greenhouses they grow tomatoes, eggplants, zucchini. They need workers all year round, the majority of them are from North Africa, mainly Tunisia and from Morocco, but also from Romania. In recent years, the number of workers from Albania has also increased,” says Ahmed.

Ahmed and the team wear bright red t-shirts with the inscription “I will not report you”, written in several languages, while many patients do not have the necessary papers to be able to live and work in Italy.

“Since we started operating in 2019, we have helped between 800 and 1,000 migrants. About 40% have permits to work here, but the majority do not have papers. They were eventually asked to leave Italy , but if Italy doesn’t have a repatriation agreement with their country, they come here because it’s the perfect place to work with no questions asked. ideal place to be exploited because of your situation, since you are invisible”, laments Ahmed.

To (re)read also: In Palermo, a clinic for victims of torture

In the queue, two young Tunisians wishing to remain anonymous, explain “having come here to work and send money to our families”. They claim to have taken boats to Lampedusa and that “things are not going too badly, we have work to do and that is the most important thing for us.”

One arrived just two weeks ago in Sicily, the other almost a year and a half ago. The latter recounts having spent several months in various reception centers in Italy, having been transferred several times, from Sicily to Calabria, then to the port city of Genoa, in the north of the country, before receiving a notice of ‘expulsion. “It was then that I came back here to work,” says the man, who says he is not afraid of being sent back to Tunisia. “I have a young child in Tunisia, I must continue to work for him”.

Depending on the crowd, the clinic is generally open between 4 p.m. and 9 p.m., to allow migrants to go there at the end of their working day.

The mobile clinic began its rounds in 2019. In May 2022, the team also opened a permanent clinic in Vittoria, in partnership with the public health services of Ragusa, the capital of the province of the same name.

More info about the organization Emergency

Italy: a mobile clinic for migrant workers in Sicily