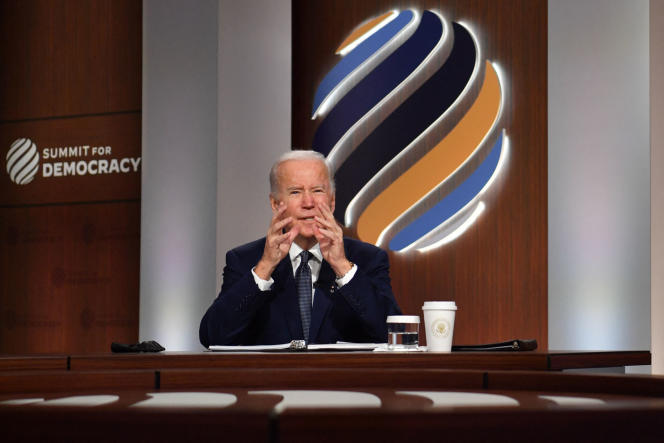 The United States announced, Thursday, April 28, the formation of a coalition aimed at supporting an Internet “open, free, global, interoperable, reliable and secure”. Sixty countries have subscribed to this partnership, including most of the world’s major democracies, with the exception of India, South Africa and Brazil. The deal was formalized in an online ministerial-level meeting led by Jake Sullivan, President Joe Biden’s national security adviser.

The launch of the Alliance for the Future of the Internet was announced in December 2021 and was to take place on the sidelines of the summit for democracy, organized on December 9 and 10 by the American presidency. But many criticisms had led to its postponement. NGOs defending digital freedoms had deemed the initiative hasty, adopted without real consultation and likely to further divide the Internet. The alliance had notably been described as “anti-Chinese club”.

Read also Control of the Internet: the worrying trend of network shutdowns by States

The Biden administration says it has taken the blame to heart. The initiative was renamed “Declaration for the Future of the Internet”, rather than “Alliance”. China and Russia are clearly targeted, but the American administration retains its “vision of a single Internet for the world”, an administration official said before the official announcement of the partnership. “Frankly, we are not here to fragment the Internet, but to save it. »

Far from the ideals of the beginnings of the Internet

In the text published on April 28, the signatories deplore the “rise of digital authoritarianism”, which sees some countries cracking down on free speech, censoring independent news sites, interfering in elections and encouraging disinformation. Cybercrime, sometimes “supported by the States”, affects the security of critical infrastructure. The Internet has moved away from its initial ideals, regrets the text. This is evidenced by the economic concentration of the sector, rather than the promised decentralization, or the storage of users’ personal data for commercial purposes.

On the other hand, the signatories undertake to work to strengthen democratic institutions, to protect the privacy of individuals, to maintain the free flow of information and to ensure citizens’ access to reliable and affordable connections. They say they want to fight online violence without letting the fight against illegal content encroach on freedom of expression. They promise to “refrain from using the Internet or algorithmic tools to carry out unlawful surveillance” citizens or set up “social control mechanisms” or preventive detention.

You have 45.69% of this article left to read. The following is for subscribers only.

Internet: the United States brings together some sixty countries in a coalition against the “rise of digital authoritarianism”