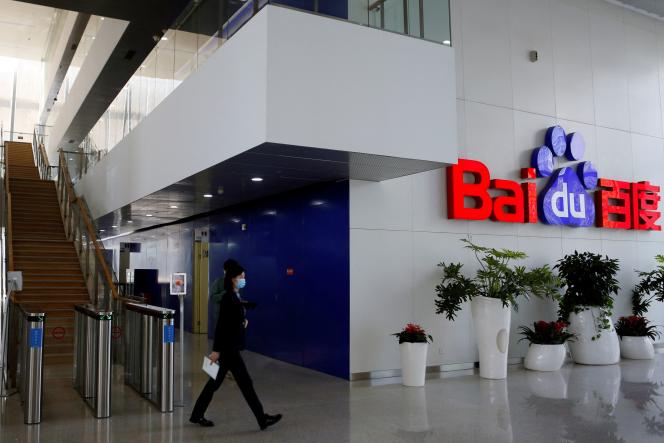 Chronic. Does the little Thumb of Chinese high-tech get his revenge? Alongside the giant Alibaba – which reigns over online commerce –, Tencent, and its messaging and gaming empire, or Xiaomi, the telephone titan, Baidu pales in comparison. Presented as the Chinese Google, it has the attributes but not the results. Announced Tuesday 1er March, its 2021 turnover (18 billion euros) is twelve times smaller than that of Google (225 billion), and its profit is fifty times more modest than that of the American. In other words, without the Californian ban on Chinese soil, it would have been swept away long ago, as were its European counterparts. Moreover, while Google benefited from the health crisis by posting historic results, Baidu suffered from the decline in online advertising and its net income fell by half in 2021.

However, the Hong Kong Stock Exchange enthusiastically welcomed these meager profits, preferring to watch the spectacular transformation of the company. For the past five years, it has undertaken to diversify into artificial intelligence, particularly in the automotive industry, in order to become an essential supplier of solutions for manufacturers, while launching into the production of models. It should announce this week a major agreement to equip vehicles with its systems for BYD, the battery manufacturer that has become one of the world’s leading sellers of electric cars.

It had previously set up a joint venture with Geely, the most dynamic private Chinese manufacturer, and obtained authorization to circulate its autonomous taxis in Beijing. The firm has also recently concluded an agreement with Sanofi for the use of its tools in the field of messenger RNA vaccines. Finally, Baidu is developing in electronic chips, and has developed a platform dedicated to quantum computing. As a result of this offensive, in the fourth quarter of 2021, the company saw its revenues in these new areas explode by 63% to nearly a billion dollars (900 million euros), i.e. already nearly 20% of its turnover. total business.

The Chinese government, which has decided to clip the wings of Alibaba and Tencent in the name of competition and morality, on the contrary applauds Baidu’s efforts, in line with its priority given to artificial intelligence. In this area, Google is also at the forefront and massively uses its new tools for its search engine. But it is still struggling to break into the field of mobility applications, overwhelmed by the Tesla phenomenon and faced with the mistrust of car manufacturers. In Europe, the latter are still looking for the martingale and the ideal ally. It is unlikely to be European.

Internet: Baidu, the revenge of the Chinese Google