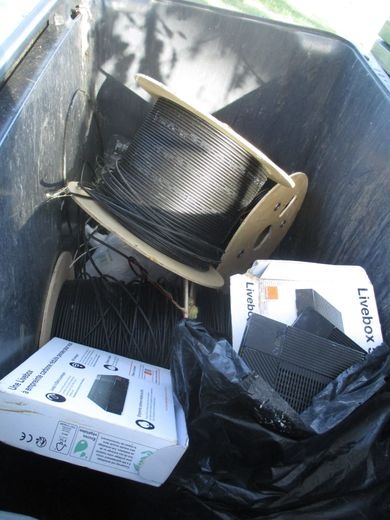 The Lot bins are definitely full… of bad surprises. After the corpse of a wild boar discovered by the sorting agents of Gourdon on December 20, here is a new find which outrages the residents. The story dates back to Monday, November 7. That day Chris Ross, a pensioner of English origin residing in Les Arques, went shopping in Salviac. On the way, as he is used to doing, the Lotois stops at Gindou, a place called La Garrigue to deposit his garbage cans in a container. “That morning, when I opened the gray bin, I discovered five drums of 500-meter fiber optic cables and two new Liveboxes still in their cardboard boxes,” he says. In a bag, several pieces of debris including cable ends and connectors. Chris can’t believe it.

Read also :
Sorting agents discover the body of a wild boar, the union files a complaint against a hunting company

In the afternoon, he returns to the scene and takes a picture of the content to send it to Symictom du pays de Gourdon, the joint association for the collection and treatment of household waste. A neighbor calls out to him, he shows him the trash can: the same reaction of indignation. “It really shocked me; we could see that these cable reels have barely been used, it must cost between 500 and 900 euros, not to mention the Internet boxes with their serial number intact on the packaging, labeled at Orange. It’s a huge amount of new equipment in good condition that should have been used, “he complains.

“We pay for this waste”

According to him, the problem is clear: technicians who installed the fiber left his waste too bulky without asking questions. He continues: “It is we, the Orange subscribers, who pay for this waste and this lost equipment”.

For its part, the mixed union of the country of Gourdon confirms that it has done what is necessary for the town hall to intervene. “The municipalities are mandated to transport bulky items to the recycling center, but this is a real problem because, because of the incivility of the users, they are often called upon and do not always have municipal employees”, explains Myriam Pons, the director of the mixed union. Equipment necessary for the installation of optical fiber that ends up in the trash? A classic, laments the director. “It happens often to us but it’s not even the worst. In December, shortly before Christmas, we had to call in a Lot town hall to rid two freezers filled with food from a forest: they had been abandoned there, surely because that the products were expired”, she regrets.

Orange services condemn this type of practice. ” An internal investigation will be carried out by Orange in order to identify the person(s) responsible. If it is a subcontractor of Orange, financial penalties will be applied, in accordance with the subcontracting contracts in force. Orange ensures that all of its waste is treated and recycled. Thus, for example, we collect 87% of our Liveboxes placed on the market for reuse or recycling. Orange has set up the RE program which allows the recovery, recycling, reconditioning of mobiles but also the repair of mobile terminals in order to extend their lifespan, “explains the company to us.

In the Lot, residents outraged after finding cables and internet boxes in a trash can