Since November 20, and until December 18, 2022, all football fans have their eyes fixed on Qatar, where the 22nd edition of the Football World Cup is taking place. Organized by Fifa, the event mobilizes the media from all over the world.
However, for this edition, even more than in previous ones, the transactions related to the acquisition of match broadcasting rights did not result in agreements for all the channels. Which are the ones on which it is possible to follow the event? What offer can you subscribe to on your Internet Box to access it? We explain to you in detail!

If you don’t want to compromise and miss nothing of the competition, beIN Sports is your best ally. The beIN Media Group television network is the exclusive holder of the broadcasting rights for all the matches of the Qatar 2022 World Cup in France. To chase all 64 matches in the competition on his TV, so all you have to do is subscribe to the beIN Sports channels.

As you surely know, this is a channel package that is not initially included in any basic package, either from Orange, Bouygues Telecom, SFR or Free. Rather, it is available in additional option at €14.99/month with each of these operators.
Once the option has been subscribed, you can access the best of football on the following channels:

It should be noted that the group also offers a formula that can be accessed simultaneously on several devices (Smart TV, PC, smartphone and tablet). It’s about beIN Sport Connect package. It is €15/month, regardless of the operator.

As you will have understood, it is unfortunately not possible to watch the matches of the 2022 World Cup on the sports channels of the Canal+ group. Earlier in November, the group confirmed that its encrypted channels would not be able to broadcast the matches due to lack of rights.
That said, you can always go through the Canal+ Sport package to benefit from beIN Sports channels. The latter are in fact part of this special formula which also includes the Europsort channels, the Canal Multisports channels (Golf+, Rugby+ and Foot+), as well as several other sports channels. 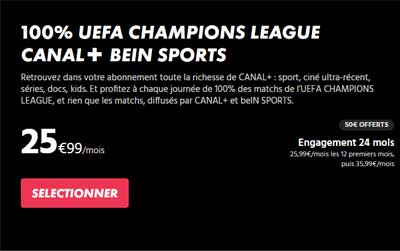 Since the French TV channel n°1 (TF1) is not the official broadcaster of the 2022 edition of the World Cup, it will only broadcast part of the matches of the competition. More specifically, TF1 only has the right to broadcast 28 of the 64 tournament posters, including all those of the France team.
Similarly, as the TMC channel is also part of the TF1 group, you can follow these 28 posters there. To give you more details, TF1 and TMC will broadcast:
16 pool matches;

To watch these matches on TF1, simply tune in to the channel on:

What are the options for watching the World Cup in 4K?

Want to experience the event in optimal quality? No problem !
The 28 posters broadcast by TF1 can be viewed in Ultra HD 4K quality thanks to the TF1 4K channel. Likewise, the beIN Sports 1 channel is once again available in 4K. In concrete terms, all the matches broadcast on the beIN Sports 1 channel, i.e. 56 matches out of 64, will also be broadcast on the beIN Sports 4K channel. This channel can be received on all 4K TV boxes from Orange, Free and SFR suppliers. Unfortunately, it’s a little more complicated for owners of a Bbox, because the beIN Sports 4K channel is not available with the package sold to this operator. To remedy this, simply download the myCanal app to your Bbox. Finally, subscribers who have subscribed to the Canal+ offer integrating beIN Sports can also enjoy the competition in UHD 4K HDR Dolby Vision Dolby Atmos. Indeed, the 4K Event Channel broadcasts the 56 posters mentioned above. To access it, a Canal+ 4K UHD Box and a TV compatible with the myCanal app are required. And if you want to live the experience in HDR Dolby Vision, consider activating the option.

How to watch the World Cup from your Internet BOX?