It is a unique robot in the world that the logistician ID Logistics unveiled on May 18, in the warehouse of its client Panzani in Berre-L’Etang, in the Bouches-du-Rhônes. 3.20 meters long and 11.50 meters high once its mast deployed, ASTRID (Autonomous Stock Taking by ID Logistics) does not go unnoticed.

Its function: to carry out inventories of the stored goods completely independently and to check their conformity with the data of the computer tool for inventory management (Warehouse management system or WMS). ” This task is normally carried out twice a year by the stock managers (GDS)explains Eric Hémar, CEO of ID Logistics. It is a long and tedious task. You have to point each pallet in the thousands of square meters of the warehouse and check that it is in the place indicated in the WMS “.

The inventory is, however, an essential operation to ensure the availability of products and to correct errors in the storage of goods.

In 2018, the logistician imagined, as part of its innovation strategy, a way to automate this process. It chooses to rely on two technologies that are gaining momentum: AMR (Autonomous Mobile Robot) and image processing using artificial intelligence (AI).

Fruit of this reflection, Astrid consists of a mobile robotic platform equipped with high-definition cameras. These are mounted on a deployable mast, ten meters long, in order to reach the pallets of products placed at height. The images are processed using algorithms capable of identifying certain key information to compare it to the data recorded in the WMS. 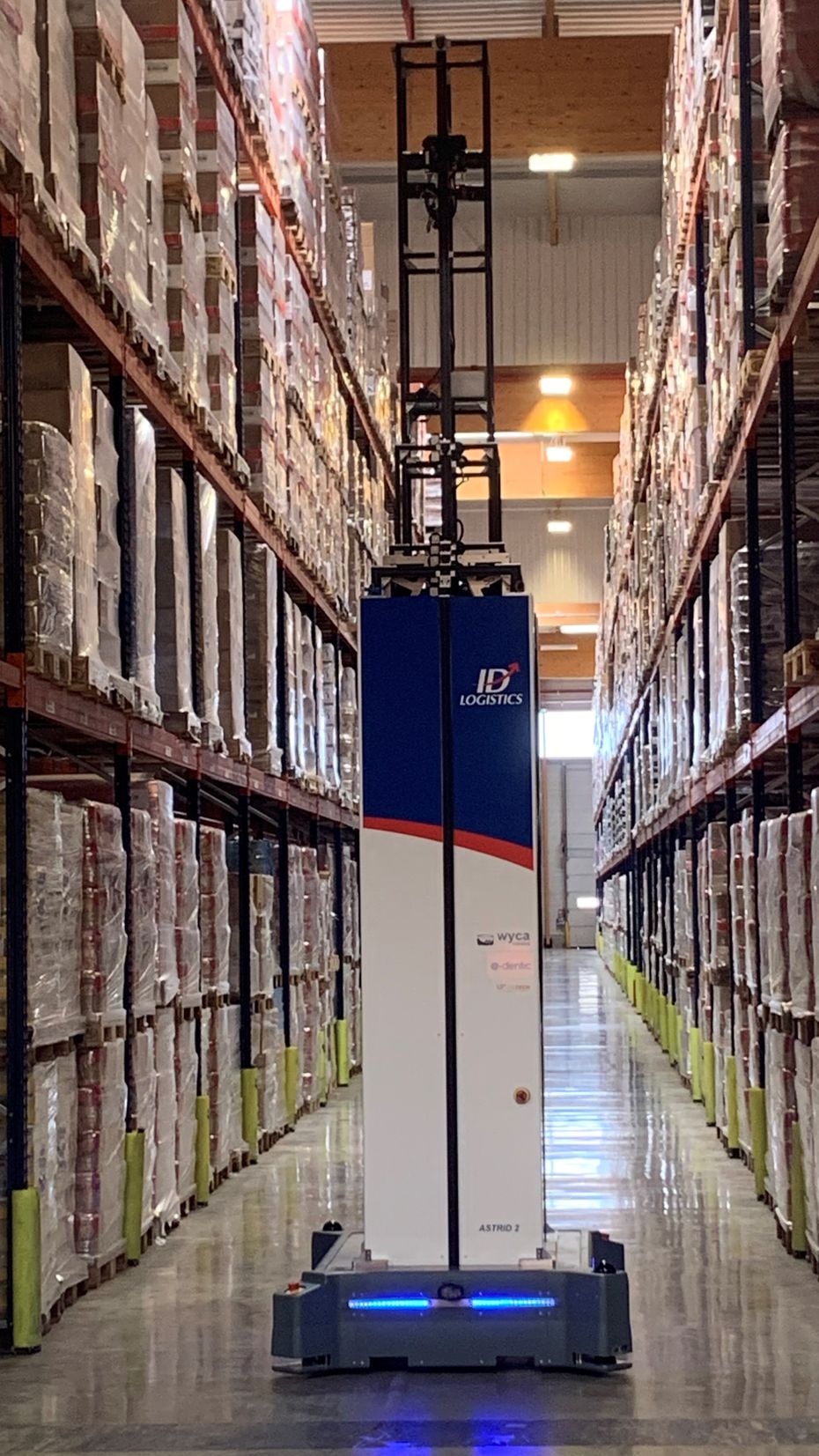 For the robotics part, ID Logistics approached the Toulouse-based company Wyca Robotics, a specialist in AMR. ” We wanted a solution that could be used without supervision, to further automate warehouse inventories, underlines Benoît Boiron, innovation manager at ID Logistics. It also had to be able to coexist with human operators to work during the day.”

The mobile robot from Wyca Robotics does not require any guidance system, not even piloting via wi-fi – yet commonly used by robot fleets in logistics – which Patrick Dehlinger, general manager of the roboticist, compares to “ a virtual track “.

Autonomous navigation in the warehouse

The robot relies on two 3D Lidar systems, placed at each end of the device to map its environment in all directions, in the form of point clouds. A first map is made by guiding the robot manually in the warehouse. ” Half an hour is enough for the robot to have enough information about its surroundings. He will then be able to plan his trajectories says Guillaume Doisy, robotics manager at Wyca.

The inventory manager can also indicate – via a dedicated interface – prohibited zones, danger zones or even zones where the robot must trigger its buzzer. The AMR can then freely move around the warehouse to fulfill the inspection missions assigned to it, without requiring any dedicated infrastructure.

As he moves, his navigation map updates to reflect changes in the environment. ” This is the strength of our system. We trained our SLAM (Simultaneous Localization And Mapping) navigation algorithm to adapt to changing environments. The software identifies the different items in the warehouse and assesses which ones are likely to be mobileexplains Guillaume Doisy. The robot superimposes on the initial plan of the warehouse dynamic layers which it takes into account in its navigation“. Lidars and odometers allow the robot to locate itself in the warehouse with an accuracy of only a few centimeters.

A cohabitation with the operators

In terms of security, the mobile platform is also equipped with four 2D Lidars which are used to detect obstacles that may arise. The robot adapts its speed according to the distance, the direction and the speed of the element – ​​human or not – which may be in its path. Astrid will try to avoid it by automatically recalculating a new trajectory to accomplish her mission.

The choice not to use a wi-fi connection to guide the AMR is an advantage according to Wyca Robotics because it can thus be deployed in very large warehouses, in which the network is often inaccessible. The robot has an autonomy of approximately 15 hours, and is recharged by induction via a base in 2 hours.

The image processing component was developed by E-Dentic. The two high-definition fixed-focus cameras take pictures at each pallet location. The recognition algorithms then identify in less than a second (400 ms) if a pallet is present at the location and can also determine its dimensions as well as read the information related to the bar code affixed to the pallet.

All this data is then compared with that of the WMS. The anomalies are then highlighted in the software so that the operators can check them and correct them if necessary. ” We chose cameras rather than barcode scanners. The high definition image allows us to identify more information that may be useful to the GDS », says Gilles Tessery, CEO of E-Dentic.

This very high level of automation allows Astrid to reach a speed never equaled by other semi-automatic inventory systems, such as overflight using a piloted drone equipped with a barcode scanner. The ID Logistics robot is thus capable of inspecting 5,000 pallets per hour compared to 250 for a drone. According to the partner companies of the project, one night is enough to inspect a large warehouse of 32,000 m2, like that of Panzani, using a single robot.

The deployment of Astrid will take place in 3 stages: first a deployment in France with ID Logistics customers, with 11 robots installed in 2022 and 2023, then a marketing in France – led by E-Dentic – for other logisticians from September 2022, and finally an international opening for ID Logistics subsidiaries in 2023.