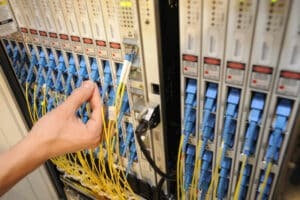 The fiber continues to be deployed everywhere in France, but the deployments do not go at the same rate according to the zones. And during the third quarter, Arcep noticed that fiber connections slowed down sharply in AMII areas and very dense areas.

Arcep has just published its monitoring of the fixed broadband and very high-speed services market for the third quarter of 2022.

At the end of September, there were 33.1 million premises connectable to very high speed and 17.1 million subscribers to a fiber offer from an internet service provider. Figures that continue to grow from quarter to quarter.

But when it comes to the pace of deployments, all is not well. Indeed, the telecoms policeman reports to “strong disparities” between very dense areas, AMII areas and public initiative networks (RIP).

Between June and September, nearly 1.1 million FTTH sockets were installed in France. A lesser increase compared to the second quarter of this year, during which 1.7 million sockets were deployed, but still good. On the other hand, by concentrating zone by zone, the observation is less positive. 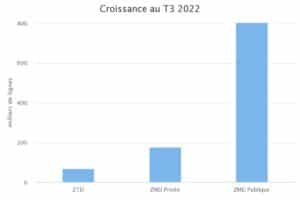 In less dense areas of private initiatives (AMII), only 180,000 homes have been connected to very high speed over the past three months, the slowest rate observed by Arcep since 2015. As a reminder, these are the areas where Orange and SFR have committed to connecting the all residents by building their own FTTH network, and deployments continue to slow down in these municipalities.

The two operators extend their fiber coverage too little in these municipalities, which creates a gap between these areas and the networks of public initiatives, which deploy high-speed fiber. By way of comparison in the RIPs, 770,000 households were made connectable to very high speed during the last quarter, ie 4 times more than in the AMII zone.

The observation is the same in very dense areas (ZTD) where deployments are also at an insufficient rate. The telecom regulator also adds that “the production of new lines has even dropped by almost half compared to the same period last year”.

AMII commitment: SFR ahead of Orange

Arcep takes this opportunity to take stock of the situation of deployments and commitments of Orange and SFR in the AMII zone. This is the area where Orange and SFR have undertaken to bring fiber to the inhabitants of several thousand French municipalities by building their own FTTH network. SFR had committed to connecting 92% of premises by the end of 2020 and Orange 100% of premises by 2022.

As of September 30, 2022, Orange has provided fiber to approximately 87% of the premises it must connect and SFR to approximately 95% of the inhabitants concerned. The operator in the red square is therefore far ahead of its competitor, but the two operators still have to complete their connections by the end of the year.

Despite these significant differences in deployment rates, fiber continues to attract more and more consumers across France.

At the end of September 2022, there were 17.1 million subscribers to a FTTH offer at Orange, SFR, Bouygues Telecom, Free and alternative operators, i.e. 850,000 new subscriptions between the second and third quarters. This represents 83% of very high speed subscriptions and 54% of internet subscriptions, all technologies combined, in France. An increase of 11 points in one year. 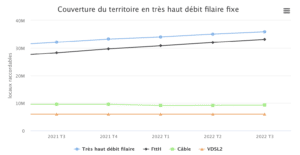 Fiber: Arcep observes strong disparities in FTTH deployments in the third quarter of 2022