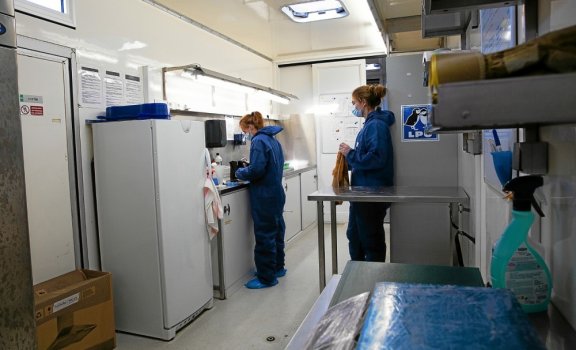 
Avian flu is a seasonal epidemic that comes back every fall and winter. “Except that in 2022, for the first time, it did not stop at the beautiful season. We are in the presence of a highly pathogenic strain that affects seabirds enormously. The epidemic is unprecedented. It is because of its duration, since it has been going on since last winter. And by the species it affects: never before have gannets been affected. And the gulls have never been so much,” says Romain Morinière, director of the LPO (League for the Protection of Birds) station in Pleumeur-Bodou.

A stone’s throw away, in the Sept-Îles reserve, lives the only colony of northern gannets in France, decimated. “We have figures today but they are partial, specifies Pascal Provost, curator of the Sept-Îles reserve. Evaluation is still ongoing in terms of mortality, virology and serology, as well as the behavior of the birds that survived. We will have the results in January.

Since July 13, we no longer support gannets, gulls and seagulls in distress, too often carriers of the virus against which there is no cure.

At the LPO station, its teams, made up of 1.8 full-time equivalent (FTE) employees and four people who are volunteers or in civic service (still in FTE), have learned to be extra vigilant to avoid bringing the virus into the care center. Passage to the footbath, protective clothing, hygiene… The processes are well established.

Since July 13, the teams have had to resign themselves to no longer taking care of the gannets, gulls and seagulls in distress, too often carriers of the virus against which there is no cure.

To be able to accommodate the oiled birds, which can flock in the winter season, the Pleumeuroise station has thus brought in a mobile care unit from Rochefort. It has been in service since October 5. “This allows us to accommodate, among others, alcids such as common guillemots, twisted penguins or Atlantic puffins. We place them in quarantine for five days, to be sure that they do not have the virus and, then, we return them to the care center to wash them if they are oiled, ”explains Romain Morinière.

We cannot leave gulls and madmen to die as we have done, for lack of means. Structures must be put in place, on a larger scale, to find a solution.

A way to continue to treat, with the means at hand, while waiting for the implementation of more important means, announced by the public authorities. “A circular from the Ministry of Agriculture announced the deployment of dedicated departmental quarantine centers. We are waiting for their implementation, ”says Romain Morinière.

“If an episode like this summer happens again, we have to be able to act. We cannot leave gulls or madmen to die as we have done, for lack of means. It is necessary to set up structures, on a larger scale, to have a solution”, proclaims the director of the LPO trégorroise.

He advises: “These birds are protected species, already subject to other difficulties such as the reduction of the resource and the ingestion of plastics. The increase in their mortality is not good news, it is very worrying”.

Faced with avian flu, the LPO of Pleumeur-Bodou mobilizes a mobile care unit