The 1,200 hp Lucid Air Sapphire thanks to its three electric motors impresses and rubs shoulders with already seasoned sports cars such as the new 1,020 hp Tesla Model S Plaid and the formidable 1,500 hp Bugatti Chiron thermal.

With the advent of electric, cars over 1000 hp have not become commonplace, but almost!

Tesla Model S Poster, Lucid Air Sapphire, Lotus Evija, Pinifarina Battista, Rimac Nevera… All these models exceed 1,000 hp, some even flirt with 2,000 hpthey are all electric and they all offer much higher performance than some thermal supercars.

Today, the American media Hagerty offers us an impressive and very interesting video. The new Lucid Air Sapphire, which was presented a few months agohas three electric motors for a cumulative power of 1,200 hp.

Impressive for a sedan that is above all family and practical. She opposes the Tesla Model S Poster, a 1,020 hp sedan in the same segment, also with three electric motors. The American sedan has also beaten theNürburgring record for a production electric carjust before to be overtaken again by the Porsche Taycan.

On the thermal side, it’s simple, it’s quite simply the most powerful production model there is: a Bugatti Chiron Pur Sport with 1,500 hp thanks to an 8.0-litre quad-turbo W16. A motorcycle, a 215 hp Ducati Panigale V4 SP2 comes to rub shoulders with these beautiful babies, “for form” shall we say.

The Lucid Air Sapphire on display

The three cars were tested over a quarter of a mile, that is to say over a 0 to 400 meter standing start. These are the two electric cars that leave the fastest. The Lucid Air Sapphire quickly takes the lead, followed closely by the Tesla Model S Plaid. 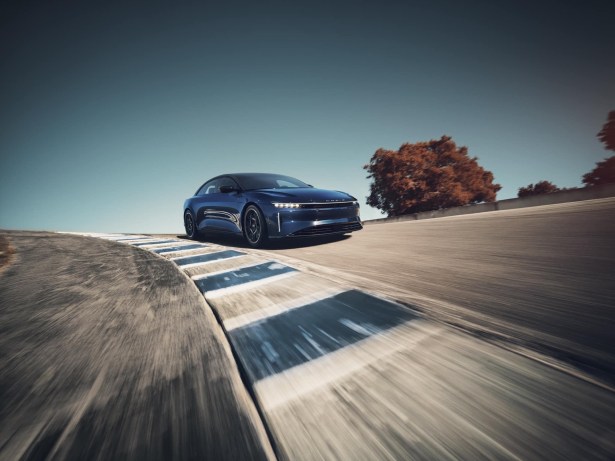 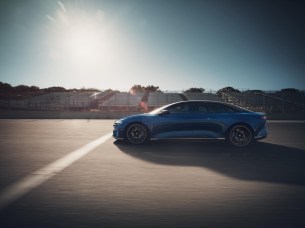 At the end of the run, the Lucid reaches a maximum speed of 251 km/hwhile the Tesla finishes the race at 244.6 km/h. As you can see on the video, the Tesla is caught up at the end by the Bugatti Chiron thanks to the extension of its combustion engine.

In the end, the Lucid manages to cross the finish line by 9.1 secondswhich is two tenths less than the Tesla and the Bugatti, which both finished in 9.3 seconds. And facing the motorcycle? The Lucid Air Sapphire wins again, but with a shorter head.

The Lucid Air Sapphire will go into limited production next year and will start at a price of $249,000which is almost twice as much as a Model S Plaid in the USA ($127,590), but it’s still about ten times cheaper than a Bugatti Chiron which is exchanged for 2.4 million euros in base price.

Bugatti has designed the very first electric scooter in its history alongside Bytech International. The trend of car manufacturers entering this market is only being confirmed.
Read more

Electric cars are more powerful than thermal cars, here is the proof