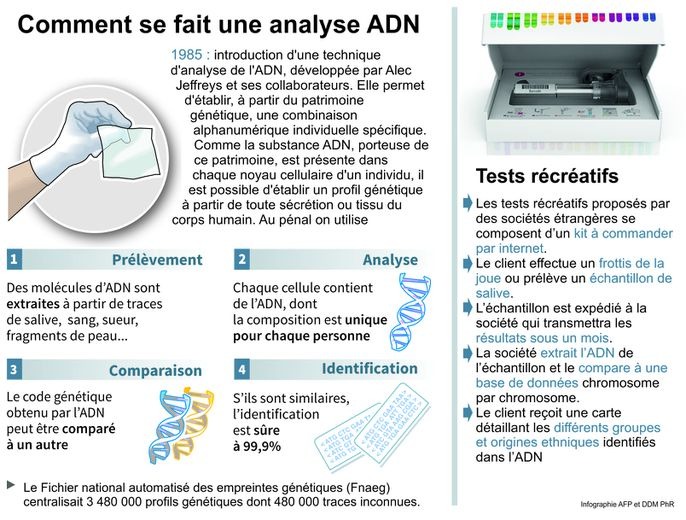 the essential
Formerly reserved for scientists, the medical world, specialists in the police or the technical and scientific gendarmerie or the courts, DNA tests are now accessible to everyone, in particular to research their ethnic origins thanks to kits sold on the internet by foreign companies. Because private tests remain prohibited in France.

Until now they were reserved for scientists, the medical world, specialists in the police or the technical and scientific gendarmerie in criminal investigations or in the justice system when it authorizes research into paternity. But DNA tests have now gone from the exception to the trivialization since everyone can obtain a sampling kit on the internet from foreign companies which take care of carrying out tests in a few weeks.

A host of companies

Whether they are called MyHeritage, EasyDNA, Igenea, FamilyTreeDNA which can deliver the results in France or Ancestry, the well-known 23andme or LivingDNA, all these companies offer to carry out different types of DNA tests. Autosomal DNA test which allows to discover one’s ethnicity, mitochondrial DNA (mDNA) test which allows to identify one’s matrilineal (maternal) lineage or to find distant relatives, Y-DNA tests which will work on the paternal lineage. Some of these companies have specialized in specific areas such as researching their ancestors for their family tree, DNA comparison to establish family ties or more specific services (finding their British ancestors) or more unusual (DNA test for dogs).

Some implement additional tools such as contacting a person with whom a client obtains correspondence by messaging, for example in a search for paternity or fraternity, downloading their DNA data, creating their family tree directly with software, obtaining a report of health when the purpose of the test is to detect the risk of developing cancer or another disease. All these services just a click away cost from 49 to 200 euros depending on the laboratory, the type of test chosen and the additional services. All these companies insist on simplicity or even the playful side (you create your account like on a social network)… but also on confidentiality and security.

Because it is there that the shoe pinches with questions which are not all raised.

The DNA analyzed by these companies feeds, in fact, huge databases (some 6 million entries for MyHeritage, 18 million at Ancestry), gold mines which can arouse the greed of third-party companies, particularly pharmaceutical companies. . GlaxoSmithKline Laboratories, for example, invested $300 million in 23andme. But these data may also be of interest to the authorities: Family Tree DNA has thus admitted having shared the genetic data of its clients with the FBI in the context of criminal investigations.

“DNA data represent inestimable value for certain companies, the risk of theft of genetic data is always present, and makes possible increased traceability of individuals” recalls the HAAS lawyer firm, which notes that “this new mode of marketing DNA tests show that this practice has gradually withdrawn from state control to fall into the private domain” which carries out “genetic sequencing but without any supervision and without official authorization. Between Europe and the United States, the vision of genetic data is not the same, as the European Consumer Center (EEC-Net) reminds us. “By requesting the analysis of your DNA, you transmit to the laboratory sensitive information protected by law because it allows the identification of a natural person.

In Europe, the General Data Protection Regulation, the famous GDPR which entered into force in May 2018, expressly introduced biometric and genetic data as two new categories of protected personal data. The GDPR protects you and imposes itself on laboratories, even based in third countries, which offer DNA tests to European consumers”, explains the center which advises, “to avoid the risks of commercialization or piracy of the genetic database. » to request the erasure of their data from the laboratory as soon as the results are received.

Other risks pointed out by recreational DNA tests, their misinterpretation, particularly when it comes to health DNA tests. “Given the constant evolution of medical and genetic research, the applicant’s personal factors not taken into account at the time of the test (lifestyle and lifestyle, family history, environment, etc.), the same results could very well be interpreted differently in a few years”, estimates the European Consumer Center, which warns against a final risk: the psychological consequences of DNA tests.

“Faced with the results of a genetic test which would reveal a family secret, a non-paternity or a parentage link, the psychological consequences can be serious. »

DNA tests on the internet: a success that is not without risks