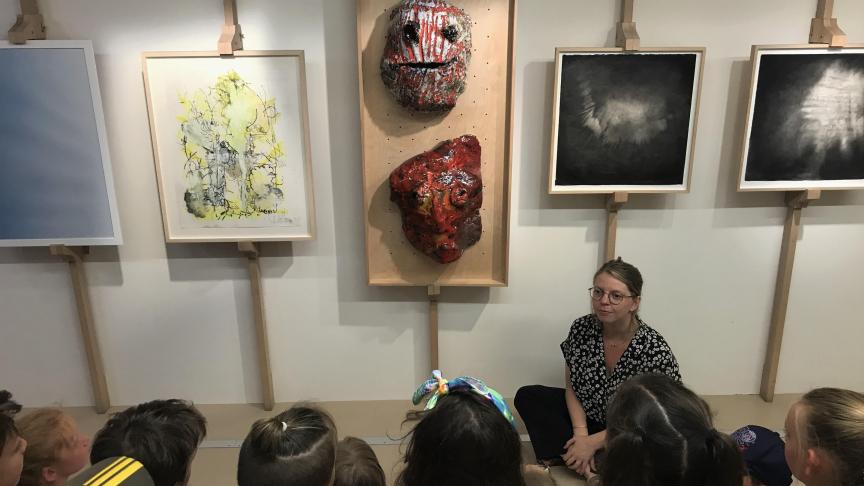 
Chloé, cultural mediator: “Hello, my name is Chloé, I’m going to introduce you to MuMo. Why do you think it’s called that? »

Children : “There’s a museum inside, it’s almost the same! And mo is like animals. Or as a mobile. »


Chloe: “Yes, it’s mobile: the museum comes to you. In Salomé, for example, do you have a museum? »

Chloe: “Have you ever been to the museum? »

Children : ” Yes yes ! We see a lot of things from before. For example, we see dinosaurs. You can also see tables. And there is the Mona Lisa. »

Chloe: ” That’s it. Here is a contemporary art museum. Do you know what this is ? »

Chloe: “So no, contemporary, it’s today’s era. These are works that speak of our world and the artists can be the age of your parents or your grandparents. You can enter the truck and look at all the works, the ones you like or not. Then stand in front of the one you find the weirdest (children choose two red masks). What do you see ? »


Children : “There’s a lot of red so if it’s a human’s head, it’s not okay. Looks like a monster with a deformed head. Red can also be fire or lava. Maybe it’s a dragon! Or maybe someone mixed up monsters and items. »

Chloe: “That’s the interest of contemporary art: it can be everything. Because it is the imagination of the artist. Her name is Sylvie and she made these clay masks, it’s like clay. Then she put enamel, which is used for ceramics: it is baked in special ovens at 1,300 degrees. »

Chloe: “Here is another work that surprises you, what do you see? »

Children : “The sea and meteorites. In a cave, there is a hole and lots of spikes. It’s a storm in a forest. It’s a mouth with lots of teeth. We took a grayscale photo from a very, very long time ago that would be in the forest. »

Chloe: “The artist here was inspired by a butterfly wing. It’s graphite on Japanese paper. I am taking you now as if to a small cinema to see a small film. What do you see ? »

Children : “It’s the sun they retracted to make the moon. It’s incredible ! »

Chloe: “It’s an eclipse. You know what it is ? It is the Moon which passes in front of the Sun and hides it for a few minutes. But there, at sunset. It’s very rare in real life, so the artist recreated these images by computer. And you, what would be your best bedtime?

Children : “It would be a sunset with a rainbow. And also a dolphin. »

Children : “We liked it especially because there is no advertising (…). We have seen that there are artists who challenge themselves in their heads. And there were odd things like a snail making the sign of infinity, a camel and a swan friends or lovers, things that were too beautiful. Or too well done. Or ultra-pretty. »

The MuMo is a huge truck that houses an exhibition of contemporary art. The idea of ​​MuMo is to meet children, especially those who have no access to culture. A survey was conducted following the MuMo’s visit to France between 2011 and 2013. After 2 years of touring, it offered 56% of the children welcomed their first visit to a museum.

Launched in 2011, the MuMo today travels the roads of the Lille metropolis as part of Utopia
: it’s the Mumotopia exhibition. There are around thirty works of all types: photographs, installation, painting, sculpture, video… After a visit, the children attend a plastic art workshop. As part of Utopia, the MuMo is also open to the general public, for free visit (as if it were a small museum).

Tuesday, August 16, he will be at Capinghem (details to come on https://musee-mobile.fr/).

For two months, their unfinished swimming pool has formed a large hole in their garden in Fournes-en-Weppes

Continue reading on this topic(s):

One of the ways to reduce the carbon footprint is of course to plant trees. Also I suggest that…Read more

Children in front of the contemporary art of the MuMo: “It’s weird and too well done”