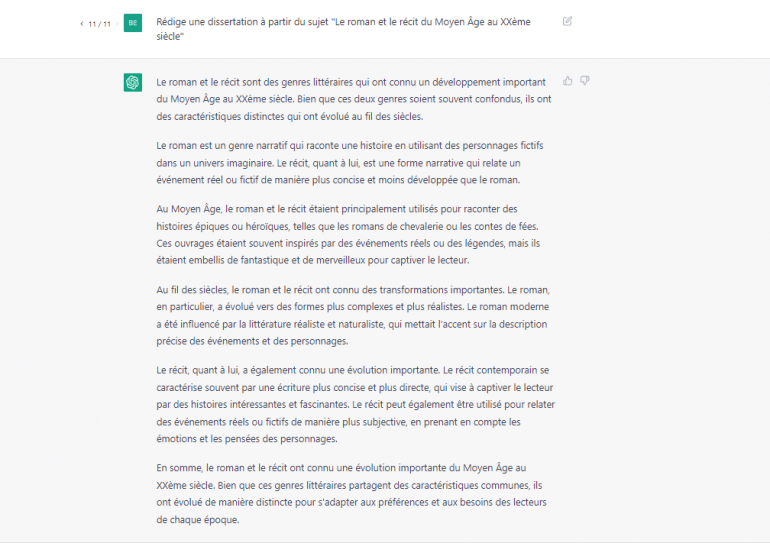 It is the best algorithm of the moment when it comes to simulating human conversation. The chatbot ChatGPT never ceases to impress the internet. Designed by the American startup OpenAI, which emerged from the association founded in 2015 in the United States with the aim of promoting and developing artificial intelligence with a human face, this conversational robot marks a new stage in the progress of automatic language processing algorithms. natural. Launched last week by the OpenAI association, the tool, still in the test phase, accumulated Tuesday, December 6 more than a million users who have already tested the consistency and complexity of its answers.

The latest project from the OpenAI company, to which we already owe the DALL-E model, capable of generating original images from simple text, ChatGPT is a conversational robot capable of understanding questions and answering them in natural language with unprecedented quality and in multiple languages, including French. This program relies for this on an artificial intelligence, GPT3, which uses automatic learning algorithms fed with millions of texts and conversations available on the Internet (press articles, academics, blogs, scripts of films, TV shows , etc.) to understand the meaning of words and phrases and generate relevant responses based on context.

What can ChatGPT do?

ChatGPT covers every topic imaginable. After having created an account on the OpenAI website, you can ask him to provide you with a cooking recipe, write an essay, write a cover letter for a specific company and activity, write a song on a particular theme or invent a story to tell the children in the evening. ChatGPT can also respond to particularly complex requests, to debug computer code, solve a mathematical problem or write an article on the subject of your choice. No matter the query, within the limits of legality, ChatGPT will provide you with advanced answers in just seconds. And he continues to learn from the test of Internet users.

The ChatGPT chatbot easily offers an essay answering the last subject of the French baccalaureate:

A dissertation responding to the last subject of the French baccalaureate

A cooking recipe from leftover food in the fridge:

A cooking recipe using food from the fridge

An article presenting ChatGPT and the questions raised by advances in intelligence for human activity:

We asked the chatbot ChatGPT to write an article about it

Provoking humanity to question the progress of artificial intelligence

Still in the experimental stage, ChatGPT already raises a number of questions about its current and future capabilities. Some already see it a future competitor to Google, capable of formulating more complex and contextualized responses to Internet users’ queries. Others wonder about the threat it poses to human activities based on the creation of content, for example, such as press officers or journalists. It could also be used for plagiarism purposes by students for school assignments. Even diverted to trap humans by spreading false information or creating credible scams.

The tool still has, however, some room for improvement. “It is important to stress that ChatGPT is not yet able to fully replace humans in content creation. It cannot yet understand the intent behind a text and still needs to be trained on vast amounts of data to improve”, answers the bot when asked the question. ChatGPT is also unable to gather first-hand information, conduct interviews or use nuance and critical thinking to justify its choices.. In its initial version, at least.

“Future developments in artificial intelligence may be able to bring ChatGPT to be more human in its ability to create content,” says the OpenAI-designed chatbot. “This raises ethical questions about the use of AI in content creation fields and how this might affect human workers. It is important to continue to monitor these developments and consider the implications for the coming”.

In addition to the OpenAI association, American companies have also designed particularly advanced experimental conversational robots. Character.ai, a company founded by former Google engineers, released a chatbot in October that can take on any persona with attributes and behaviors considered authentic by humans. Meta researchers recently developed a computer program called Cicerolike the Roman statesman Cicero, who has proven himself at Diplomacy, a board game that requires negotiating skills.

News by RTL editorial staff in your mailbox.

ChatGPT, the chatbot that impresses the Internet and questions about the progress of AI


Explore our social media accounts as well as other related pageshttps://yaroos.com/related-pages/