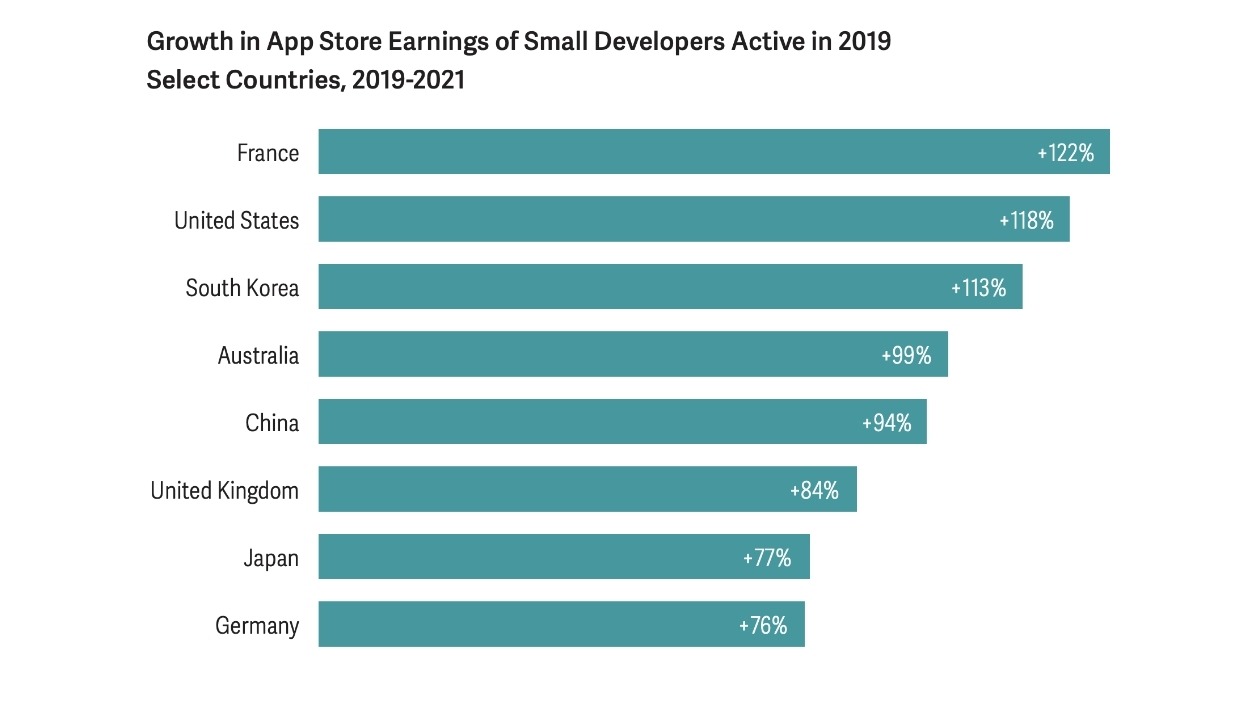 While the turmoil seems to inevitably approach its App Store, on both sides of the Atlantic, Apple is producing for the third time, after the versions of 2021 and 2020, an impact study conducted, at its request, by the firm Analysis Group. Title Spotlight on Small Business & App Creators on the App Storeit is supplemented this year by another study, conducted by the Progressive Policy Institutea research firm and think tank which is headquartered in Washington. This second study focuses more on the employment impact of the App Store economy.

The impact in the real economy

As for the two previous editions, the figures presented obviously lead to amazement, and show to what extent an ecosystem has been formed around the App Store.

Thus, in Europe, 2.2 million jobs – an increase of 7% compared to last year – would be based on the economy of the App Store. For France, no less than 300,000 jobs should be counted. Positions distributed in a wide variety of fields, since it can also be engineers, designers, or even salespeople. The delivery men, who haunt the streets of the cities with backpacks on their shoulders, are a priori not counted in this sum.

This growth in the number of jobs affected obviously corresponds to the fact that over the past two years, more users than ever have used applications to buy digital or material goods. Because consumption has become highly digitized under the effect of the pandemic.

According to Analysis Group, it is mainly small developers who have benefited, and they represent no less than 90% of the accounts of creators of applications on the App Store.

Note that the research firm retains a definition of small entities slightly different from that of Apple for its Small Business Program, launched at the end of 2020. Thus, to fall into this category, one must earn less than a million dollars per year, or generate less than a million downloads (and more than a thousand) per year.

Globally, since 2019, i.e. over the past two full years, their revenues have increased by 113%. In France, which holds the planetary record for recorded income growth, we have even reached a 122% increase since 2019.

In these cases, everything obviously always depends on the starting point, but this two or three-digit growth is nevertheless twice as important for the small players as for the larger, more established ones. Logic.

Are these figures the only fruit of the pandemic? It would seem that if the effects of lockdowns, for example, have a part to play, this growth trend is here to stay. It is a lasting, not to say definitive, shift that seems to be working.

Either way, Apple is making sure it does, including continuing efforts like theApp Store Foundation Programlaunched in 2018, and which supports developers in the creation of their application in order to improve it, or adapt it to certain markets before launching there.

But there also seem to be mechanical effects to this growth. The ubiquity of App Stores allows developers to reach a very large audience. For small players, 40% of downloads for their applications come from App Stores other than that of their country of origin.

The App Store retains a strong power of attraction

With a booming market, it’s no wonder recruiting new developers isn’t a problem. The study thus indicates that thousands of new small structures and new application creators have joined the App Store in 2021.

24% came from Europe, 23% from China, 14% from the United States and 4.3% from Japan – the major economic regions on which Apple communicates its financial results… while 34% were registered on the App Store from South Korea, India, or Brazil, in short, the rest of the world. In Europe, the number of new “small” developers has grown strongly, especially in the United Kingdom, which has increased by 40% since 2019, and 25% in Germany.

But the Analysis Group study also seems to show that small developers are not doomed to remain so. Thus, 45% of App Store players, who now earn more than a million dollars (and are therefore no longer part of the Small Business Program) were either not present on the App Store five years ago, or earned less than $10,000 a year there. Apple’s download kiosk environment therefore seems like a haven where growing and expanding is not only possible, but facilitated.

Sideloading, a grain of sand? No, a sandstorm

The demonstration is clear – and it is difficult to question it as a whole. Yes, the App Store has fundamentally changed the economy, just as smartphones have changed our lives. Yes, it has beneficial effects, and provides a framework in which Apple invests to give developers a chance. So many points that are not really called into question by critics of the closed model of the App Store, moreover.

This is why, and even if we understand that it is not in Apple’s immediate interest to communicate on this point, we would have liked to have some leads on the potential effects of the sideloading on this economy. But this point is not addressed by the study.

However, the opening of Apple’s ecosystem to other download kiosks seems inevitable. The question can therefore legitimately be asked to what extent and in what proportion it will bring balance or chaos, new possibilities and problems. It seems that it is still too early to know. But the challenge is there, very close, which could well shake this fine, well-oiled machinery, for better… or for worse, at least from Apple’s point of view.

Apple celebrates, once again, the success of its App Store, with a study and an avalanche of figures


Explore our social media accounts and also other pages related to themhttps://yaroos.com/related-pages/