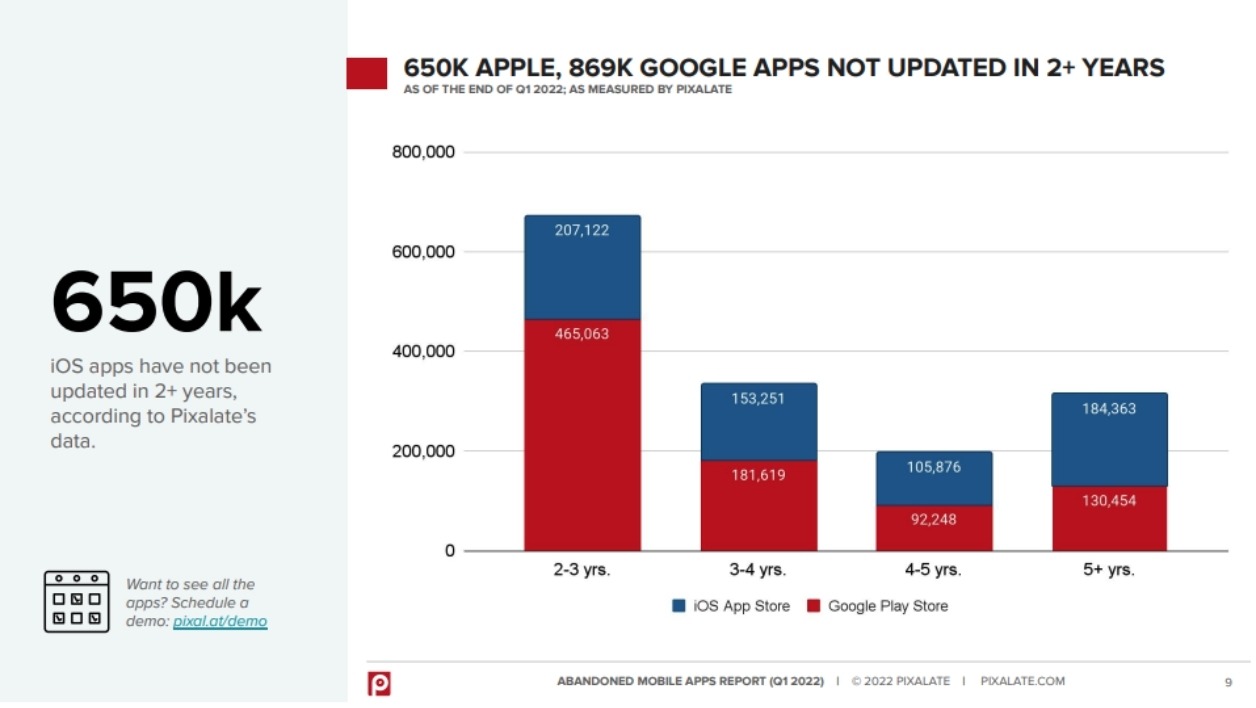 Far from the issue of sideloading, which arises mainly for the Apple App Store, the success of mobile download kiosks is undoubtedly their first enemy. How do you find quality apps in an endless stream of new apps? And moreover, how to ensure that the ranks of these very rich offers are not artificially inflated by obsolete, abandoned apps. A real problem that Apple and Google are well aware of, since the two companies have embarked on major spring cleanings lately.

Nevertheless, the mobile research company Pixalate has just published a report that makes you dizzy, as the phenomenon of abandoned apps seems important. Thus, despite the efforts undertaken by Google and Apple, the kiosks of these players would have no less than 1.5 million abandoned applications at the end of the first quarter of 2022. That is approximately 30% of the total applications, since we counted, at the end of 2021, 3.6 million applications on the Play Store, and 1.8 million on the App Store, so around 5.4 million in total, according to figures from Data.ai, formerly App Annie.

But what is an abandoned application? It’s for Pixalate, a program that hasn’t been updated for at least two years. According to its report, 650,000 applications have not been updated in two years on the App Store, against 869,000 on the Play Store side. Android developers therefore seem to follow their apps less in the short term.

But, it is interesting to take a look further, over a longer period of time. Pixalate has thus established a category of apps “super abandoned”which have not had updates for over five years.

There are 184,363 at Apple and 130,454 at Google, for a total of around 314,000. The App Store wins the prize for the kiosk of downloads where abandoned applications are the most numerous in the long run. Thus, 58% of these apps not updated in five years and more are on the Apple service.

Categories more affected than others

It is interesting to note that the categories that suffer the most from these abandonments are games and educational programs, as well as reference apps, where we find both dictionaries and apps like Google Translate or digital versions of the Bible. or the Koran – which therefore do not necessarily need regular updates of their content.
On the other hand, apps relating to finance, health or shopping are the least abandoned. Perhaps because they are also the most profitable and vital for maintaining the activity of the players who offer them.

Dropouts even among popular apps…

Also according to Pixalate’s report, just under 500,000 apps have not been updated in four plus years. However, it is worth taking a closer look. Thus, 84% of apps with 100 million or more downloads were updated within six months or more. While 6% of this successful app slice falls under the category of abandoned apps. It’s still impressive! In the same spirit, it is surprising to note that these abandoned applications represent 16% of the applications which count between one and ten million downloads.

The issue of security, privacy, and the need to act

Obviously, these abandoned applications pose a compatibility problem with APIs that have evolved over time, or that have been updated for security reasons. Similarly, for both players, the rules of confidentiality and respect for private life have been strongly reinforced in recent years.
This is why Apple and Google have launched a kind of hunt against these applications whose maintenance is no longer assured.

Thus, at the end of last April, Apple announced that it had removed 2.8 million applications since 2016 for these reasons. The giant recalled that apps that have not been updated in the last three years and that do not reach a certain download threshold could be removed from the App Store without any reaction from their developers. That could be around 450,000 apps, according to Pixalate figures.

Google, for its part, is a little stricter since it sets a threshold of two years without an update before launching a procedure to delete the app. By applying these criteria, it would be around 800,000 applications that should potentially bow out.

The two giants therefore have a colossal construction site ahead of them. But, for them who highlight the security of their solution in the face of current or potential competition, it is obvious that this work cannot be postponed.