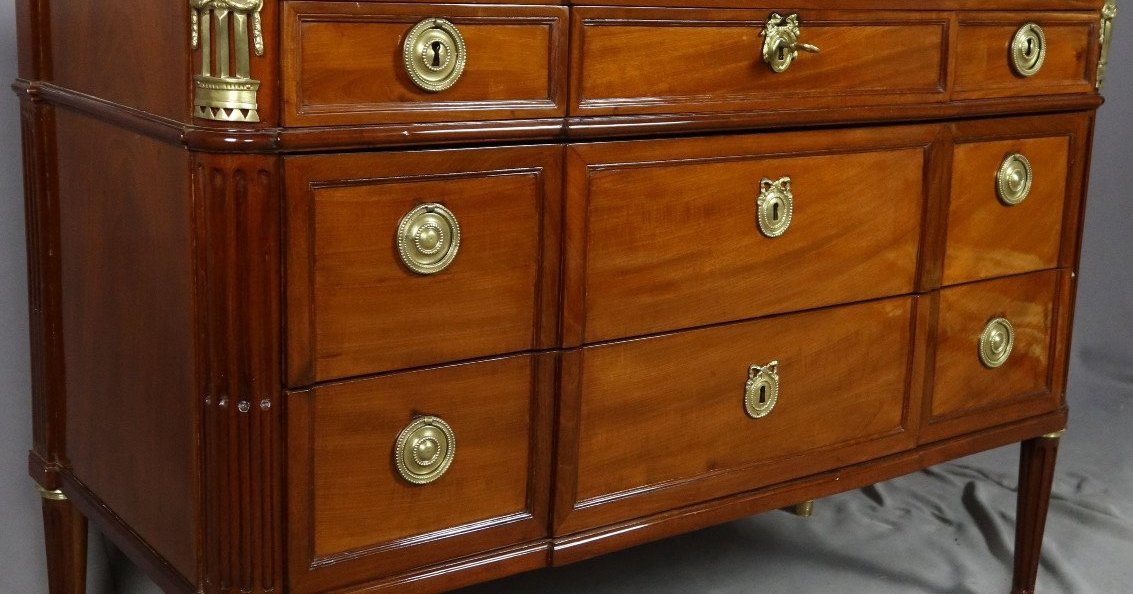 1/16/23 – Heritage – Grignon Castle – Among the collateral damage of the sale of furniture from the Château de Grignon (see the article), in terms of history and the history of the decorative arts, we can also regret the loss of the history of this furniture . We are here faced with a phenomenon not far removed from the consequences of uncontrolled archaeological excavations which, if they sometimes make it possible to find objects of interest in terms of art, lead to the definitive ignorance of the context in which they were produced.

Photograph of the site where the furniture is offered for sale

Thus, thanks to an attentive reader of The Art Tribunewho warned us while preferring to remain anonymous, we were able to find for sale on an online antiques site (he. 1), one of the chests of drawers that we had reproduced in our investigation. This one, theillustration 19 of the article and the batch 207 of the sale, had been presented as ” of style “. We indicated (thanks to Julien Lacaze) that it was a ” Louis XVI chest of drawers of very good quality which it is not excluded that it could be stamped “. There is little doubt that it is the same piece of furniture.
We can see, in fact, despite the appalling quality of the photograph published on the Domaines website, that it bears the same arcuate veins in the middle drawer, and the same knot in the top right drawer (we surrounded by a blue frame – he. 3 to 4). The domains website also stated: white marble top with chamfered edge and central projection as seen in Figure 1.

2. Chest of drawers sold by the Estates from the Château de Grignon.
We have circled the two details that can be clearly seen on the chest of drawers in illustration 1.

4. Detail of the chest of drawers on the site where it is offered for sale: we see the knot in the wood in the same place as in illustration 2

From the Louis XVI period (and not of style “), it was and very well made, it was also. As for the stamp, it is that of the cabinetmaker Nicolas Petit (he. 5), whose furniture is preserved for example at the Carnavalet Museum or the Calouste-Gulbenkian Museum (on Nicolas Petit, see this article).

Estimated by the Estates at €30, it was sold for €830 (plus 11% costs) in June 2022, before being resold in August 2022 to an antique dealer who restored it and now puts it on sale at the price of 9 €200. Both the first buyer and the last antique dealer did their job perfectly, except that the latter had no knowledge of the provenance, and therefore could not indicate it on the description. The Grignon origin was therefore lost.

5. Stamp of Nicolas Petit on the piece of furniture offered for sale by the antique dealer

What the Domains say in thearticle of World of January 11, 2023: “ There was a missadmits Alain Caumeil, the boss of the DNID, not on all the furniture but only on the Senna. The rest of the goods would not have been kept by the Mobilier national. is therefore not correct. The other furniture might not have been kept by the Mobilier national, but it is unlikely that he would have agreed to this sale (and if he had, it would also have been a scandal). Because it is certainly less exceptional furniture than the Sené but nevertheless remarkable (Nicolas Petit is a good cabinetmaker) and which was also part of the original furniture of a historic monument. When we know the disastrous dispersal of the furniture of the great residences that we have constantly denounced here (see in particular this article), that the State is itself one of these skinners, even involuntarily through incompetence, is even more reprehensible.

It is obviously out of the question for us, as we have already said, to question the buyers and resellers of this furniture. For this chest of drawers by Nicolas Petit, the only reasonable and moral solution would be for the Ministry of Agriculture [1] takes its responsibilities, and buys the piece of furniture to reinstall it in the Château de Grignon with protection in situ taken by the Ministry of Culture, which is no less responsible than him for this fiasco.
Unfortunately, it is obvious that the state will remain inactive. The Mobilier National, which we interviewed, replied that it ” favors to date the recovery of the living room set consisting of chairs, sofa, armchairs and console. Discussions with the holders of this furniture are still ongoing. [2] and so he wouldn’t do anything to the rest of the furniture.

We are therefore launching an appeal to our readers: if a patron could buy this piece of furniture and offer it publicly to the Ministry of Culture for assignment to the Grignon estate [3] – it is hard to see how the latter could refuse it, he would make a nice gesture, a symbolic gesture, and he would put the State in the face of its incompetence. And such a donation would of course be deductible, which would only cost its generous author the sum of around €3,200.