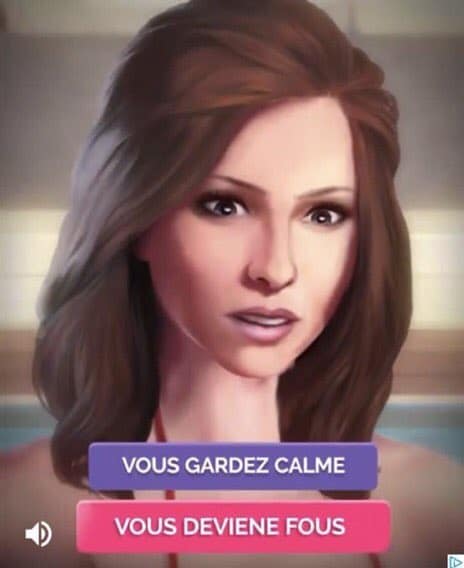 Absurd, stupid or downright trashy, they stop at nothing to capture our attention, they flood our social networks. How do the often misleading mobile game ads come about?

A woman beaten and presented as ugly and getting a makeover to please her husband who rejected her, a criminal must decide between having a threesome with two girls or becoming the new godfather of the mafia or even a young girl farts in a jacuzzi and turns her friends into zombies… You must have come across these strange, often trashy and ultra sexist videos supposed to advertise a mobile video game. They are found before watching a YouTube video, on Facebook, interspersed between two Instagram or Twitter posts. They multiply and are noticed by their bad taste. A Twitter account, titled Mobile Game Hell has decided to list them all, for our greatest pleasure.

Contrary to what one might think, these low-ceiling ads created for the most part internally by development studios, absolutely do not represent the content of the games they are talking about. Their sole purpose is to catch as many (very) young Internet users as possible and encourage them to download the application. When discovering that it is not at all the same product, a majority of them will uninstall it immediately. But that doesn’t matter: the studios responsible for these productions seek above all to hook what are called “whales”. This is an extreme minority of players who will spend a lot of money to get to the end of the game. This strategy is largely profitable. In 2021, the mobile video game industry generated $116 billion. In February 2022 alone, the most engaged gamers spent $6.6 billion on microtransactions. It must be said that the vast majority of these apps have very frustrating gameplay mechanics that limit users in their progress. The latter are then encouraged to spend to unlock more content and therefore progress more quickly. These mechanisms are similar to those of slot machines found in casinos. They present the same ethical problems.

And the Oscar for Worst Screenplay goes to…

To attract customers to mediocre games, in an extremely competitive environment, the studios have therefore gradually plunged into an outrageous one-upmanship that is becoming absurd. From the very first seconds, the videos are ultra-sexualized, highlight logics of humiliation, especially vis-à-vis women, and use limitless pee-poo humor. We often find the same “scenario tricks” such as that of the woman who must take revenge on a husband who rejected her by getting a makeover.

The case of the “dumb player” is another classic scenario of these advertisements. The video shows a riddle that could be solved in two seconds with a catchphrase like “only 9% of players will succeed”. A finger supposed to represent a mobile player tries several possibilities and misses his shot each time. The idea is obviously to flatter the intelligence of the spectators, but also to frustrate them so that they want to download the game and “do better” than the player in the video.

All these videos form a “grammar” of trash which does not only concern advertisements for mobile games. BFMTV journalist Raphael Grably highlighted the third most watched video on Facebook by the French. This is an outrageous ad blithely making fun of obese women and promoting a page called “happy woman” and whose aim seems to be to provoke the click.

We all know the famous adage of Friedrich Nietzsche: “If you look long into the abyss, the abyss also looks at you.” This quote could apply to mobile game ads that have almost become self-aware. It is therefore not uncommon to come across a video that “denounces” these misleading advertisements to better sell you a game based on a play to earn mechanism.

One actor, however, stands out from the rest of the pack. It is Merge Mansion, a rather ordinary game whose advertisements are small jewels of inventiveness and absurdity. We see a young girl trying to talk to her mysterious grandmother who does everything to avoid a confrontation. The content of these sketches obviously has nothing to do with the final product, but at this level of quality, we are ready to give up.

“You’re going crazy”: where do the trashy mobile game ads come from?