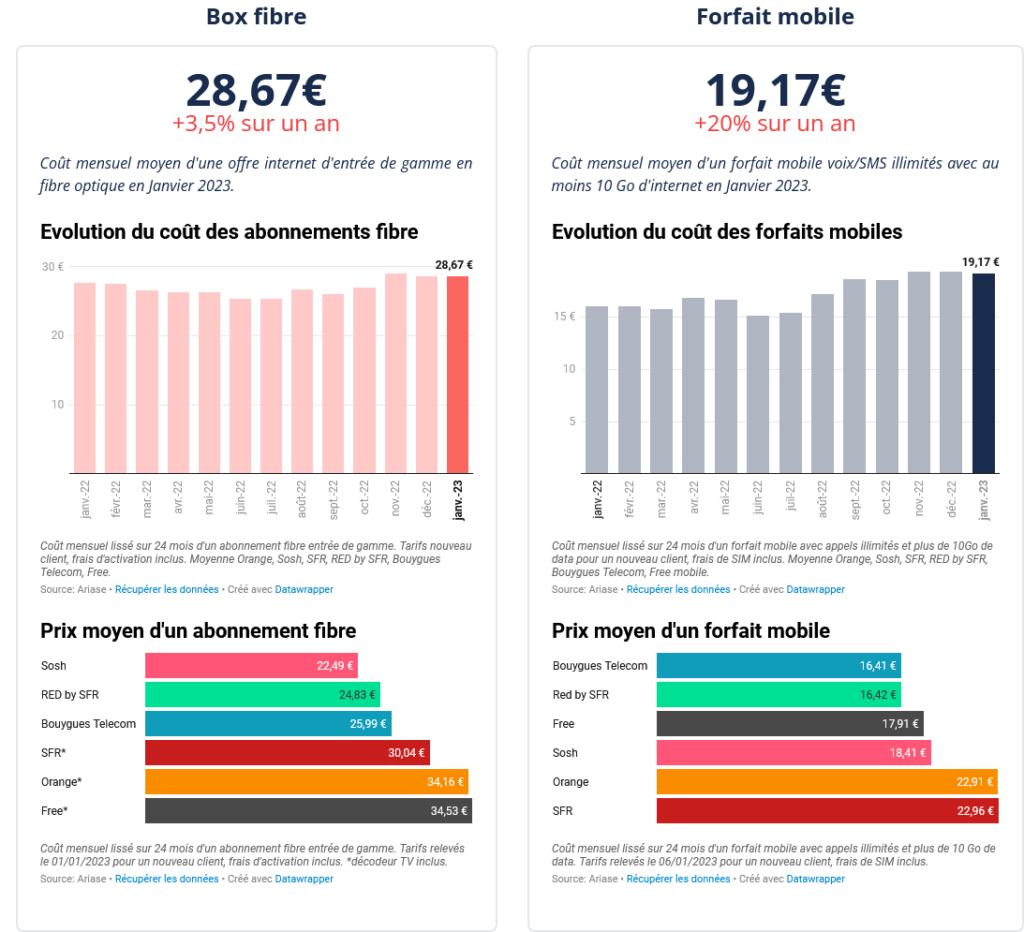 In 2022, the average price of mobile plans increased significantly in France. But this is an increase to be qualified in view of the fall in prices over the past ten years.

After years of decline in landline and mobile, the price of packages is rising again. This is the observation made by the comparator Ariase for the year 2022 and the month of January 2023. In the space of one year, it is the mobile subscription segment that has increased the most, with a 20% jump. An increase in the fixed line is also to be noted, but is much more contained (+3.5%).

To establish these trends, Ariase used a mobile phone plan with unlimited calls and more than 10 GB of mobile data for a new customer, including the cost of the SIM card The comparator then established an average between Orange, SF, Bouygues Telecom and Free Mobileand also including their low-cost branches Sosh, RED by SFR and B&You.

According to the Ariase barometer, you now have to spend an average of 19.17 euros per month for a mobile plan, compared to 16 euros in January 2022, an increase of almost 20%. It is from August 2022 that the upward trajectory is observed, after fluctuations during the first half of the year. The same movement can be seen in the fixed, with a lesser magnitude.

However, this photograph hides disparities between operators. Ariase notes, for example, ” that Orange and SFR maintain their prices over one year “, while an increase of 58% is noted at Bouygues Telecom through its “low cost” offer. B&You. On average, however, the price at Bouygues Telecom is 16.41 euros, where Orange and SFR are close to 23 euros. These last two contain more prices also because they are already at relatively high levels.

An increase in the price of packages over one year, but…

The observations of the Ariase comparator must be nuanced on two levels. Internationally, the French market remains one of the most competitive and affordable. In 2017, an evaluation relayed by The Parisian showed that a French package cost less than in the United Kingdom, Italy, Spain, Germany or the United States, with sometimes notable differences.

In addition, the French telecoms market has generally only declined for more than ten years. This is shown by thefixed and mobile services price index of the telecoms regulatorupdated in May 2022. We observe a decline in both segments, with a notable collapse in mobile when Free arrived, as the fourth operator.

In this respect, the increase noted by Ariase is fair if we restrict the comparison to the past year. But if we take a longer range of time, this is no longer quite true. Before Free Mobile entered the fray, prices were much higher in 2011 and before. They were also on average more expensive in subsequent years.

After years of decline, in 2022 the regulator observed a stabilization and an increase in the price of mobile services for the general public, with an increase of 0.6% on average. Generally speaking, after a sharp drop at the start of the 2010s, and continued erosion until 2019, prices now tend to stay at the same level.

If France remains one of the countries whose prices are the most attractive in the world, at least in the West, the fact is that telecom operators now want to raise the price of fixed and mobile plans — to absorb on the one hand the costs they face and in the name of investment in the networks (for fiber, for 5G, for maintenance, etc.).

This can also be seen from time to time in the news of mobile telephony. Whether it be SFR, Orange, Bouygues or Free Mobile, operators have sought to push increases in packages, by offering more mobile data in exchange or by giving access to the 5G network (which is in the deployment phase). Initiatives not always well received.