Between its new Zen 4 CPU architecture, the arrival of the brand new RDNA 3 GPU architecture, the implementation of the first AI coprocessor and 4 nm engraving, AMD has, like in poker, gone technological “all in”. With the ambition of launching the ultimate chip for PCs combining high power (the chip dissipates between 35 and 54W) but very thin and light.

AMD today launches its new batch of processors for portable PCs. A family of several ranges of chips ranging from 15W to 54W, of which one range stands out: the Ryzen 7040. Let’s immediately get rid of a little rant about the naming of the different ranges. AMD had the brilliant idea (no), to entrust the naming of new chips to a zealous engineer rather than a marketing pro. Marketing may be “bad” to you, but “good” marketing happens to exist. And it allows, for example, to properly name the products in order to recognize them easily.

And this is where AMD’s naming, admittedly very logical, misses its mark. Because according to the ranges, AMD has mixed engraving technologies, generations of CPUs and GPUs, etc. By putting all this under the umbrella name of “Ryzen 7000”. In this shambles, a range of chips stands out: the Ryzen 7040 (code name Phoenix). For the good and simple reason that it represents a technological “all in”.

4nm engraving and all state-of-the-art technologies 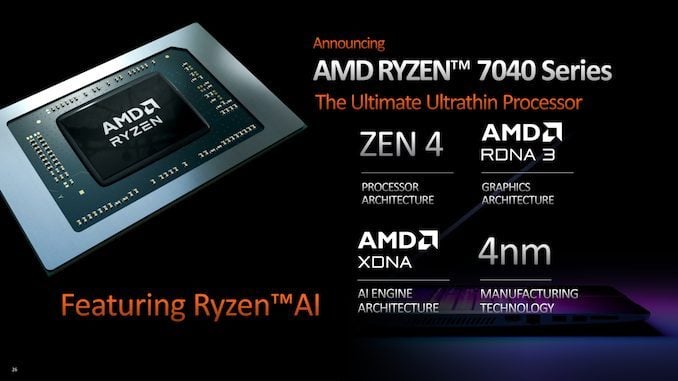 Taking advantage of TSMC’s expertise in the mass production of chips for smartphones, AMD was able to use the 4 nm engraving process. If that doesn’t speak to you, here is the information explained differently: for the first time in years, computer chips are engraved as finely as chips for smartphones!

AMD is also paying here the luxury of getting ahead of Apple, which has remained at 5 nm for its M2. Evolution of the 5 nm process, the 4 nm etching offers a small additional density of the logic part (the transistors dedicated to the calculations) but also a reduction in energy consumption at a frequency equal to 5 nm. Faced with the Ryzen 7040, Intel can only align chips engraved in Intel 7 (a super 10 nm). AMD could therefore have a big advantage in the designs of the most compact. 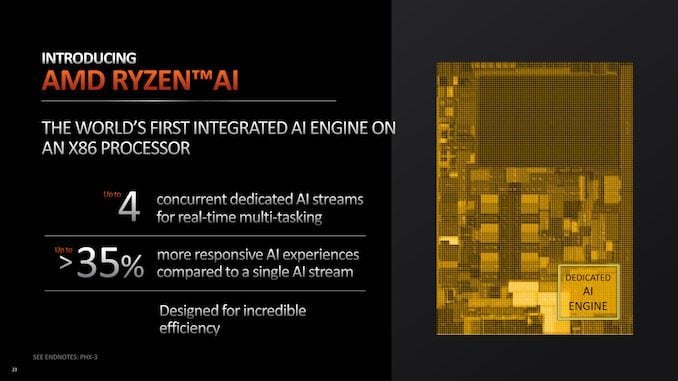 This is all the more so since the American has, as we have said, deployed all of its latest technologies en masse. And when we say “all”, there is no exaggeration here. The CPU goes for the first time in Zen 4 architecture, the integrated GPU (iGPU) stamped Radeon 780M is designed on the brand new graphics architecture RDNA3 which powers the latest RX7000. And above all, AMD introduces its first artificial intelligence processor, Ryzen AI – again, as in smartphones. This block of the chip is based on the XDNA technology developed by Xilinx (whichAMD acquired between 2021 and 2022) and can handle up to four AI tasks simultaneously. Our colleagues from AnandTech have heard from AMD that their AI chip would be ” up to 20% more efficient than Apple’s which obviously remains to be proven.

Read also : Intel launches its 13th generation Core on laptops: everything you need to know (January 2023)

Without even having had the first three chips announced in the hands, we can expect an increase in performance at all levels and lower consumption at equal load. But by design, these all-in-one processors will be integrated into specific chassis. No, not (yet) in ultraportables…

The market and the formats of portable PCs being very varied, it is necessary to circumscribe the machines that AMD targets with its new super processor. With a basic heat dissipation range between 35 and 54W, these are not the classic “office” high-end ultraportables, more often around 15-28W. According to AMD, the Ryzen 7040 chips are aimed at “thin & light” designs, that is to say machines offering high performance in the thinnest possible chassis. If their iGPU seems able to run all the games on its own in better conditions than the previous generation, the reality is that the frames with 35-50W CPUs are generally accompanied by dedicated GPUs.

Depending on the performance gains of the RDNA3 architecture, we could however see Dell XPS15 type machines being delivered with this single chip. In any case, the 12 RDNA3 cores, which promise to be up to 50% more efficient than the RDNA2 cores of the Ryzen 6000 Mobile range, will be able to run all slightly demanding graphics applications. And if for now only “HS” chips between 35 and 54W are announced, the good news is that AMD should, later this year, unveil “U” versions of these processors. Chips that are just as cutting-edge in terms of technology (Zen 4, RDNA 3, 4 nm engraving) but whose TDP should be between 15-25W. A successor to the excellent Ryzen 6800U which should, once again, benefit from a real jump in graphics performance in formats, this time, ultraportable.

The first laptops equipped with AMD Ryzen 7040 chips should be available early next spring.

Will the Ryzen Mobile 7040 be the essential laptop processors of 2023?