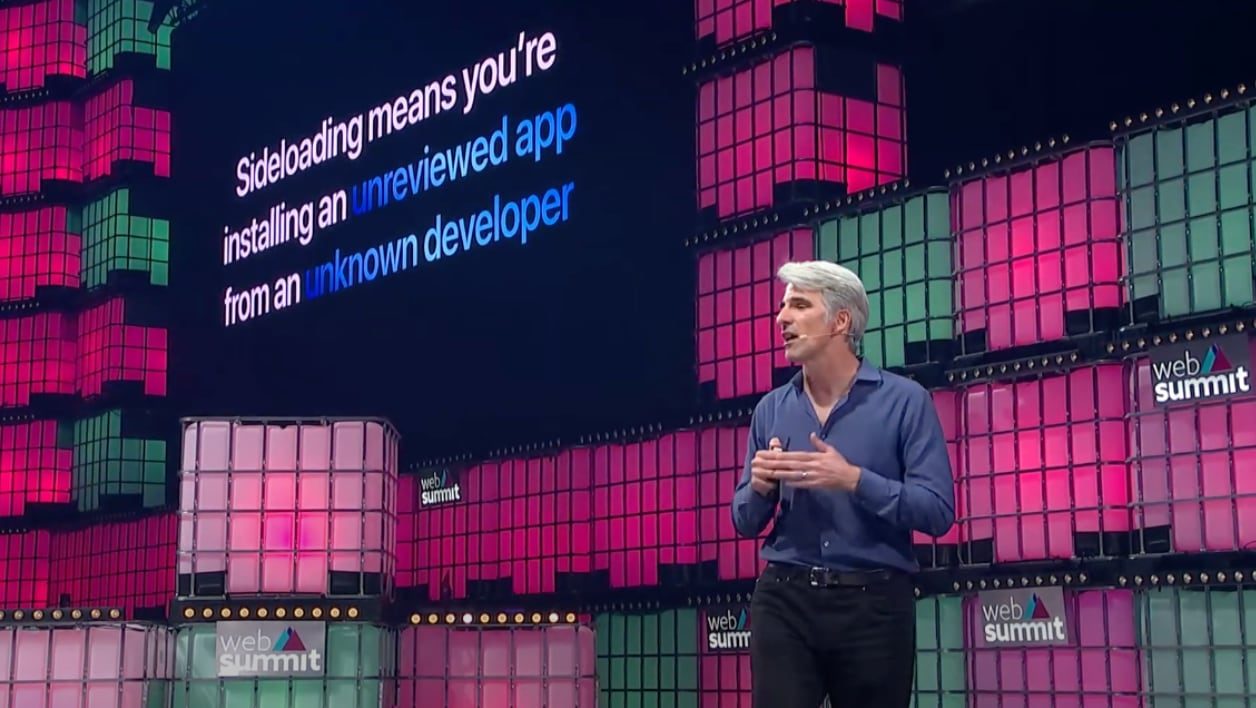 A bolt from the blue. According to Mark Gurman, Apple is preparing the opening, forced march, of iOS. It could all start with allowing third-party app stores and continue with opening up the messaging system and the big replacement of default apps on its iPhones and iPads.
The American giant is indeed constrained by the regulation on digital services, or DSA, in English, and the regulation on the digital market, or DMA. These two European laws oblige the major digital players (mainly the GAFAMs) to open up their platforms to competition and offer more choice to their users. A positive obligation, but which actually raises many questions, in particular on the security of the devices, especially in the very closed framework of the App Store, from Apple. This unique gateway to applications on iOS has been, until now, one of the reasons for the good security of the mobile operating system.

Anyway, according to the journalist of Bloombergdevelopers and engineers in charge of services would work hard to allow the opening of key elements of Apple’s platforms.
Thus, they would set up the possibility for users of iOS and iPadOS to install applications without going through the App Store, from Apple. the sideloadingas it is called, has long motivated the jailbreak smartphones from the Californian giant and has also been at the heart ofa legal battle between Apple and Epic Games in the United States.

The end of the App Store as the only gateway could have security consequences – it was by the way one of Apple’s major arguments in its communication and lobbying campaign before the DMA and DSA vote. Even if it will be necessary to wait to take the measure of the possible changes in this field, and that Apple will certainly have to develop new tools to maintain the security of its users.

Moreover, to protect users from risky applications, Apple engineers are considering making certain security prerequisites mandatory, even if the software is downloaded outside the App Store. These apps may also need to be verified by Apple, as is currently the case, prior to distribution. Of course, this verification would have a cost, a new form of commission. We imagine that it would of course be less important than the minimum of the current 15%.

Moreover, according to Mark Gurman, Apple has still not settled an essential point of the Digital Markets Act: will developers be allowed to install third-party payment systems within their app? In other words, will developers be able to bypass Apple’s commission on in-app purchases?

This obviously touches the heart of the problem for Apple. The end of almost total control over the single App Store indeed represents a significant potential shortfall. Even if its 30% commission no longer applies to all applications and services within its App Store, the windfall represented by the various commissions is a veritable torrent of annual income. Apple could therefore be tempted not to dry it up too quickly.

Thus, Europe accounted for no less than $95 billion in revenue during Apple’s last fiscal year, from all sources. The App Store would account for 6% of the giant’s total revenues, and only 2% would be generated by Europe, according to the statistical analyzes of Bloomberg.
In order not to completely compromise this source of income, and according to Mark Gurman’s sources, the new adjustments made to iOS would be thought to be applied only in Europe at first.
The work carried out could however serve as a basis if other countries or regions of the world imposed a similar legal framework. The United States, Apple’s main market, are working on a legislative project quite similar to the European DSA.

Apple will therefore have to learn to deal with the competition, and to share this cake. This is undoubtedly great news for users and for developers – especially the biggest ones who could only escape the 30% “tax” in certain cases – if their application fell into certain categories: News Partner Program for the media, more ad hoc agreements with streaming players such as Amazon Prime Video, etc.

Openness at all levels

But the App Store isn’t the only change Apple is going to face. The two texts will impose other constraints on it by highlighting the choice left to users. For example, it should be possible to easily change a default application. Apple has already started to open up on this point, and now allows you to remove most of its native applications. Nevertheless, there are still strong locks, this is particularly the case around its browser. Not only Safari remains a pillar of iOS but technically all other available browsers are forced to use the same rendering engine, WebKit, carried by the Cupertino giant.

Apple would also work to open more of its APIs to third-party applications. This would amount to giving more access to central functions of iOS to applications published by other players.

Some material elements could also be opened up more widely. This would be the case for camera modules and technologies or the NFC chip, which is only accessible by Apple’s Cards app. This should benefit users by giving them more choice, although the issue of security is never far away.

The thorny case of Messages

Even more strategically, to differentiate itself from the competition, Messages will be at the heart of the turmoil. Because it will not only have to become more accessible to third-party developers but also be interoperable with other messaging platforms. However, it is enough to see the rolling fire maintained by Google for Apple to adopt the RCS standard to understand that the road will be long. Tim Cook’s company seems to be considering interoperability, but without this standardwhich is now de facto that of Google and put forward by the Mountain View company.

According to the journalist of BloombergApple engineers also believe that opening Messages (and iMessages) could threaten the end-to-end encryption offered by the platform and other user privacy features, whether they have been introduced from the start or recently reinforced.

Mark Gurman indicates that the adaptation effort for Apple’s software and services is led respectively by Andreas Wendker for the part software, and by Jeff Robbin for the service part. The first is a vice president of software for a long time within Apple and is placed directly under the orders of Craig Federighi. While the second responds directly to Eddie Cue.

According to the journalist BloombergApple invests a “significant amount of resources in this effort”. Obviously, this project is not very popular within the company, since it goes against all the strategy put in place until now. Some developers would also see this site as an unwelcome distraction that slows down the development of important future functions, according to certain sources from our colleague.

However, Apple is following a tight schedule since all these changes should be integrated into iOS 17. The next generation of the iPhone mobile operating system, which will probably be introduced next June during the WWDC opening keynote.

The consequences of the Digital Services Regulation and the Digital Marketplace Regulation on tech giants, in general, and Apple, in particular, have not ceased to be talked about, or even revealed. One thing is certain, the Cupertino giant will have to adapt as it has never had to. In view of the sketched sites, we understand that theadoption of USB-C by Apple, also imposed by the European Union, is ultimately only the least of its worries…

DMA and DSA, after adoption, the long time of entry into force

The legislative process therefore took almost two years. But the regulations have now come into force. So for the DSA, all but the smallest platforms have until February 17, 2023 to publish their monthly active user counts. The text provides for different obligations for small businesses, which employ fewer than 50 employees and achieve less than 10 million in annual turnover. The threshold above which a company is deemed to be a large platform is 45 million active users per month within the European Union.

In any event, based on the information returned, the European Commission will determine which large companies, such as GAFAM, will have to fully comply with the digital services regulation. The DSA will fully apply, and to all companies, regardless of their size, from February 17, 2024. As a reminder, a company that does not comply with the DSA could be subject to a fine representing up to 6% of its worldwide turnover.

The DMA, meanwhile, came into force on 1er November 2022, and will be applied from 2 May 2023 to companies which have an annual turnover of 7.5 billion euros (or more) within the European Union or which have a market capitalization of at least minus $75 billion.

Therefore, access controllers – the famous gatekeepers – will have two months to declare their “essential platform services” to the European Commission. It will then rule within 45 working days to qualify, or not, these actors as access controllers. The obligations resulting from the regulation on digital markets will therefore apply to them from March 2024.