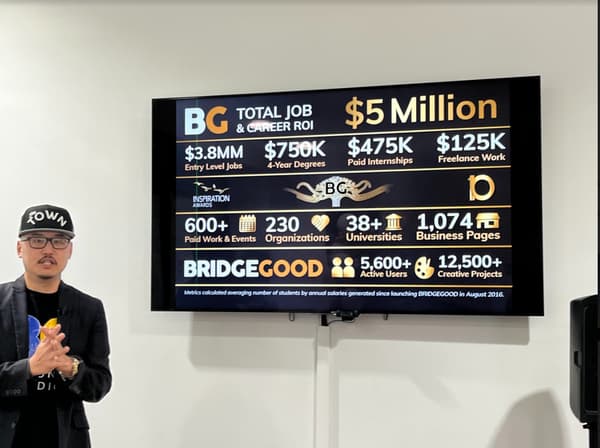 Overnight, after the takeover of Elon Musk, associations saw their aid from Twitter’s charitable program cut off. Tech&Co went to meet some of them in San Francisco.

Black suit, sparkling blue sneakers and cap screwed on his head, Shaun Tai is used to talking to journalists. In the bay of San Francisco, in Oakland, he visits the premises of the Bridgegoo association, installed in a huge fully equipped hangar. Sofas, screens, computers, everything is done to accommodate students who wish to enter the tech sector.

“A few weeks ago we were to have a meeting at Twitter headquarters which was canceled,” he slips during the visit.

Because since 2013, Bridgegood benefited from the Twitter for Good program which provided financial, human and material aid to associations. The program was completely cut after takeover of Twitter by Elon Musk last October and Bridgegood is one of the associations affected.

Height of the situation, Shaun Tai, the co-founder of the association, arrived in Teslathe cars imagined by Elon Musk.

Founded in 2009, the association’s mission is to provide young people who do not have access to the tech sector with the skills and resources necessary to obtain jobs in Silicon Valley. To do this, the association organizes, for example, meetings with Twitter employees, including UX designers, to interact with students and give them advice.

Visit canceled at the last minute

“Getting a job in tech is probably the hardest thing to do, so we’ve established connections with the biggest tech companies in Silicon Valley,” continues Shaun Tai.

It all started in 2013 with Friday for Good which turned into Twitter for Good. The idea was that two or three times a year, Twitter employees take part in association workshops. “Until today we had a very good relationship with Twitter, from board membership to monetary grants to head office tours where we brought 20 to 40 students,” recalls Shaun Tai.

But on November 18, not everything goes as planned. “We were excited for our students to come to Twitter to see what it’s like to work at a big tech company. The same week we had an appointment, they emailed us to cancel our meeting, because of what’s going on at Twitter right now,” laments the co-founder. And for good reason, the entire Twitter for Good team has been fired.

When he learned that Elon Musk wanted to buy Twitter, he first thought it a joke, “but when it became a reality, I think we weren’t sure what was in store for us and we were in confusion. After the takeover, I hoped that the same team that we worked with would remain in place but unfortunately that was not the case.

He immediately put himself in the shoes of the students. The latter never had access to the world of tech and really counted on an association like Bridgegood to bring them to these companies.

“Musk is focused on the product, not the community”

Since the event was canceled in November, the Bridgegood teams no longer have any contact with Twitter. “I even posted a tweet mentioning Elon Musk recently,” Shaun Tai jokes. In vain.

For him, “Elon Musk focuses more on the product and not on the community” especially on that which surrounds Twitter. “If Elon Musk is a businessman, how do you convince him that helping the community, having diverse voices and other perspectives is good for business? That’s my goal with Bridegood.”

Shaun Tai wants to continue this partnership to give students the opportunity to discover tech jobs. The consequence is not so much financial for the association, it points above all to the loss of earnings for the beneficiaries. “Discussing with employees is better than monetary aid because the tech changes every six months. I hope that Elon Musk will take the program back to its base to make it even better”, concludes Shaun Tai with a hint of hope.

“We never collected the keys to the premises”

The Compass Family Services association experienced the same scenario. Its mission is to help homeless families in San Francisco to find a stable situation. Compass’ offices are located a stone’s throw from Twitter’s headquarters. Abbey Leonard, head of communications for the association, regrets the end of the Twitter for Good program: “he was a really special partner, which makes his loss even harder”.

For four years, Twitter has supported Compass through a program called NeighborNest. Through this partnership, Twitter provided a space that included computers, a computer lab, childcare space and meeting rooms. People could come to take part in computer courses, print documents, access the Internet, but also look for accommodation, a job and benefit from assistance.

During the pandemic in 2020, Twitter temporarily closed the space. “We had just established an agreement to reopen it in November, except that we never recovered the keys to the premises, and the whole project went up in smoke,” laments the manager. The partnership was material, human, financial and administrative since Twitter was represented on the association’s board of directors.

On the side of Twitter, Karl Robillard, the person in charge of the Twitter for Good program, was also dismissed. The association therefore no longer has any contact with Twitter. “Even the HR we were talking to left. We wouldn’t even know who to talk to since everyone left.”

“Now we have to think about how we are going to provide technological assistance to these families. We have tried to find ways to continue to help them. We are currently looking for other partners but it was a solid program, to find a similar partnership is going to take time,” says Abbey Leonard.

On November 14, the Twitter for Good special week takes place like every six months. In this context, Twitter organizes activities between its employees and volunteers from associations including Compass. This edition was a bit special because it was organized by former fired Twitter employees.

The end of this partnership does not mean the end of the association. The first week of December, Compass organized a collection of toys for beneficiary families. The number of donations far exceeded the association’s expectations: “we are really grateful, the children are going to be so happy”, enthuses the manager.