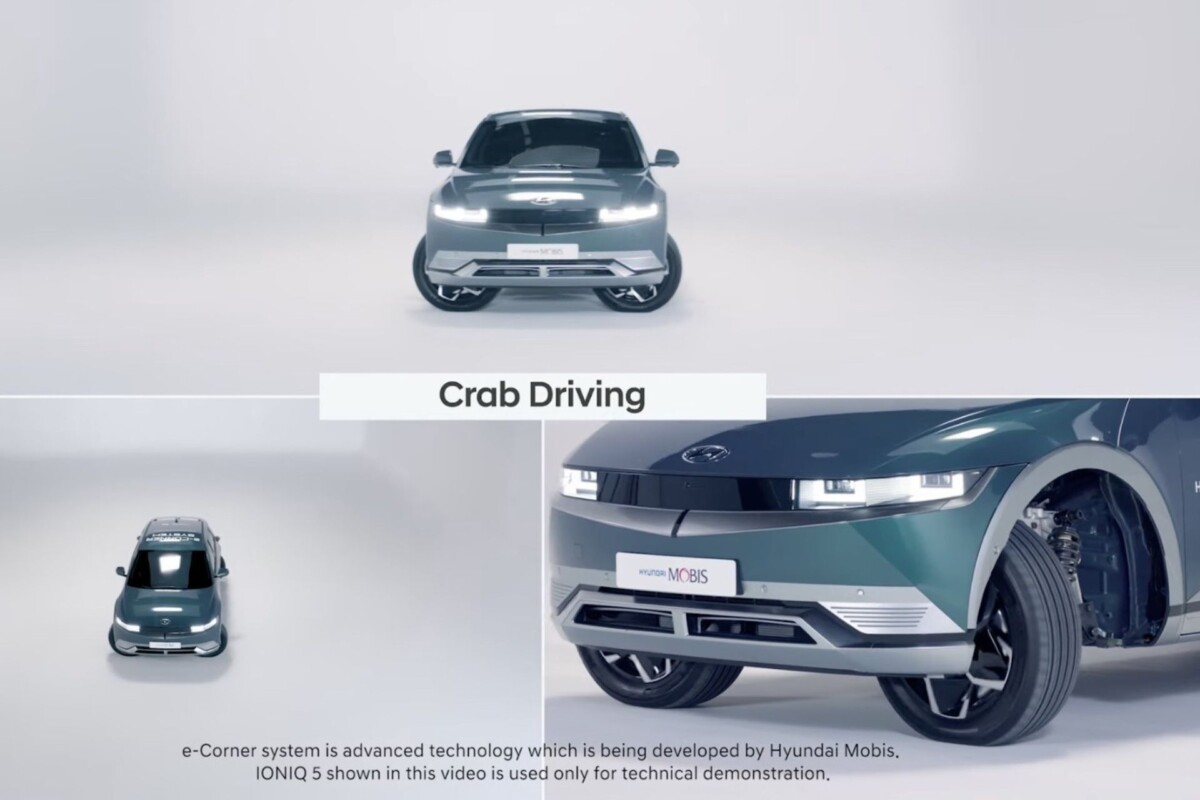 Hyundai’s division dedicated to spare parts and on-board technologies, Mobis, unveils a new feature for the Ioniq 5. The electric compact can now move like a crab, thanks to its wheels which turn at 90 degrees. But for now, nothing has been said about a series marketing of this prototype.

It has been almost two years since the Hyundai Ioniq 5 was unveiled in February 2021. The brand’s first 100% electric model after the Ioniq, also available in standard and rechargeable hybrid, the compact is still being talked about and does not seem to have suffered from the passage of time. Last June, the manufacturer notably offered it compatibility with OTA (over-the-air) updates from a distance. But that’s not all.

Hyundai was indeed present at the Las Vegas CES, which opened its doors from January 5 to 8, via its subsidiary Mobis. Founded in 1977 and little known to the general public, the company forms the “auto parts and service” pole of the Korean brand as well as Kia, supplying spare parts and technologies such as the semi-autonomous driving. But if she is talking about her today, it is for an innovation of a new kind.

Indeed, the division of Hyundai went to the United States with an amazing technology in its suitcases, dubbed e-Corner. Detailed in a video published on Youtube, this in particular facilitates parking, thanks to a crab movement. In effect, the car has four steering wheels, which can be positioned at 90 degrees.

But that’s not all, because with this device the car is also able to turn around on its own. A feature that reminds us of the Rivian R1T, equipped with a technology called Tank Turn and operating in the same way. Nevertheless, the brand has filed a patent describing a new version solving some problems of the old. Mercedes will also offer a similar system on its future EQG 100% electric.

But how does this technology work? For now, Mobis has not been very vocal about this e-Corner system, contenting itself with demonstrating its many features in a video. However, the American site InsideEVs gives us a bit more detail, explaining that this device works with a module incorporating an electric motor and shock absorber, as well as a braking and steering system by wire, operating electronically.

Thereby, the e-Corner could be installed on any electric car. A technology which is then reminiscent of that offered by the Hummer EV, which also has a pretty impressive crab mode. This is also the case of Tesla Cybertruckthe production of which should start during the year as announced by Elon Musk. But also brand new YangWang U8, the extraordinary electric SUV of the Chinese giant BYD. Which also reminds us the four electric motors of the Lightyear 0.

But in all these cars, the features are less impressive and less capable than with Hyundai’s technology. The reason: the wheels cannot turn 90°.

But all these vehicles are not the first to be equipped with this technology. Indeed, the idea dates back to 1927, when a car was fitted with two front wheels capable of turning 90 degrees to facilitate parking. In the 1930s, a system in the form of a rear-mounted wheel that allowed the car to park more efficiently was also unveiled, which could be fitted to any vehicle.

It now only remains to know if the e-Corner will one day arrive on the Ioniq 5, as an option for example. Thus, this device could eventually replace the rear steering wheels, or complete them. We imagine quite a remote update allowing you to take advantage of a crab mode previously installed on all the cars produced, once this technology has been sufficiently democratized. What solve the problem of parking electric vehicles, sometimes more difficult to park than their thermal equivalents.

The Lightyear start-up will use an electric motor with exceptional efficiency, directly integrated into the four wheels of its solar car.
Read more

The Hyundai Ioniq 5, Tesla Cybertruck and Hummer EV have one amazing thing in common