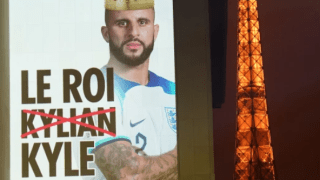 The daily “The Sun” had projected several visuals on Friday December 9, 2022 in the streets of Paris, featuring the stars of the “Three Lions” with “punchlines” for the Blues.

WORLD CUP – This Saturday, December 10 was a delicious evening for French supporters in more ways than one.

First of all, of course, they were able to savor the fine qualification of the French team for the semi-finals of the World Cup in Qatar, after a courageous and suspenseful match against England in the quarter-finals (2-1 victory, with a missed penalty by Harry Kane at the end of the match to equalise).

But the pleasure was double, since the daring advertising campaign of the British newspaper The Sunbefore the meeting in the streets of Paris, formidably turned against him.

In effect, The Sun had posted several advertising posters on Friday near the Eiffel Tower, where you could see photos of players from the English selection accompanied by little mockery with very “British” humor (see it in the video below): “ Come on the Rosbifs”, “Goodbye the Gauls”or “ King Kyle » with the word Kylian crossed out, in reference to the highly anticipated duel between Kyle Walker and Kylian Mbappe.

“‘The Sun’ takes hold of Paris ahead of tomorrow’s epic World Cup clash and tells the French: ‘It’s coming home'”, had also written the media in a message shared on social networks.

After the qualification of the Blues on Saturday evening, the British newspaper logically took an almost immediate backlash from many Internet users on social networks, who were quick to make fun of him (see the many tweets below), to evoke “karma” and above all to rename it The Seum – starting with the Renaissance political party, which even produced a fake front page – in reference to the slang word (meaning “to have it bad”) already widely used during the Mondial-2018 after the defeat of Belgium in the semi-finalsof which some of its players and many of its supporters had estimated that the “Red Devils” had played much better than the Blues and would have deserved to qualify for the final.

— After Foot The Review 📚 (@AfterFoot_Revue)

You were right folks, your boys are coming home! With their hands empty as usual 😍 #ENGFRA

THE SUN vs THE SEUM #ENGFRA

Go on ! one last for you @TheSun. Good evening with the “seum” 🤣

Where you are @TheSun

It should be noted that the English midfielder Declan Rice, like the Belgians in 2018, was caught in the act of “seum” after the meeting in front of the press, since he declared in particular about the Blues that“apart from their two goals, I don’t remember seeing them being creative”. “In my opinion, the best team lost tonight, and that proves our level”he added…

See also on The HuffPost :

The campaign of the “Sun” mocking the Blues turns against him, the French supporters savor