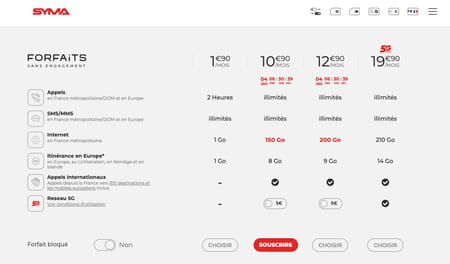 Bouygues Telecom and SFR are engaged in a merciless war by buying virtual operators (MVNO) one after the other. A disguised market concentration that is not to the benefit of the consumer.

Early May 2022, SFR acquired Syma Mobile, a virtual operator (or MVNO, for Mobile Virtual Network Operator in English )) which offered low-cost phone plans. The operator with the red logo – which since 2014 has belonged to the telecoms and media group Altice founded by Patrick Drahi – is not his first attempt: since 2021, he has already acquired Prixtel, Afone and Coriolis, three other virtual operators. But SFR is not the only one to tap into this pool of “external growth”: at the end of 2020, Bouygues Telecom, its most direct competitor, acquired El Telecom, Crédit Mutuel’s telecom subsidiary in charge of marketing the offers of five virtual operators, namely Crédit Mutuel Mobile, CIC Mobile, NRJ Mobile, Auchan Telecom and Cdiscount Mobile. In fact, a basic war has started between these “big” operators who thus recover millions of subscribers by keeping, or not, some of the brands acquired. And by forcing them to use their own network, when some, like Syma Mobile or Cdiscount Mobile, let their customers choose the network when they take out their subscription. Without saying so, in the absence of the return to three “big” operators that some hope for, we are witnessing a discreet but very effective concentration of the market which reduces the choice of consumers, before, perhaps, radically changing the rules of the game of competition.

Virtual operators: the end of a beautiful era

Launched in 2005well before the low-cost offers of traditional operators and at a time when these same operators (Bouygues Telecom, Orange and SFR) were fined a record amount of several hundred million euros for price agreement, MVNOs (virtual mobile phone operators) had their heyday and for a long time offered packages that may have seemed attractive to consumers. But they have since lost their luster. In September 2021, they still represented, according to Arcep6.9 million SIM cards (or 8.9% market share) against 8.8 million SIM cards (and 11.7% market share) a year earlier.

What happened? These operators, which are called virtual because they do not have their own network (much like the competitors of EDF or Engie who on the electricity market buy, sell, but do not produce electricity) , have not survived or been able to resist the various blows carried out over the years by the incumbent operators. And very often, the consumer who thought he was committed to an alternative operator finds himself having to integrate and subscribe to the commercial proposals of traditional operators.

It all started, shortly after 2012, with a first movement of consolidation marked by the arrival of a fourth mobile telephone operator (free mobile), then by the deployment of so-called low-cost offers (B&You, RED by SFR and Sosh) from its three competitors (Bouygues Telecom, Orange and SFR). Less competitive and not always benefiting from the firepower in terms of marketing and communication of their elders, some MVNOs then refocused on niche communities (professional markets, bank customers or football team supporters, or both for those wishing to acquire a credit card in the colors of their favorite club). This period was marked from 2014 to 2016 by the disappearance (i.e. by the takeover) by SFR of one of the most important players in the MVNO market, Virgin Mobile. The coup de grace was given in 2020 and 2021 with the successive takeovers by Bouygues Télécom, then by SFR ofEuro-Information Telecom and its five MVNO brands (NRJ Mobile, Crédit Mutuel Mobile, CIC Mobile, Cdiscount Mobile and Auchan Telecom) and the group Afone Participations (Reglo Mobile, formerly Leclerc Mobile, Prixtel, and Coriolis).

Each time, these operations – which the consumer perceives only from a distance – allow traditional operators to consolidate their customer base and therefore de facto to seize millions of subscribers (2 million for the Crédit Mutuel MVNO alone) from acquired virtual operators. A classic scenario in this area, for customers it is often time for strong recommendations. Thus, in the case of the takeover of CIC Mobile and Crédit Mutuel Mobile, we remember that the operators’ websites became inaccessible, that Bouygues Telecom quickly announced the end of the marketing of dedicated offers (CIC Mobile and Crédit Mutuel Mobile offering Bouygues packages): a diplomatic but firm way of redirecting customers to another operator than the one with which they had subscribed previously.

Today, if the MVNO market is only a shadow of what it was, some virtual operators float still. But for how much longer? Like La Poste Mobile which, via its 9,300 contact points (5,000 municipal postal agencies and 4,300 post offices managed by merchants) and benefiting from the SFR network, can boast of having 1.95 million subscribers. Or CTExcel, the MVNO of China Telecom (the largest operator in the world which in France uses the Orange network) which has just launched at the beginning of 2022 two post-paid packages with (80 GB or 200 GB of data in France metropolitan area), unlimited calls and texts in France…and unlimited calls to China.

It is difficult to say today what the mobile telephony market will look like in a few months or years. Will we see a final concentration with only three “maxi operators”, once Bouygues and SFR have reached critical sizes and Free Mobile has been swallowed up? What will be the operators’ pricing policy once all the MVNOs have been absorbed? Will we still find offers at low prices, without commitment, with perpetual promotions to attract ever more customers, as is currently the case? One thing seems certain: the consumer will be the loser, with reduced choice and rules dictated by behemoths.