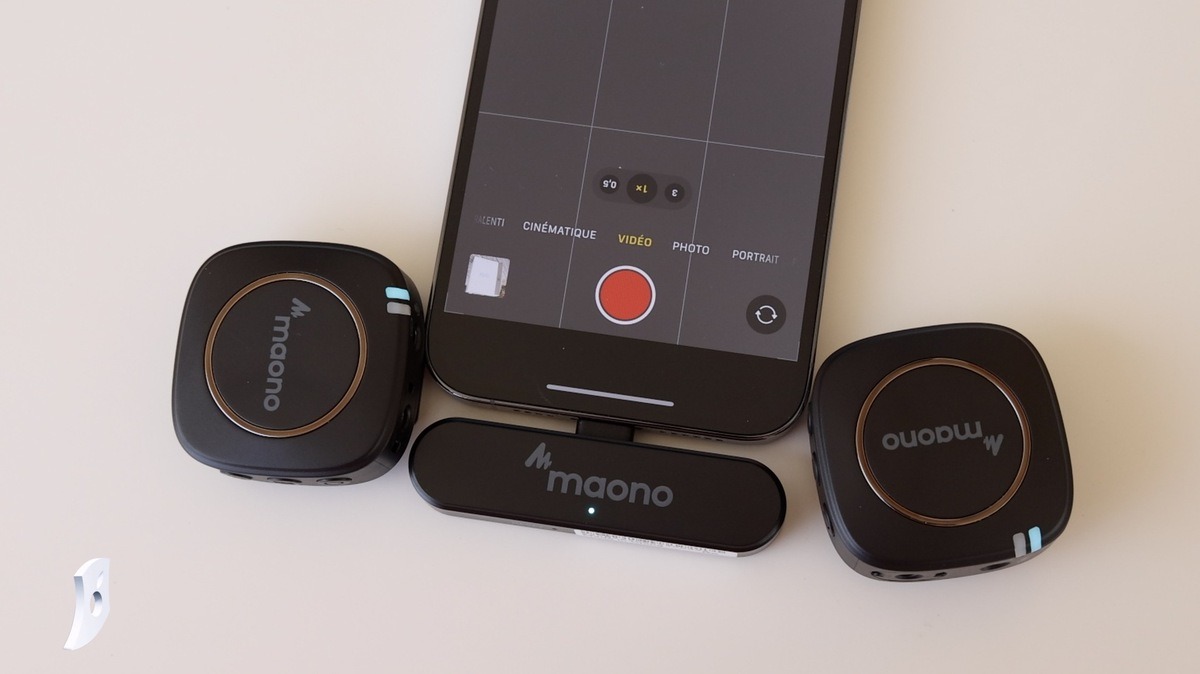 The manufacturer Maono has been offering for a few months a Lightning wireless microphone system for iPhonecompetitor of Rode Wireless Go, DJI Mic and others, but for less than 200€.

As on the Rode Wireless Go II, Maono directly offers a dual-transmitter with built-in microphone (a simple version is also available, but not in Ligjtning):

In the box, we find USB A/C adapters, windscreens and even 2 lavalier microphones (on jack), all in a carrying case:

In terms of size, they are comparable to Rodebut more rounded:

And a little thicker Also :

In terms of connectivity, everything charges via USB C, which is much more convenient than the still often used microUSB. Obviously, the Lightning receiver is powered by the iPhone.

On the upper part, we find a relatively good quality microphone (we will come back to this later) and a mini-jack port for an external microphone or the supplied lavalier.

As with Rode, a small clip allows you to place the transmitter directly on the collar of your t-shirtpolo or shirt:

On the edge, 3 buttons are present, to synchronize the transmitters, to mute them and to turn them on.

If a small blue diode indicates that they are onhowever it is impossible to connect headphones for possible sound feedback -It’s a shame in pro use.

The manufacturer announces – as often – a series of qualifiers for the sound part, but is this really the case?

As you can see in the video, the sound is very correct, the voice is clear, the spectrum is generally well respectedand the microphone (although omnidirectional) filters surrounding noise fairly well.

A small downside, however, there is a slight saturation when raising the voice, especially in the high frequencies, but the lack of feedback requires checking every outlet on the iPhone, which isn’t always practical. We will say thatin a controlled environment, there is no particular concern, but if you raise your voice or in a noisy environment, it may be more complicated.

The wind is also imperceptible with windshields, even if the tie version remains more sensitive to strong gusts.

The latency is quite low (20ms announced, which seems realistic) and the range is about 50m, but we felt some cuts at 30m.

Speaking of cuts, for having used the microphone several times in very windy environments, I sometimes encountered very significant cuts, making the sound completely unusable. Conversely, during the filming of this video test and during most of my tests, I did not have any particular concern… The whole question is whether these problems are on the margins, but that requires looking carefully at the takes on each shoot.

To choose, I find that the sound of the lavalier microphone is softerI prefer it to that of the transmitter, even if both are largely adequate.

At last, the announced autonomy of 6 hours seems fair enough according to our tests. In any case, after 2x2H of filming, the 2 microphones were still working perfectly. It is still rare to film 6 hours in a row, without recharging your devices.

If you opt for this Lightning version, very practical because it hangs directly on the iPhone, it will however be unusable on another device (camera, Android etc.). The USB C/Jack versions are more versatile but less easy to hang on our made in Cupertino phone.

Another major flaw, with the 2 active microphones, only one track is generated (in mono, therefore). There is then no way to separate 2 voices during an interview or to isolate a track if the second is too noisy. For once, the competition is better – but it’s more expensive.

So, shall we buy?

After a few months of testing, it’s time for the verdict! Is this double microphone sold for less than 90€ really worth it?

In use, the quality/price ratio seemed really good to us, especially since the number of accessories provided is impressive.. In comparison, Rode and DJI seem almost a little stingy…

The sound quality seems to us quite correct for TikTok, Vlogs and even some amateur filming. If we prefer to use it indoors, without too much noise around and in a controlled environment, we have been able to use it widely outdoors with wind (and noise) without too many worries.

Now, lack of monitoring forced us to use our good old Rode and Sennheiser for our shoots. In professional use, this kind of device does not offer enough guarantees, whether for monitoring, dual output (which is only mono here) or even the intrinsic quality of the sound, a little below competition that we usually use.

Maono’s Lightning wireless microphone is sold for €89 in the 1-mic version, and about twice as much with the double-mic version.