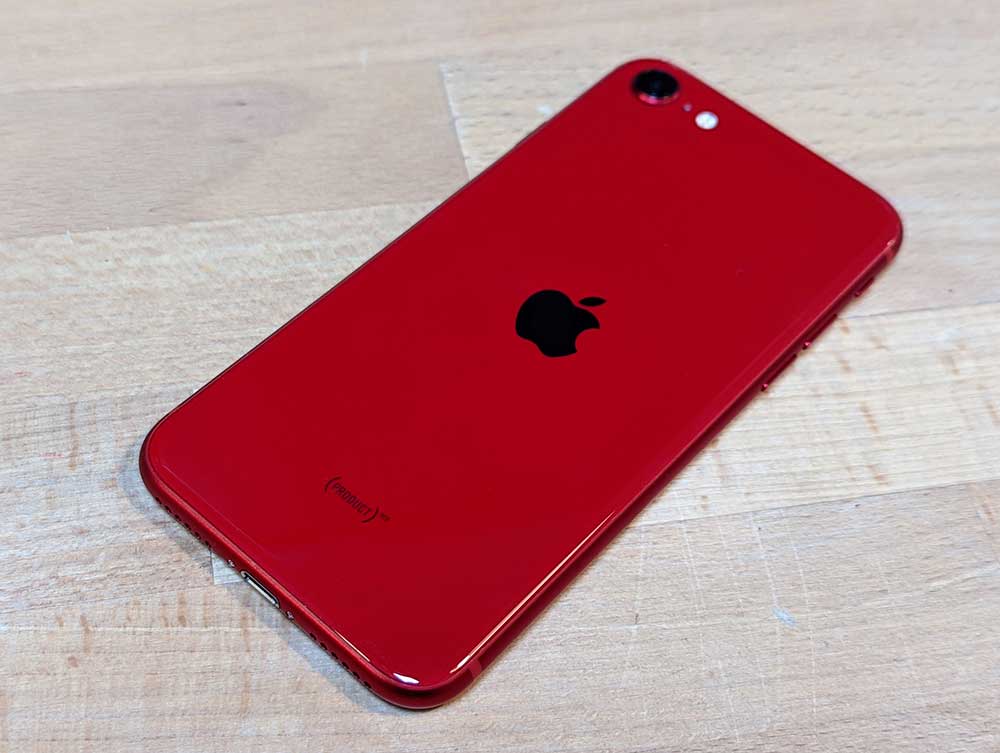 Apple has the precision of a Swiss watchmaker when it comes to unveiling its new iPhones. This is at least true for the flagship models, announced around the beginning of September each year. The Californian manufacturer, on the other hand, is less predictable when it comes to its SE range. The first iPhone SE was launched in March 2016. It then took four years to iPhone SE 2020 be unveiled in turn, in April. For the third generation, Apple did not wait so long, since the brand very recently announced the iPhone SE 2022.

We have been using it daily for a month now. A sufficient period for us to form an opinion on this atypical smartphone, especially since it also had time to pass through our Lab.

Do we really need to go back to the design of this new iPhone SE 2022? Making a design last for so long in the world of mobile telephony is a miracle! But does that make sense in 2022? As surprising as it may seem, the reduced footprint and rounded lines remain effective even today. The manufacturing quality is excellent, with perfect finishes. So that it is very pleasant to hold and handle the device.

Nevertheless, even if Apple has been able to create a timeless design for most of its small smartphone, there is still one point that can no longer be deluded: the screen occupancy rate, which has not budged a bit. iota since 2014. The display is therefore still framed by two large horizontal black bands. And if the bottom one can be justified by the integration of the Touch ID fingerprint reader – still as practical –, it is difficult to understand the reason for maintaining the top one.

We would have loved for the iPhone SE 2022 to take up the design of the iPhone mini, thus offering a modern screen format in a size that is still just as compact. But it will probably take a generation or two of SE before that happens. As it stands, if you bought into the concept of previous iPhone SEs, you’ll be very happy with the build quality and ergonomics of this one.

We are not going to dwell unduly on the touch screen of the SE 2022, since it therefore does not evolve compared to the one that was already found on the SE 2020. It is still a screen 4.7-inch LCD, for an HD definition of 750×1,334 pixels and a density of 325 pixels per inch. The resolution is therefore the same as that of the iPhone 6. It remains sufficient with regard to the size of the screen. If you are familiar with these models, you already know what to expect. For others, know that this display allows you to easily consult all the web pages designed for mobile, social networks, or even to manage emails. But if you have an attachment like a PDF or an Excel table, the iPhone SE 2022 screen turns out to be uncomfortable. Similarly, games called casualas candy Crush Where Clash Royale, are quite playable. For more ambitious titles, such as Call of Duty Mobile Where League of Legends: Wild Riftyou quickly feel cramped on such a small screen.

Faced with the probes of our Lab, this screen was extremely convincing, with a contrast ratio of 594:5 and progressiveness in tune. As often with Apple, the panel is very well calibrated in the factory and thus offers color fidelity close to perfection. This is rather good, because the possibilities of manual adjustments are limited.

The whole paradox of this tiny smartphone comes from the fact that it is as old fashioned on the outside as it is resolutely modern on the inside. It incorporates nothing less than the A15 Bionic chip, Apple’s latest in-house chip. This is the same high-end component found in the latest iPhone 13, 13 Pro, and 13 Pro Max.
It was already doing wonders in these smartphones with screens as large as they are well defined, and equipped with multiple photo modules. Needless to say, it doesn’t disappoint on the iPhone SE 2022 either. Fluidity in menus and general navigation is never faulted, while the most demanding games and applications run perfectly here. . Which is hardly surprising since the SE 2022’s 720p HD screen is less demanding than that of the brand’s larger models.

This is precisely the reason that makes us wonder if this power boost is necessary for a smartphone like the iPhone SE 2022. Yes, without the shadow of a technical problem you will be able to launch a game of Call of Duty Mobileof PUBG-Mobile or of League of Legends: Wild Rift. But these games are designed for larger screens. Apple claims that its A15 Bionic also improves photo taking and battery life. We will come back to these points a little later.

We still see a very good justification for the presence of this overpowered processor, and not least: the longevity of the smartphone. Apple’s reputation for tracking and updating its models is second to none. And with such a chip on board, the iPhone SE 2022 is certain to remain eligible for iOS updates for a long time to come. Unsurprisingly, faced with our very demanding performance test, it obtained the maximum marks, like its big brothers in the iPhone 13 series. It retains perfect fluidity, even for complex and extreme uses.

The photo part of the iPhone SE 2022 does not change significantly compared to that of its predecessor. We therefore find a single wide-angle photo module, equivalent to 26 mm (f / 1.8), integrating a 12 megapixel sensor. However, if the components seem identical to those found in the SE 2020, the new model benefits in theory from the contribution of the A15 Bionic chip. The manufacturer promises that this chip allows better image processing. In use, the improvements are present, but quite subtle. In optimal light conditions, the device can capture good shots, with a good level of detail and colorimetry that rings true.

But we would still have liked to be able to take advantage of more versatility, with for example a second ultra-wide-angle photo module. Similarly, no Night mode is in the game. The benefits of the A15 Bionic chip are manifested in Portrait mode, which offers a very correct rendering in most cases. The software processing compensates for the absence of several sensors to calculate the depth and clearly delimit the subject. Low-light photos also benefit from the chip. But only the shots that do not include movement offer a correct rendering in low light. We also remained unsatisfied in terms of the dynamics of the images captured: in gloomy weather with a very white cloudy sky, for example, we quite regularly found ourselves with a slightly underexposed subject in the foreground. However, a small click in the automatic image enhancement tool is usually enough to alleviate the problem.

In the end, even the iPhone SE 2022 can capture beautiful images when the light is good. However, if you have big needs and a lot of photography requirements, its capabilities may not be suitable for you.

The iPhone SE 2022 ignores the jack: it’s not really a surprise. The easiest way to use headphones or earphones other than those supplied will therefore be to opt for a Bluetooth model.

Like its predecessor, the new iPhone SE has two speakers. The audio quality remains average, but sufficient to follow a video, for example. Our measurements underlined a correct power with 69 dB and a frequency response in line with our expectations. The dip around 80 Hz is marked, but we have seen worse, including on more expensive smartphones.

Small, but strong, the smartphone has an up-to-date radio part with 5G, a first on an SE, wifi 6 (802.11ax) and Bluetooth 5.0. A very complete picture and for what is certainly the most compact 5G smartphone on the market.

We submitted it to our various Lab tests in order to establish an overview of its possible shortcomings, particularly in terms of sensitivity. The iPhone SE 2022 is doing well: on mobile networks, its sensitivity is very good, except for band 8 of 4G – a very common defect. It is even excellent in 2G. The wifi is also of good quality, while the Bluetooth does the job.

This rating indicates the ability of the smartphone to transmit and receive whatever the conditions (on 2G, 3g and 4G networks)

Apple never communicates on the capacity of the batteries present in its iPhone. Nevertheless, several repairers are quick to dismantle the brand’s smartphones as soon as they come out. We therefore know from several concordant sources that the accumulator of the iPhone SE 2022 offers a capacity of 2018 mAh. This is a little better than the 1821 mAh of the SE 2020. The manufacturer also promises that the A15 Bionic chip manages energy expenditure better. In use, we actually see the best. In classic use, the set remains nevertheless a little tight to take you through a very long day. By unplugging it in the morning, it takes a recharge around 8 p.m. if you plan to use it in the evening. The measurements carried out in the Lab enabled us to achieve a range of 9:49, one hour more than the previous generation.

Finally, like the vast majority of recent smartphones, the iPhone SE 2022 does not come with a power supply. In its box, you will only find a Ligthning / USB-C cable. The device is also compatible with wireless charging and fast charging (18 W). We took 1 hour 25 minutes to carry out a full charge in our Lab. That’s significantly better than the 2020 model, which claimed 2:15 in the same exercise.