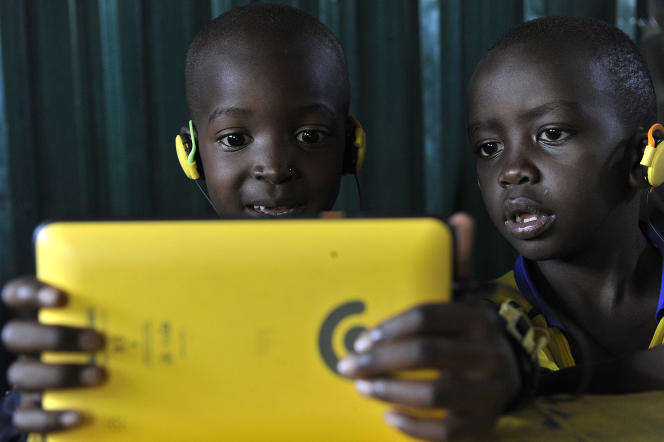 It is a private lesson of a new kind, with touch screens and lines of code. It may take place on a Saturday morning, which is moreover during school holidays, but the children who take part in it do not hesitate. Quite the contrary. Elsie, 11, and her five classmates are coding an animated film. Next week they will learn how to create a mobile app to report domestic violence. The next one, they will produce a helicopter video game.

The workshop is the brainchild of STEM Impact, a digital lab and incubator like Nairobi has so many, which teaches information and communication technology (ICT) in primary schools. “I was the one who asked my parents to enroll me, Elsie said, her eyes glued to the screen. I use the computer a little at school, but only for word processing. I wanted to know more. » At home, the budding geek learns French on her tablet.

the Kenya, nicknamed the “Silicon Savannah” because of its flourishing technological ecosystem, now intends to bet on young talents like Elsie to assert itself on the international scene. Avant-garde, the government has imposed learning the basics of computer coding in primary school this year, hoping to create the high-tech breeding ground of tomorrow.

“We want Kenya to be one of the countries where you can telework in a professional way”President William Ruto said at the Jamhuri Tech and Innovation Summit, December 11, 2022. The next day, on the occasion of the “Jamhuri Day” – the national holiday, this year cleverly renamed “Jamhuri Innovation” to place the celebration under the sign of ICT – he exclaimed: “I’m impressed with the opportunities for digital monetization and remote working. It’s the future ! »

How to transform Silicon Savannah into an African Bangalore, a global technology park? Kenya is already emerging as a “success stories” high tech. East Africa’s economic powerhouse is one of four countries (along with Egypt, Nigeria and South Africa) to which nearly 90% of technology investment on the continent goes. Better still, the major companies in the sector such as Google, Microsoft or Amazon have all chosen Nairobi to set up their African headquarters there, with infrastructure and incubators in their suitcases.

The African “start-up nation” did not wait for Gafam to invest in “tech”. Witness the early rise of M-Pesa, the microfinance and mobile payment system, which nearly 60% of Kenyans use. The telecom giant Safaricom is the standard bearer of the country’s success and is extending its services to the entire region. “We have a large digital workforce, says Alex Magu, president of STEM Impact, which brings the basics of computing and robotics to 500 schools nationwide. In addition, we are highly qualified and have no problem with English. »

You have 50.13% of this article left to read. The following is for subscribers only.