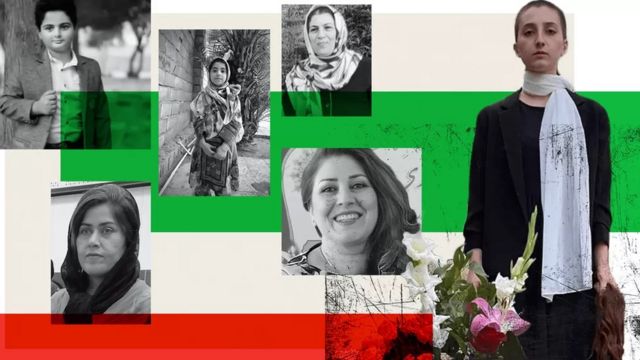 “If I don’t come out to protest, who else will?”

Minoo Majidi’s last words to his family before his death.

Minoo was 62 when she was shot dead by security forces on the streets of Kermanshah in western Iran. According to her daughter, she was killed with more than 178 bullets. She died in hospital.

After Minoo’s death, her daughter Roya Piraei posted a photo on Instagram taken next to her mother’s grave. Her head shaved, she held her hair back in mourning and protest. His act quickly went viral.

“I knew I couldn’t speak. It’s all I could do to show how cruel the regime is,” Roya tells BBC 100 Women.

Roya’s mother comes to add to the list of hundreds of Iranians killed during protests against the death of Mahsa Amini.

The 22-year-old woman of Kurdish origin was arrested for not respecting the compulsory dress code imposed on women. Yes, all women must wear the hijab.

State authorities have acknowledged that more than 300 people have died in the protests, including security forces and government officials. According to Iran Human Rights, on November 29, at least 448 people were killed by security forces, including 29 women and 60 children.

Iran Human Rights thinks the number of victims is “definitely higher”. The organization has received a significant number of death certificates. Investigations are open.

Using effective forensic techniques, BBC teams were able to verify the identities of more than 75 of those killed.

Searching for official documents through online sites and social media, we found death certificates, funeral images and harrowing photos of the deceased. We also spoke to relatives, activists and human rights groups to confirm and cross-check the information we had found.

Our research has confirmed that many of the dead are women and that the majority of those killed are from marginalized ethnic minority groups. There are also children with an average age of seven.

We also found that some people killed were tortured.

It is clear that the death cases are more on the side of minority communities.

“I believe that what is happening in Iran can no longer be assimilated to a demonstration. The situation is taking on worrying proportions,” Roya thinks.

Roya comes from a Kurdish community. Our research has shown that the Kurdish regions, as well as areas with other ethnic minorities such as the Baluchis in the south-eastern province of Sistan Balochistan – record the highest number of deaths.

After verification, 32 of the names we checked came from Kurdish regions, while 20 came from the province of Sistan Balochistan.

Sistan Balochistan is one of Iran’s poorest and most conservative provinces. Most Baluchis belong to Iran’s Sunni minority. According to human rights groups, they face discrimination based on their religion and ethnicity.

Despite his conservatism, in recent weeks women have joined protests in the provincial capital Zahedan. In online videos, women wearing the full veil – the chador – can be seen. They chanted “With or without hijab, on the way to the revolution”.

Hasti Narouei, 7, was also from the Baloch community. In this picture, she is wearing a traditional Balochi dress.

On September 30, she was in Zahedan with her grandmother for Friday prayers. Footage from social media shows security forces firing into the crowd.

According to local activists, Hasti was hit in the head by a tear gas grenade.

She was the only girl in a family of 3 children. She had two brothers. The deceased was due to go to school for the first time next week.

Amnesty International says at least 66 people were killed on the day of Hasti’s death, including 10 children from the Baloch minority community. It was the deadliest day on record since the protests began. Activists dubbed it “Bloody Friday”.

For the BBC teams, finding the identity of those killed in the province of Sistan Balochistan presented a huge challenge.

Being one of the most conservative provinces in Iran, people hardly ever use the internet, especially social media. However, publications on social networks have made it possible to identify deceased persons. Hasti’s family, for example, has not spoken publicly about their daughter in state media. The organ is strictly controlled by the authorities.

After the checks made by the BBC on the 20 people killed in the province of Sistan Baluchistan, the majority did not use social networks. Their post-mortem photos were the only visual that could tell us about their identity.

The role of social media

In a part of the country where people use the internet a lot, social media has helped to draw attention to the high number of deaths.

Fereshteh Ahmadi, 32, from Mahabad in West Azerbaijan province, is one of three Kurdish women we have identified.

On October 26, demonstrations are recorded all over the country. Objective: to mark the 40th day of mourning for Mahsa Amini.

Fereshteh died after being shot by law enforcement. She was hit in the chest. She was on the roof of her house. The government denied the facts.

The intelligence services summoned his family for questioning.

In a photo taken at the funeral, a little girl is seen believed to be Fereshteh’s child. Bawan is in tears. She was holding a handful of soil from her mother’s grave. This image has been widely shared on social media and seen millions of times.

On BBC Persian Instagram alone, the photo has been viewed by over 2.5 million people and received over 198,000 likes.

Protesters in the northeastern city of Mashad have even begun using his image on billboards to highlight the plight of other children who have lost their parents.

no chance to cry

Behind the numbers and images hide families in shock and distress. In most cases, they are unable to express their sadness for fear of reprisals.

“She was athletic and loved horse riding. She even did table tennis!” she says.

“The only hope I have now is that Iran will be free one day. Justice will be served for those who were killed unjustly. The people of Iran deserve to have a normal life.”