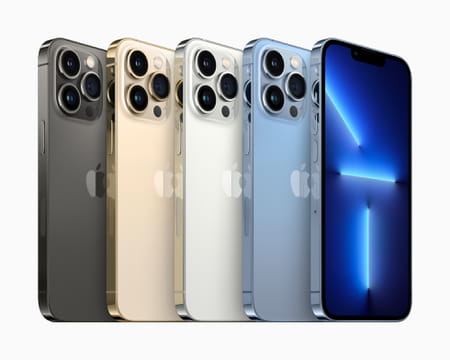 The four new iPhones – iPhone 13, iPhone 13 mini, iPhone 13 Pro and iPhone 13 Pro Max – are equipped with a new processor: the A15 Bionic chip, which will offer significantly more power to the new phone, with better management of the battery in particular.

The iPhone 13 also comes with larger batteries that Apple says will deliver between 1.5 and 2.5 hours of extra use per day. This novelty is partly linked to the installation of the A15 chip. “iPhone 13 has a faster chip, faster 5G, a brighter OLED display, and the most advanced dual camera system ever in an iPhone, and with all those upgrades , the iPhone 13 has a better autonomy”, summarized the vice-president of Apple, Kiann Drance during the Keynote.

The iPhone 13 cameras have also been improved. Besides reducing the notch on the front of the smartphone, a new feature, Cinema mode, will allow video to be shot using the rear cameras and users to change the focus, with a new aperture f/ 1.6, 7-element lens, 26mm focal length. The iPhone 13 Pro and 13 Pro Max also feature a new 3x telephoto lens and an ultra-wide camera that enables macro photography for the first time, for photographing small objects.

On the design side, Apple wanted to bet on an elegant aesthetic, with a thinner notch. Of course, the iPhone 13 has the IP68 splash-proof system. But it is especially on the back of the device that its appearance changes the most. Indeed, the cameras are now in duo, placed diagonally.

Color level, the iPhone 13 reserves new options, such as the creation of the pink iPhone. You can still find the usual colors which are red, midnight black, starlight white and blue. As for the iPhone 13 Pro and 13 Pro Max, the latter are available in alpine blue, graphite, gold and silver. A new colour, called Alpine Green, was added to the catalog at the start of 2022.

Despite very disappointing sales for the iPhone 12 mini, Apple has decided to try the experience again by announcing an iPhone 13 mini. The latter has the same characteristics as its classic version, but in a smaller format, in order to be easy to store and use. It is also available in several colors, as is the case for the classic version namely pink, blue, midnight, starlight and red. The iPhone 13 mini is fully compatible with 5G communication networks, and benefits from iOS 15.

This is one of the many questions Apple answered during its iPhone 13 presentation evening: there is indeed an iPhone 13 Pro and an iPhone 13 Pro Max. As with the Pro version of the 12, the iPhone 13 Pro is again aimed at budding photographers. Better, a filter called “Cinematic Video” transposes the portrait mode, hitherto reserved for photos, to video capture. The 3x mode also offers a wider angle, macro photography style. As for its screen, it measures between 6.1 and 6.7 inches (it all depends on whether you choose the Max option as well).

As a reminder, the iPhone 12 Pro was already an improved version, which notably had an additional photo sensor dedicated to the telephoto lens, as well as a video quality of up to 60 frames per second (compared to 30 on the iPhone). iPhone 12 classic and mini). The other characteristics remained broadly the same as on the other versions.

Like its iPhone 12 released last year, Apple is again offering a Pro model for the iPhone 13. Compared to the classic iPhone 13, it has a smaller notch, but a larger camera module than the original format. Great novelty in its aesthetics, the blue color “Alpin” is entering the small family of iPhone Pro. Compared to theiPhone 12 Pro, there are novelties in terms of its performance, thanks to the use of an A15 Bionic chip, which in particular allows greater battery life. New technology still used, ProMotion is entering the iPhone 13 Pro. This, used by theiPadprompts for greater screen brightness.

iPhone 13: the mini version at a bargain price this weekend!