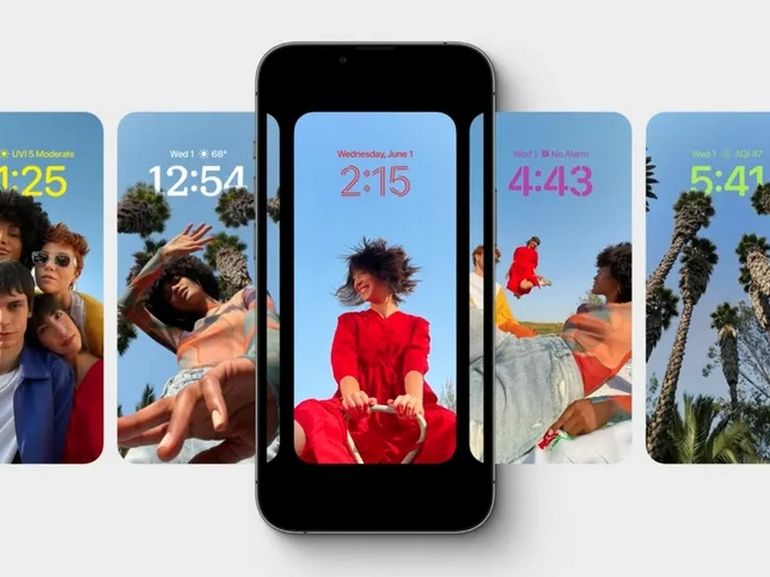 iOS 16 was previewed at WWDC and is now available for developers to download. The new update will work on iPhone 8 and newer and will likely launch alongside theiPhone 14 this autumn.
iOS 16 offers a lot of much-awaited features, like the ability to customize your lock screen or edit sent iMessages. And when you look closely,
iOS 16 could also reveal some clues about the iPhone 14. Indeed, clues are buried in the code of the update and we will make them speak.

iPhone 14 could have always-on display

Always-on display is a handy feature found on many Android phones, and even theAppleWatch. Unfortunately, it is still missing on the iPhone. But
9to5Mac says it has discovered several references in iOS 16 that suggest support for an always-on display could be part of the iPhone’s future. The site found references to backlight management tools as well as hidden markers for engineers that might allow them to test functionality on a
iPhone 13 Pro.

However, the always-on display might be limited as the screen refresh rate would have to drop to 10Hz or even lower to consume less power, which is much lower than the typical 60Hz refresh rate of the iPhone. The Apple Watch’s always-on display operates at 1Hz, which is not supported by any current iPhone and suggests it will debut on
iPhone 14 Pro and 14 Pro Max.

And even without those clues in the code, the revamped and customizable lock screen also hints at an always-on display. Specifically, the way iOS 16’s notifications are grouped together at the bottom of the screen suggests to us that Apple is experimenting with ways to preserve screen real estate as the always-on display only uses specific parts to preserve energy.

Another potential clue is iOS 16’s new lock screen widgets. They are more like Apple Watch complications and are therefore easier to read.

One of the more subtle features of iOS 16 is Visual Search, which can identify objects, people, pets, and landmarks in photos and provide additional information or context. A nice addition this year is the ability to tap and hold the subject of an image to detach it from its background and place it in another app or create a collage. It is possible that the cinematic mode will be perfected thanks to the machine learning that powers this new tool. Subjects could be “cut out” more precisely and backgrounds would have a more consistent out-of-focus look. Apple could also use technology to make cinematic mode more like portrait mode, such as changing the background to a black color or placing the subject on a white background.

A Pro mode for the Camera app

It is very likely that the cameras of the iPhone 14 will be better than those of the range
iPhone 13. Much of these improvements will likely come from computational photography features like SmartHDR and Deep Fusion, which tie directly into the processor that powers the smartphone. Thus, an iPhone 14 with an A16 chip should theoretically have new photo functions or improved processing techniques.

Apple’s addition of a customizable lock screen in iOS 16 has us hoping for a redesign of the Camera app on the iPhone 14 Pro and 14 Pro Max. Indeed, new pro features like ProRaw and ProRes video recording can make the Camera app interface a little cramped. Maybe there will be a Pro mode that can be toggled on and off and offer shortcuts to change camera settings on the fly.


Find here our social media accounts as well as other pages related to it.https://yaroos.com/related-pages/