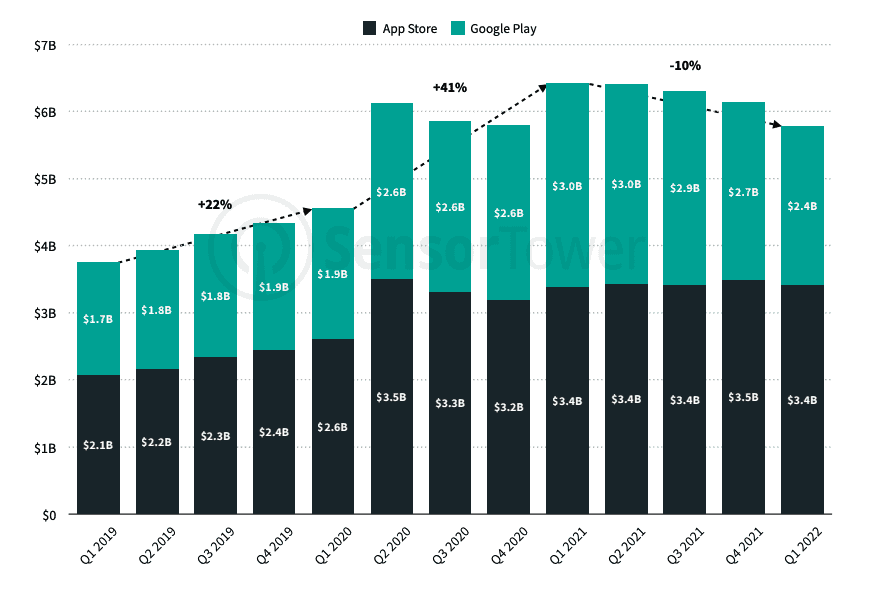 Inflation is a problem in the United States and around the world, with the inflation rate in the United States near its highest level in 40 years. In April, the consumer price index, which measures what consumers pay for goods and services, rose 8.3% from a year earlier and 0.3% for the month. The Federal Reserve has started to raise interest rates and will soon begin shrinking its balance sheet to fight inflation and try to get prices under control. These measures may be necessary, but they are also the ones that worry Wall Street. Goldman Sachs analysts estimate there is a 38% chance that the US economy will enter a recession within the next 24 months. Deutsche Bank also predicted a recession.

Inflation in 2022 has the potential to send some startups into hypergrowth and others into ruin.

At the same time, other uncertainties are weighing on investor sentiment. Russia’s war in Ukraine is ongoing, which could exacerbate inflation, supply chain issues and fluctuating oil prices contribute to a general sense of unrest. Slowing growth in China and worries about the impact of Covid-19 outbreaks there are also contributing to worries.

The U.S. mobile games industry fell for the first time in history in the first quarter of 2022 as spending fell 10% to less than $6 billion for the first time in a year. Consumer spending onAppStore remained stable during the first quarter of 2022. The overall decline is mainly driven by the poor play of monetization performance on Google Play. Consumer spending on Google Play fell 22% year-over-year, losing $655 million in gross revenue.

Android users have, on average, less income in the United States compared to iOS users. Inflation and the rising cost of living may be the cause of declining gaming revenue on Google Play. Despite a decline in Q1 2022, the United States remains the leading market for mobile games. Its revenues have more than doubled since the start of 2018.

Several tech companies recently announced hiring freezes and layoffs. The impact can be attributed to the pandemic expansion of these companies and the anticipation that it will be more difficult to obtain capital as public market valuations fall. The parent company of Facebook, Meta, is suspending hiring and cutting some hiring plans, Insider reported last week based on an internal memo it viewed. Meta’s hiring freeze is partly due to Apple’s iPhone privacy changes, which hurt Meta’s ability to target ads. Amazon’s chief financial officer told analysts during the company’s earnings presentation that its warehouses were “overstaffed”, following a major hiring spree amid widespread shutdowns that pushed more and more more consumers towards online shopping. Amazon is a slider and showing they are being cautious because people are going to be more cautious about what they are buying.

Uber’s CEO told employees in a message obtained by CNBC that the company “would treat hiring as a privilege and be deliberate about when and where we add staff”adding: “We will be even more intransigent on costs at all levels”. Robinhood recently said it was cutting about 9% of full-time employees to eliminate overlapping job functions after a large hiring surge. Peloton, which was a hit during the pandemic earlier this year, announced it would cut its workforce by around 20% as part of a cost-cutting measure. Celebrity video app Cameo recently announced a series of layoffs amounting to around a quarter of its staff.

AT&T has announced price hikes for its older mobile plans and is encouraging subscribers to upgrade to the carrier’s new unlimited plans. Although AT&T did not specifically blame inflation in its statement, the company acknowledged the impact of the 8.5% inflation spike on its business. “There is no doubt that there is pressure on a large segment of goods and services, and we are not immune to this. I don’t think anyone in the industry is immune to that, and that’s not a good position”said CEO John Stankey.

Experts say the factors weighing on the tech industry are unique to a sector that has grown rapidly throughout the pandemic and do not necessarily indicate a broader downturn. If layoffs in the tech sector become more common, it could have effects throughout the economy.

Applications, regardless of category, are going to have to do more than provide a service. For example, it will be necessary to take advantage of personalization, to shorten the laborious processes of opening an application, onboarding must be simple and fast, especially if the choice of an application becomes critical. First Foundation Bank has launched a new mobile app that uses predictive AI to help customers merge data from all their accounts and proactively plan and anticipate issues such as overdrafts, this increases the value proposition for customers. clients. Those who have removed their offices and are all working from home will have a definite advantage, especially now that we all know how to work remotely as a team 🙂