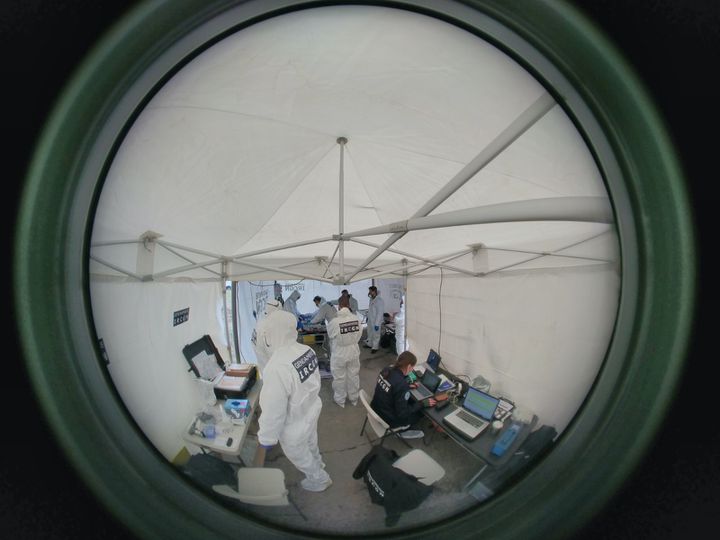 We are in the parking lot of a secure site somewhere in kyiv, the exact location to remain secret. Under a tent, near a large white van with the IRCGN (Institute for Criminal Research of the National Gendarmerie) logo, Amaury Pussiau, squadron leader and expert in genetic fingerprints, welcomes us: “Actually, here you are at the mobile DNA laboratory”. This is where the 18 IRCGN gendarmes sent by France to Ukraine have been working for a month to help identify the victims of the war.

“We receive here all the biological samples that have been taken at the level of the morgue on unidentified bodies, continues Amaury Pussiau. We will use a swab on which we will collect some blood, and that will allow us to obtain the genetic profile. The French gendarmes thus made it possible to identify more than 200 bodies, almost exclusively civilians taken from the pits of Boutcha or recovered from the surrounding morgues.

This mobile laboratory makes it possible to go quickly: 30 to 45 DNA profiles come out of it every day. So, when a hundred Ukrainian families appealed to the authorities to try to find their loved ones, among the corpses in the kyiv region, it was to the French gendarmes that we turned, says the head of squadron: “We take DNA samples from family members, it can be a brother, a sister… Then we give the Ukrainian authorities all these results.”

Allowing to restore an identity to these remains is a real source of satisfaction for François Heulard, at the head of the operation: “There are moments that remain etched forever.”

When we have the families who give us a little packet of sweets because we took their DNA and we give them hope of finding the bodies of their missing… These are special moments, when we know why we is here and why we do what we do.”

“The fact of being able to identify victims and to come to kyiv to do so is a source of pride. We feel useful, adds Amaury Pussiau, it is a colossal job”. This mission ends this Friday, May 13. The white van is about to leave for Pontoise (Val-d’Oise). The gendarmes will drive three days in the opposite direction.

These French soldiers had been approached directly by the General Prosecutor of Ukraine. The identification of bodies is their specialty and makes them internationally renowned, explains Colonel Francois Heulard: “OUnfortunately, over many years we have developed expertise in the identification of victims of disasters, whether in the crash of the Germanwings, or on the occasion of attacks in France or in Africa. This team of 18 experts is recognized worldwide.” “We are also accustomed to cope with significant levels of degradation of the bodies, specifies the squadron leader Amaury Pussiau. If ever the body is burned or degraded, we can still take a small bone sample which will allow us to make a genetic profile from a core sample.

To all this must be added the presence of a mobile forensic institute to determine the causes of death. It is equipped with radio equipment making it possible to locate, for example, bullets inside a body, as well as the in-depth study of crime scenes to understand, in particular, from which side an explosion came precisely.

What happens to this information, these identification elements? The analyzes take place in another building. Upstairs, in an improvised office, a table on which a huge pile of documents is piling up. “There, we draw up a complete inventory of all our reports to submit to the Ukrainian authorities, describes François Heulard. Hundreds of reports. It’s tedious but you have to get on with it!” Because these elements constitute independent investigative work intended, in the long term, to be transmitted to the International Criminal Court (ICC) to feed its investigation into possible war crimes. It is for this purpose too that the French gendarmes worked in support of the Ukrainian teams.

After a month in Ukraine, as their mission comes to an end, many gendarmes have the feeling of a duty accomplished. But this month has been tough. As for this team that we meet back from Boutcha with, still, the bodies of victims to examine. A psychological follow-up is planned for these forensic gendarmes, assures Colonel Heulard: “We are not let go like that, there is support that is in place to prevent the return from being too brutal. There is a psychologist who will follow us, too”.

In the meantime, the team offers itself a moment of relaxation between comrades in these premises which have also been used as accommodation for a month. The bedrooms are there, all along this large hallway. One of the colonels has taken out his guitar and is humming the words to a song by Francis Cabrel. Last notes for these French gendarmes before leaving kyiv and returning to the West, in the next few days.

In Ukraine, the pride and emotion of the French forensic gendarmes sent to identify the victims: “We feel useful”