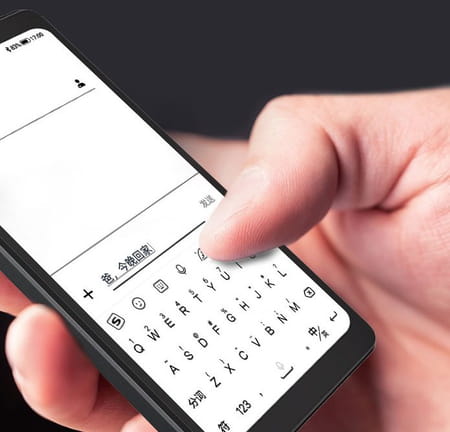 The Chinese manufacturer Hisense stands out with an original smartphone equipped with an e-ink screen (electronic ink), as on reading lights. The key is excellent text readability and extended battery life.

While current smartphones tend to all look the same, Hisense has decided to play the difference on its brand new A9. In fact, rather than carrying a classic LCD screen (IPS version), like most mobiles, or an Oled (Amoled) type panel, like the more luxurious models, this phone is equipped with a system of e-ink display (sometimes spelled E ink or eink), an electronic ink technology found mostly on e-readers. This is not the first smartphone equipped with this technology – we are thinking of the famous YotaPhone, a two-screen model including an e-ink released confidentially ten years ago, or even the A5 Hisense marketed discreetly there is three years – but this choice, to say the least original, makes the A9 a resolutely singular device, with advantages and disadvantages.

Thus, the A9 Hisense is equipped with a 6.1-inch diagonal “monochrome” E Ink Carta 1200 screen, displaying 16 levels of gray with a resolution of 300 pixels per inch. An impressive density that exceeds that of conventional screens to match the resolution of printed publications (magazines, for example). As on an e-reader, reading comfort is therefore in principle excellent (no eye fatigue), especially since electronic ink technology is based on the reflection of ambient light and not on emissive lighting, like traditional screens – which does not prevent the integration of a backlighting device to be able to read in the dark or in the dark. Another advantage of electronic ink: very low energy consumption (only for refreshing the display and even none when the image is “fixed”). With, as a direct consequence, a great autonomy, since the screen drains the battery much less than other technologies. We can therefore hope that the A9 really works for several days without needing to be recharged.

For the other technical aspects, the A9 remains a very classic, not to say banal, smartphone, with a sober but all-purpose design, an all-in-one Snapdragon 662 processor associated with 4 or 6 GB of RAM, up to 128 GB of storage, a 4,000 mAh battery, a fingerprint sensor located on the edge, 4G, Wi-Fi and Bluetooth, all running with Android 11. Nothing is known, however, of its sensors photo, which may seem very incidental, even difficult to use. Because if the A9 is ideal for reading messages, “office” documents or articles on Web pages, it is, alas, not at all suitable for displaying photos or videos or even ordinary games or applications, due to the lack of colors. In short, it is a UFO smartphone, marketed only in China for the moment (at a price equivalent to 250 euros), which will only be suitable for a very particular and informed public.

Hisense A9: an e-ink screen smartphone like an e-reader


Explore our social media accounts and also other pages related to themhttps://yaroos.com/related-pages/