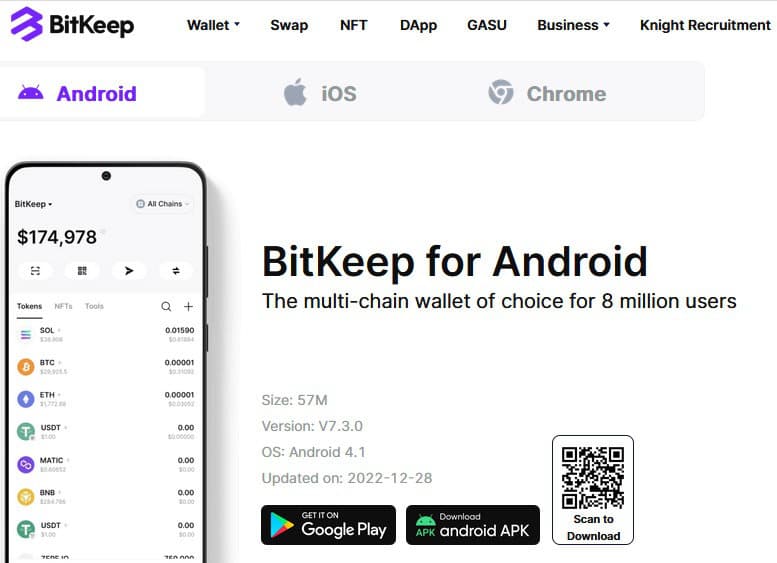 It’s an end-of-year surprise that we would like to do without. On December 26, several users of the platform BitKeep saw their wallets empty without further explanation. Remember that BitKeep is a “wallet”, a software that allows you to place your cryptos directly in the blockchain and not on platforms sometimes managed anyhow by “crypto bros” who take themselves for Elon Musk. A secure system then? Not really since a hacker managed to place a corrupt BitKeep app directly on the company’s official website!

On the company’s Telegram, the information falls: hackers have managed to divert transfers thanks to this corrupt APK, installed in good faith by certain members.

According to experts, the loss is estimated at more than $9 million for the moment. We find, among other things, in the diverted values, Ethereum, but also DAI or BNB. The breach concerns version 7.2.9 of the Android version of the application. Versions accessible from the Google and Apple stores are not affected. Let’s remember thatinstalling an APK is not without riskbut we are still supposed to trust the publisher when it makes an application available on its official site!

In reaction to the attack, the app teams asked users to transfer all their funds to secure platforms, downloaded from official stores. Members were also asked to change their wallet addresses or generate a new one. Finally, a security update has been deployed by the BitKeep teams. But how the hell did a corrupted APK end up on the official website?

BitKeep CEO Kevin: The whole team and I are pulling all strings we can and going to great lengths to recover the stolen assets. And for the loss in this incident, I assure you that we will give you a satisfying solution.

Because this is not the first time that BitKeep has been attacked. In October 2022, an incident had already undermined BitKeep Swap, with an estimated loss of over $1 million. Bad times for wallet managers, who seem to be becoming the favored target of hackers. It must be said that while more and more people are interested in cryptocurrencies, few are trained in security. So be careful when hosting your cryptos! For us, the most secure solution remains the Ledger cold wallets. And it’s French…