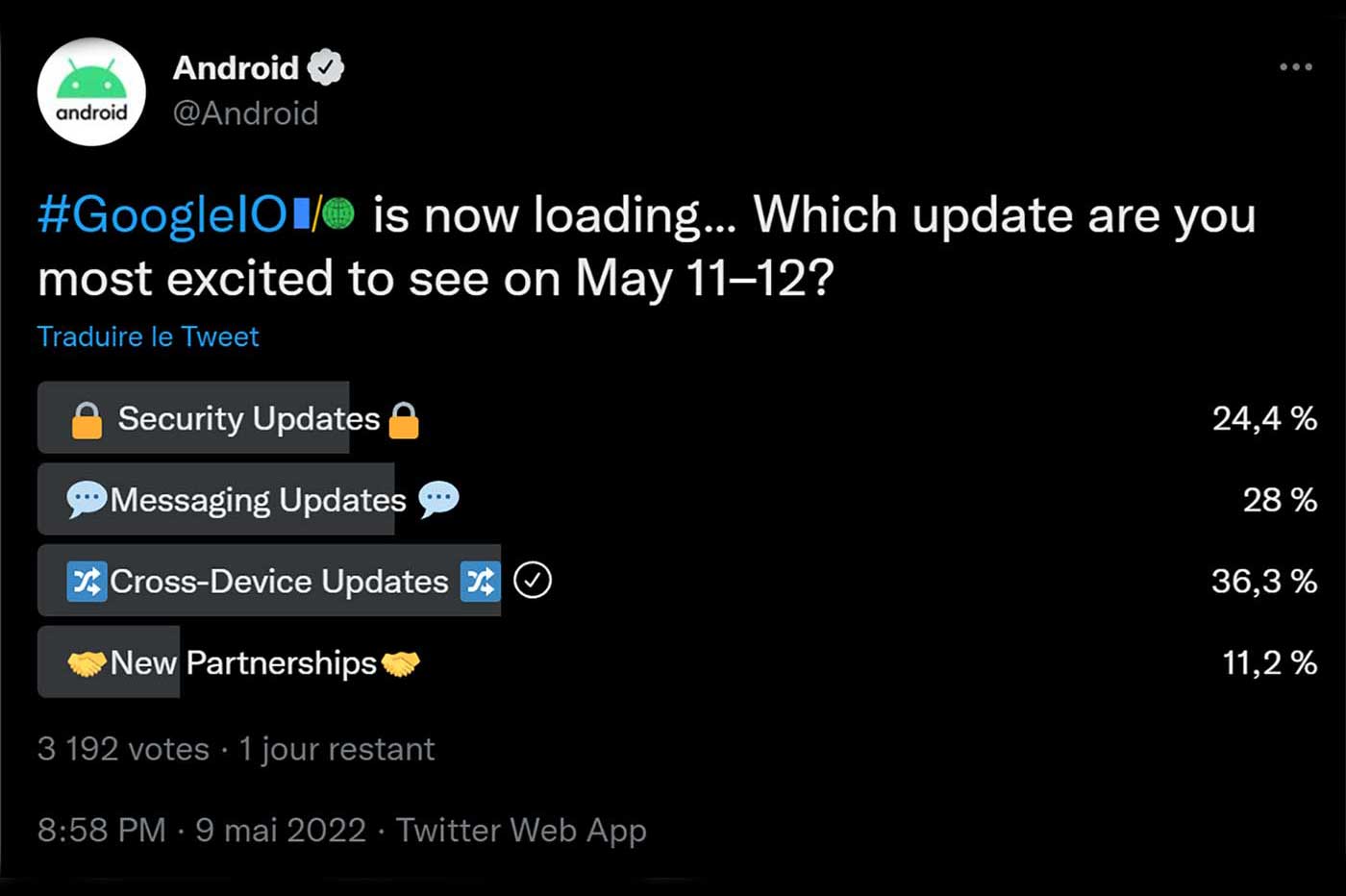 A few hours before its I/O 2022 event, Google is talking about the new features that could be presented by the Android team. Many devices, not just those running Android 13, will be affected.

Last straight line for Google before the I/O 2022 conference who promises to be full of announcements. The event dedicated to developers will begin on May 11 and should allow Google to formalize new products (Pixel Watch, Pixel 6a, etc.), but also to take stock of Android. All eyes are on Android 13 which recently moved into public beta; but not everything revolves around the Android 12 suite. The Mountain View company regularly presents new features that it deploys on a large number of devices, regardless of their version number.

Hours away from their big event, the Android team asked on Twitter “Which update are you most looking forward to on May 11-12? ». She proposed four options : security updates, messaging-related updates, cross-device updates and new partnerships.

At the time of these lines, these are the ” cross-device updates which come first and recall the announcements made at CES 2022. At the start of the year, Google announced its desire to facilitate connection between the devices in its ecosystem. It was then a question of being able to “quickly configure” a computer under Chrome OS using an Android smartphone; or to offer Fast Pair and Nearby Share on Windows PCs. While the firm has just made its file sharing function Nearby Share more convenient ; I/O 2022 could allow him to discuss these new features and a launch date.

About the ” email updates “, Google is stepping up its efforts to weigh in this area. The I/O conference is generally an opportunity for the firm to discuss upcoming innovations on its Google Messages and Duo applications. After rumors at the end of the year, the giant confirmed in March that it was going improve iPhone support to display reactions from iOS users in the form of emojis. Remember that Google is seeking to advance the RCS protocol, which it presents as the successor to SMS.

The acesecurity is a recurring theme on Android and each new version is an opportunity to bring a handful of new features. Finally, it is difficult to know that they are the ” new partnerships which could be announced during this event. Personalization should also feature prominently with announcements about Material Design. Visual novelties are to be expected, if we are to believe this survey proposed by the official Material Design account:

✨ Material Design is coming to #GoogleIO! ✨

What are you excited about?

You won’t have to wait very long before discovering Google’s ads. The Google I/O 2022 conference kicks off tomorrowWednesday May 11, with an opening conference at 7:00 p.m.


Explore our social media accounts and other related pageshttps://yaroos.com/related-pages/