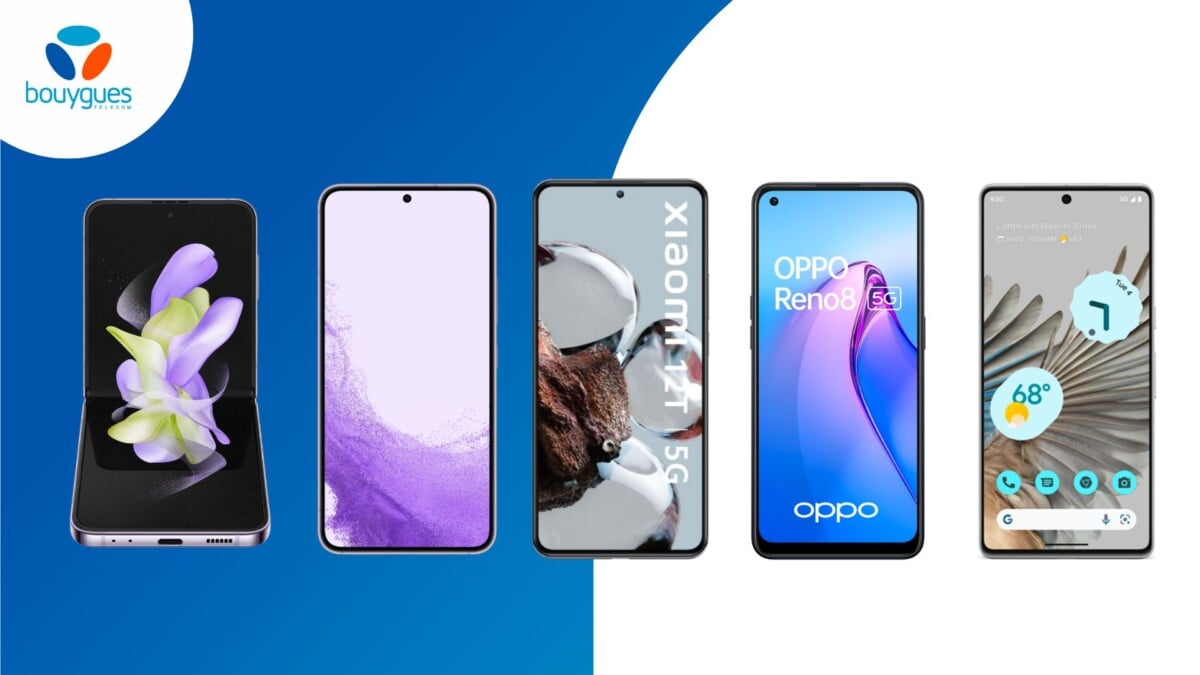 For yourself or your loved ones, Christmas is the perfect time to offer a new smartphone. Especially when Bouygues Telecom drops the price of the flagship models of the year 2022.

Dropping a premium smartphone under the tree is usually a guarantee of making someone happy. Even if offering a top-of-the-range telephone is expensive, Bouygues Telecom unveils particularly attractive offers on the occasion of the end-of-year celebrations.

The Samsung Galaxy Z Flip 4 is 13 euros per month

Launched last August, the Samsung Galaxy Z Flip 4 is particularly appreciated for its compactness and lightness (187 grams). However, this foldable smartphone makes no compromises and offers both comfort and performance, with its large 6.7-inch AMOLED FHD + 120 Hz screen, its secondary 1.9-inch screen and its Qualcomm Snapdragon 8+ Gen 1 chip. On the photo side, it goes to the essentials with a dual 12-megapixel rear sensor and a 10-megapixel front camera.

Rated 8/10 during the test conducted by Frandroid, the Samsung Galaxy Z Flip 4 is displayed at only 469 euros at Bouygues Telecom with the 200 GB mobile plan. Until December 13, the operator also offers financing over 36 months at the rate of 13 euros per month, after an initial monthly payment of 1 euro.

The Samsung Galaxy S22 is 10 euros per month

Rated 8/10 during tests carried out by Frandroid, the Samsung Galaxy S22 is a flagship model of the South Korean brand. Announced last February, this high-end smartphone does not overlook any area. It displays solid performance with its Exynos 2200 chip, and benefits from a very beautiful 6.1-inch AMOLED FHD + 120 Hz screen. But the Galaxy S22it is also and above all a very good photophone equipped with a triple sensor of 50, 20 and 10 megapixels.

Until December 13, Bouygues Telecom offers the Samsung Galaxy S22 at the reduced price of 361 euros instead of 789 euros with its 200 GB mobile plan. It is also possible to pay it in 36 monthly installments of 10 euros, after an initial payment of 1 euro.

The Oppo Reno 8 is 3 euros per month

Particularly recent, theOppo Reno 8 was launched last August and quickly stood out for its excellent value for money, which earned it an 8/10 rating in Frandroid tests. If it is versatile in photos with its 50 megapixel sensor, its 8 megapixel ultra wide-angle and its 2 megapixel macro, it was above all praised for its beautiful 6.43-inch AMOLED FHD + screen and for its 80 W fast charge. Enough to recover 90% of the battery in just 30 minutes.

Until December 25, Bouygues Telecom is driving down the price of the Oppo Reno 8 from 549 to 73 euros with its 200 GB mobile plan. The operator also offers the possibility of paying for this smartphone in 24 monthly installments of 3 euros (after a first payment of 1 euro).

The Xiaomi 12T is 8 euros per month

The latest from the Chinese brand, the Xiaomi 12T debuted last October. Very well equipped, it brings together everything you would expect from a high-end smartphone. It is powered by a Mediatek Dimensity 8100-Ultra SoC source of good performance, and benefits from a large 5000 mAh battery compatible with 120 W ultra-fast charging. The rest of the technical sheet is equally impressive with a 6.67-inch 120Hz AMOLED display and a 108-megapixel camera.

From December 12 to 25, with its 200 GB mobile plan, Bouygues Telecom drops the price of the Xiaomi 12T from 649.90 to 193 eurosand allows the payment to be spread over 24 monthly installments of 8 euros (after a first payment of 1 euro).

The Pixel 7 is 4 euros per month

Google launched last October its Pixel 7, which also brilliantly passed the Frandroid test (9/10). This smartphone stands out especially on the shutter of the photo. Equipped with a 50-megapixel main sensor and a 12-megapixel ultra-wide-angle sensor, the Pixel 7 benefits from image processing considered to be one of the best on the market. This smartphone is also very efficient with its Tensor G2 chip made by Google.

In addition to these great promotions on smartphones, the operator offers a discount of 50 euros on a selection of accessories. Enough to take advantage of a connected watch or wireless headphones at a low price in addition to your smartphone.

Here is our selection of the best deals on accessories, provided you have opted for the 200 GB plan with a smartphone:

The heart of Bouygues Telecom’s Christmas offer lies in its 5G 200 GB mobile plan. To take advantage of discounts on smartphones and accessories, simply subscribe to this subscription with premium features (with a commitment of 24 hours). month).

This generous offer is therefore perfect for big data consumers looking for a recent high-end smartphone, and who do not want to lose all their savings in one fell swoop.