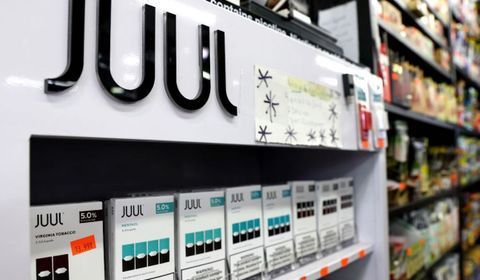 Do you know Juul electronic cigarettes, which look like USB keys? On June 23, the US Food and Drug Administration (FDA) issued a temporary ban on these products on the US market. A decision hailed by health professionals.

Whereas the electronic cigarette is more and more debated, the FDA decided on June 23 to temporarily withdraw Juul electronic cigarettes from the American market. The reason ? The lack of data on the toxicity of the products. The danger that electronic cigarettes would represent, especially for the youngest, worries the health authorities all the more. In fact, these products have become ubiquitous in the daily lives of young people.

“We recognize that e-cigarettes have played a disproportionate role in increasing the number of young smokers”says FDA Commissioner Robert M. Califf, MD

Juul-branded products can therefore no longer be sold in the United States, and those already present in stores will have to be removed. The affected products are four in number: Virginia tobacco flavored pods with nicotine strengths of 5% and 3% and menthol flavored pods with nicotine strengths of 5% and 3%. However, the FDA does not restrict the possession or use of the brand’s products by citizens who have already purchased them.

No evidence to dispute the toxicity of the products

To justify its decision, the FDA explains that the Juul brand had no “provided sufficient evidence to assess the potential toxic risks associated with the use of its products”.

“Like all manufacturers, JuuL had the opportunity to provide evidence that demonstrated that the marketing of their products meets the standards set by law. However, the company did not provide this evidence and left us with important questions. Without data necessary to determine the relevant health risks, the FDA issues these marketing denial orders,” says Michele Mital, acting director of the FDA’s Center for Tobacco Products. This decision remains temporary, however, as the FDA is waiting to receive additional documents from Juul.

A decision applauded but deemed insufficient by the medical community

Several American medical institutions reacted positively to the announcement of this ban. Among them, the American Thoracic Society (ATS)who was delighted with this decision – which she had been waiting for for a long time – in a press release dated June 23.

“Juul is one of the most popular e-cigarette products among middle and high school students.observes Hasmeena Kathuria, chair of the ATS Tobacco Action Committee. Their flavored products are particularly appealing to this group, which is at risk of becoming lifelong nicotine users. The removal of Juul products, even temporarily, constitutes a small but significant dent in sales to this vulnerable population group.”

However, the ATS deplores the rationale for the FDA’s decision, “based largely on a technical dispute over toxicity data, rather than Juul’s appeal to young people”.

In addition, “nor was the agency’s decision based on the levels of highly addictive nicotine salts found in Juul products, or the likely negative health effects of long-term use of e-cigarettes.”always finds theAmerican Thoracic Society. In fact, the FDA still authorizes the marketing of other electronic cigarettes on the American market.

Deeming the decision insufficient, the ATS will continue to “advocate for FDA reform or stronger regulation to protect young people from the dangers of vaping products from Juul and other e-cigarette manufacturers”Dr. Kathuria concluded.